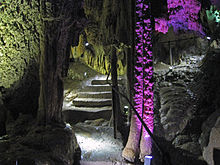 Limescale deposits in the cave

Calcified tree trunk "crocodile" in the lower half of the cave

The Höllgrotten are a group of stalactite caves in the Lorzentobel near Baar in the canton of Zug .

The caves have small lakes, stalactites , stalagmites and stalagnates in various colors. They have been formed from calcareous springs over the course of millennia. Each cave has its own picture. In the root grotto in the upper part of the cave, encrusted tree roots can be seen.

The locals have always called the area "Höll", which originally came from "Hell" because it meant a "forest clearing in the Lorzentobel". Gradually, "Höll" acquired its current meaning because the ravine was remote and sometimes dark. Around 1860, pastor Johann Josef Zehnder von Neuheim tried in vain to talk the population out of the name "Höll". When the caves were discovered in 1863, it was completely clear that demonic forces must have been at work here. When looking at the stalactite formations, people thought more of magical, magical powers.

The Höllgrotten differ from all other stalactite caves in the world. Other grottoes were created in the massive rock bedrock by water flowing underground, which each took millions of years; the Höllgrotten, on the other hand, formed on the surface in the comparatively short time of around 3000 years and they are relatively "young".

How cave formation came about

After the end of the last ice age, around 18,000 years ago, glacier rivers from the Ägerital formed a gorge that finally reached deep into the bedrock: the Lorzentobel.

The water that seeped away in the four and a half kilometers uphill moorland Neugrund in Menzingen, dissolved a lot of lime on its ten-year underground path and emerged from the ravine flanks in large springs at the point where the Höllgrotten are today. The lime-rich spring water flowing off the surface deposited large amounts of lime on the slope when it emerged and between 8500 and 5500 years ago built a huge, 30 m high, 50 m deep and 200 m long spring tuff mountain.

When spring water with a high concentration of limestone emerges, moss pillows, ferns, twigs, leaves and sand - spring tuff, a so-called secondary rock, forms on the surface. (This process can still be observed today if you come from Baar and walk a few hundred meters uphill past the caves. The place is signposted.)

The tuff grew further and further out into the bed of the Lorze river, whereupon the Lorze washed away the slope. Niche-like cavities and overhanging areas formed. At one point it collapsed, the sagging rock enclosed a cavity in the area of ​​today's cave exit. The remaining parts of the caves were gradually enclosed: escaping spring water formed curtains of roots and moss, which quickly grew and petrified. In the caves created in this way behind the tuff curtain, stalactites formed.

How the stalactites were made

Sintered lime flags made of finely crystalline travertine can be seen on the walls, created by the constant trickling of spring water.

The pillars in the "magic castle" are stalactites that have thickened towards the bottom. Petrified roots can be seen in the “root grotto”: because the cave ceiling is only around two meters thick, the roots of individual trees, especially sycamore maples, penetrated into the grotto; these aerial roots absorbed moisture from the air and supplied it to the tree. They are now petrified.

For thousands of years the Höllgrotten contained a cave lake with a stable water level. Even today, a horizontal cornice on the walls clearly shows where the water surface was. Above that, lamellar rock can be seen (so-called calcareous sinter flags), and under the water level at that time, the lime was deposited in grapes.

Why the caves have been drained

As early as 1888, the springs that had shaped the tuff body in the Höll and led to the formation of a grotto were captured in a tunnel by the spinning mill on the Lorze. This drained the tuff mountain and stalactite formation came to a standstill. Since 1904, the excellent quality spring water from the so-called Kohlboden spring intake has been fed into the drinking water network of the city of Zurich. The very rich spring delivers 4,000 to 6,000 liters per minute. It reacts to heavy precipitation with a delay of half a year. A full ten years have passed before the water has made its way from the infiltration area to the source.

A grotto, however, needs moisture; the stone structures have been artificially sprinkled since the spring was set so that they do not become brittle. The temperature in the grotto is stable around 10 ° Celsius in summer and winter.

The light and porous tuff deposited in the Lorzentobel was easy to cut and was dismantled in the 19th century for building purposes, for example to line the railway tunnel near Bonstetten in the Knonaueramt. In the course of this work, the first grotto was discovered in 1863. It was difficult to access because of the underground lakes. Fortunately, the tuff mining was stopped so that the grotto could be preserved. In 1885 the son of the discoverer, Councilor Josef Leonz Schmid , ordered the construction of a tunnel to drain the cave lake into the Lorze. The Höllgrotten have been open to the public since 1887; In 1892 and 1902 further parts of the caves were discovered. Councilor of States Schmid bought the adjacent land so that in 1903 he could merge all the caves and preserve the grotto system for posterity.

In 1917, an artificial connecting tunnel was created between the lower and around 40 meters higher cave group, so that the entire Höllgrotten can now be visited in one tour. Since spring 2012, the grottos have been re-lit with the latest LED technology. As a result, the variety of shapes and colors of the stone is visible to visitors in all nuances for the first time.