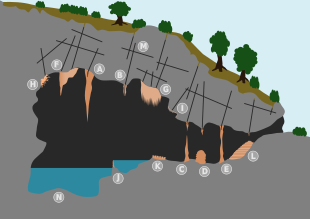 A stalagmite is a speleothem in which dripping carbonated water, which calcite deposits, creates a stalactite that can take on various shapes. The intensity of the drip point, but also the height of the dropping water and the nature of the soil have an influence on the shape of the stalagmite.

The height of fall, in turn, has an impact on the upper end of the stalactite. A rounded end is created when the water falls low; as the height of fall increases, the end becomes flatter and in extreme cases can be curved inward.

Furthermore, there are stalactite shapes that deviate from these basic values, such as a stalagmite in the Schulerloch , the tip of which is shaped as a water basin, or the Vesuvius in the Eberstadt stalactite cave , which was formed by carbonated water, but is now slowly being removed again by carbonated water.

The analysis of stalagmites can chronologically record the deposition process and thus allow conclusions to be drawn about paleoclimatology and vegetation history.