Stalactite (A) and sintered tube (B)

Stalactites in the Treak Cliff Cavern (Derbyshire in England) 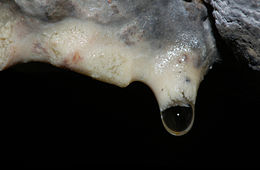 A drop on the cave ceiling with calcium deposits

A stalactite is that of the ceiling of a cavity hanging stalactite , its counterpart is the up from the ground monitored stalagmite (mnemonics see stalactite ). Both names are derived from the ancient Greek στάλαγμα (synonymous with σταλαγμός, "drop").

Like all stalactite formations, stalactite is formed when carbonated water penetrates the rock and, due to surface tension , deposits calcite on the ceiling of a cavity . The resulting material is called sinter . If, due to the shape of the surface, a drop always emerges at exactly the same point, the deposit can form a ring with the drop size as its diameter. This formation can grow into a sintered tube, also called macaroni .

A stalactite arises from the fact that drops no longer run off inside the tube, but on its outside and deposit calcite - the growth in thickness has started. When examining a stalactite, the sintered tube can often still be detected inside.

There are also rarer forms in which a stalactite grows without a previous sintering tube, here the surface shape of the cave ceiling plays the decisive role so that the thickness growth begins without a lead structure.

The size of a stalactite is limited by its own weight, which will eventually tear it from the ceiling. A stalactite is always significantly slimmer than a stalagmite on the ground. If the stalactite finally grows together with the stalagmite, a stalactite column, called a stalagnate , is formed. At more than seven meters, the largest stalactite ever discovered in Europe is located in Doolin Cave near Doolin in County Clare , Ireland . It was discovered by two adventurous people in the 1950s and opened to the public in 2006.

Stalactites and other stalactite forms can also form on older structures if calcium hydroxide is dissolved from cement or concrete and then reacts with the carbon dioxide in the air (for description and experiments see literature).

Stalactite vaults (muqarnas) are a stylistic element of oriental architecture, for example on scissors (balconies) of minarets.