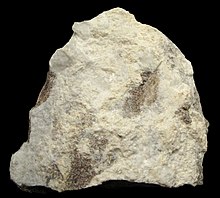 Calcium hydroxide is formed with strong heat development ( exothermic reaction ) when calcium oxide is mixed with water. This process is also called lime drying . The heat development is so strong that some of the water also evaporates (colloquially known as "smoking").

It is also possible to display it by reacting aqueous calcium salt solutions with alkaline solutions (for example calcium nitrate with potassium hydroxide ).

Calcium hydride or calcium itself reacts violently with water to form calcium hydroxide and hydrogen . 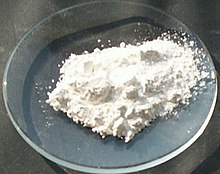 Calcium hydroxide has a strongly basic reaction, although it is not very soluble : The pH value of a saturated solution is 11–12.6.

The main use of calcium hydroxide is the preparation of mortar in construction. It is used there under the name of white lime hydrate (DIN 1060). Lime plasters consist of mixtures of calcium hydroxide and sand. The latter can also be added in the form of ground limestone . Asphalt mix is also increasingly being added to improve the durability of the finished asphalt layer.

The antiseptic , caustic effect, which hinders the growth of pathogens and mold , is the reason why slaked lime was previously used to disinfect stables (the "lime" of stables).

In conjunction with soda and lubricating soap , slaked shell limestone is processed into Tadelakt , a hydrophobic lime plaster for wet rooms .

Slaked lime is used as an alternative to limestone in flue gas desulphurisation , as it forms calcium sulphate (gypsum) with sulfuric acid . The amount used is around 1.8 times less than for limestone. The resulting plaster has a whiteness of 80% and can be used commercially. Due to its high reactivity, lower consumption quantities are required. The disadvantage is the higher price compared to limestone.

In the food industry it is added to foods as an acidity regulator and is generally approved in the EU as a food additive with the designation E 526 without maximum quantity restriction ( quantum satis ) for food.

It is also used as a drug in dentistry , primarily for disinfecting root canals and cavities and for stimulating new dentin formation.

It is part of the soda lime , which is used in anesthesia machines or diving machines with rebreathing to eliminate carbon dioxide from the exhaled air.

Calcium hydroxide is also used as a pesticide in fruit growing . Here it is used, for example, as a fungicide (an agent against fungal infestation, such as tree cancer ).

Lime water is the (almost) saturated solution of calcium hydroxide and serves as a clear liquid for the detection of carbon dioxide through the formation of calcium carbonate, which precipitates and makes the solution cloudy.

Suspensions in water are:

Calcium hydroxide is used as an intermediate product in the production of chlorinated lime and caustic soda from soda .

Burnt (unslaked) lime ( calcium oxide , quicklime) and slaked lime are irritating, contact with the eyes can cause serious eye damage. An aqueous calcium hydroxide solution is alkaline and slightly corrosive. Unslaked lime can cause fires when exposed to water due to the generation of heat.

The exothermic reaction of the slaked lime was considered one of the greatest everyday puzzles from antiquity to the early modern period and found a wide variety of explanations: While the church father Augustine of Hippo (354-430) in his " God's state " (21, 4) the phenomenon as looks at a kind of proof of God , the natural philosophers tried to interpret the phenomenon according to their respective ideas. Prominent examples are:

Seneca the Younger and the Stoa

According to the Stoic cosmology , the Roman philosopher Seneca the Younger († 65 AD) interpreted the lime slaughtering according to the four-element theory of Aristotle . The calcium is to him after firing a "fiery stone", which the heat of that makes him penetrating water.

In the second book of his “Ten Books on Architecture”, written around 30 BC, the ancient master builder Vitruvius formulated a building material science corresponding to the understanding of his time . There he tries in the 2nd and 5th sections to give a conclusive explanation of lime slaking. To this end, he combines the Greek atomism of Democritus and Epicurus with the geometric matter models of Pythagoras to create a completely separate theory of matter: For Vitruvius, the world consists of both " atoms " and vacuum (according to Democritus / Epicurus) and four elements, which however (according to Pythagoras) are geometric solids. Therefore, for him the “atoms” are identical with the Pythagorean bodies and move in empty space. When lime is burned, the "water and air atoms" leave the limestone, which is thought of as a lattice structure made of Pythagorean bodies , so that "holes" are created. Vitruvius explains the weight loss while burning. “Fire atoms”, on the other hand, are stored. When extinguishing, "water atoms" penetrate through the "holes" in the lime lump and the stored "fire" escapes. Since the material itself remains unchanged, the sand adheres to the mortar solely through the pores created in this way. While this explanation was sufficient for pure construction practice, the incompatibility of the systems combined by Vitruvius - atomistics does not recognize any geometrically different, modular "atomic bodies" - especially the architectural theorists of the Renaissance, who referred to him, such as Cesare Cesariano and Daniele Barbaro , posed additional puzzles .

In the 16th century, two of the greatest polymaths of their time, Julius Caesar Scaliger and Gerolamo Cardano , waged a feud over the exact nature of the world over several years and book publications. While Gerolamo Cardano viewed matter as an infinite continuum, which only varied in its “density” from place to place, Scaliger took the view that the “ vacuum ” was the determining factor for the cosmos and the cause of all movement. In his main work, De subtilitate ad Cardanum (1557), directed against the adversary , Scaliger introduces this understanding of matter ( Exercitatio, 5,8-9 ) using nothing other than the "riddle of the slaked lime": Since the lump of lime absorbs water when it is slaked, its pores can only contain “vacuum”, since “air” cannot escape upwards in front of it, as it would immediately meet other “air” and would be blocked.