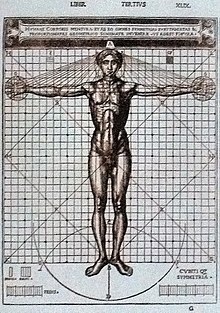 Cesare Cesariano (* around 1477 in Milan ; † March 30, 1543 ibid) was an Italian painter, fresco artist, art writer, military engineer and architect. In 1521 he translated Vitruvius into Italian, added a comment to the book and provided it with woodcuts.

After studying architecture with Bramante , Cesariano left Milan at the age of 16 and then stayed in several northern Italian cities. From 1496 he lived in Reggio nell'Emilia for a long time and is therefore occasionally mentioned in literature as Cesare da Reggio . During this time he worked as a fresco painter . In 1507 he went to Rome, where he made contact with Perugino , Pinturicchio and Luca Signorelli .

Between 1513 and 1514 he came back to Milan and worked there for Ludovico Sforza . His design drawings for the extension of the Church of Santa Maria dei miracoli presso San Celso have been preserved and are kept in the Biblioteca Ambrosiana in Milan. Alongside Leonardo da Vinci and Filarete, he was involved in the expansion of Castello Sforzesco as a modern fortress.

Cesariano was also a member of the Fabbrica del Duomo , which organized and carried out the construction of the Milan Cathedral. 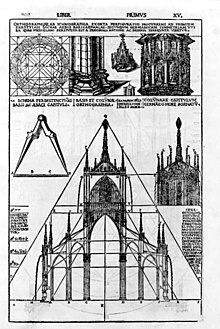 Engraving of the Milan Cathedral by C. Cesariano, from: Vitruvio, De architettura. 1521

While working at the Milan Cathedral, he translated the libri decem of Vitruvius into Italian, commented on the text and created a series of woodcuts to illustrate the text, which was not illustrated in its original Latin version. Cesariano's illustrations were based on previous illustrated editions. The book was printed in Como in 1521. Cesariano's translation only goes up to the 6th chapter of the 9th book because he stopped work after a dispute with his publishers. The translation was completed by Benedetto Giovio da Comasco and Bono Mauro da Bergamo. The book was printed in an edition of 1,300 copies, an astonishingly high number for the time. Most of the cuts are apparently from Cesariano's hand, the Folio X6r cut is signed with his monogram and dated 1516.

The book also includes three woodcuts from the Milan Cathedral. It is probably the first exact drawings of Gothic architecture in a printed book.