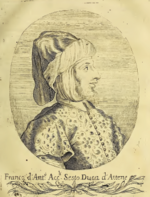 After the death of Duke Nerios II in 1451, power was taken over by his widow Clara Giorgio . She immediately married her lover, Bartolome Contarini , who had his first wife murdered for it. This caused outrage among the people of Athens, followed by a complaint to the Ottoman sultan. In 1454 he ordered the deposition of the duchess and installed Franco as the new duke. He imprisoned Clara Giorgio in Megara and had her killed a little later, according to the historian Laonikos Chalkokondyles . Contarini used this to file a lawsuit with Sultan Mehmed II , who now ordered the destruction of the Duchy of Athens.

Franco and his subjects holed up on the Acropolis , where they held out until June 1458. Mehmed II entered Athens in August and allowed Franco to retire to Thebes as his vassal . The duchy thus ceased to exist after 254 years.

In 1460 Mehmed was informed by the Janissaries of a conspiracy that Franco intended to reinstate in Athens. Franco was called to Morea by Zaganos Pasha , one of the sultan's governors , where he entertained him, but also told him at the end of a long night that his last hour had come. Franco's last wish to be killed in his own tent was granted.

He was married to Maria Asanina, with whom he had two sons and a daughter. The sons were trained to be Janissaries, the daughter was given to the harem.