Landscape with the fall of Icarus

The oil painting Landscape with the Fall of Icarus shows a scene from the Metamorphoses of Ovid in the style of the Dutch Renaissance . The best-known version is in the Royal Museums of Fine Arts in Brussels and measures around 73.5 centimeters in height and 112 centimeters in width. For a long time it was assumed that it came from the Flemish painter Pieter Bruegel the Elder . While his authorship of the composition is considered to be certain, it is doubtful whether he painted the specific version. It may be an early copy of an original by Bruegel.

A slightly different version of the painting is in the Brussels Museum Van Buuren . In this case, too, the possibility that it was made by Bruegel was discussed. However, it is now dated to a period after the painter's death.

Version in the Royal Museums of Fine Arts 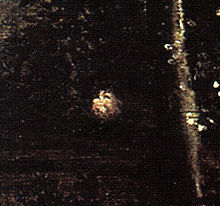 Corpse in the woods

The main character is a farmer turning the clod , a shepherd is standing behind him, and a fisherman is sitting at the lower right of the picture. The view opens onto a bay that extends to the horizon with the sun disk on the horizon. Ships are cruising by the sea, and a white rocky mountain rises in the upper right corner. Diagonally above the plowing farmer lies a fortified rock island (apparently an allusion to the labyrinth from the myth ) and behind it a port city. In the lower left foreground you can see a wallet with a sword in it, next to it is a full sack of grain. Behind the horse, in the bushes, a face can be seen in penumbra, a dead man who is ignored by the plowing farmer, as is the Icarus falling in the background. The crashed Icarus is only small, to a certain extent only recognizable as a picture detail on the edge in the lower right half of the picture above the angler.

The shepherd is roughly in the center of the picture. Its upturned face lies at the intersection of the main and secondary diagonals. The viewer's point of view is on a hill. The farmer is shown diagonally above, the shepherd a little more from the side and the sailing ship above it from the front. By shifting the angle, the painter reinforces the impression of a great distance. The colors yellow, green and brown dominate, but the farmer's red shirt is striking.

Icarus (. Greek Ikaros , lat. Icarus ) is from the Greek mythology known: his father Daedalus (Greek. Daedalus , lat. Daedalus ) was constructed wings with which he and his son fled from captivity in Crete. But when Icarus got too close to the sun in high spirits, the wax that held the feathers together melted and he fell to his death. The poet Ovid describes this in his Metamorphoses (VIII, 183-235) and the Ars amatoria (II, 21-96).

Before his exile to Crete , Daedalus threw his twelve-year-old pupil Perdix from the Acropolis out of displeasure , because he had invented saws and compasses despite his youth. Athene caught the boy, however, and turned him into a partridge , which flies close to the ground and builds its nests in hedges, because it "fears the heights, remembering the former fall". In the painting, the bird is sitting on a branch to the left of the angler. In the myth he flies to the funeral of Icarus. 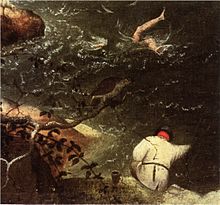 Warship with the fall of Icarus

It is significant that the painter only depicts the crashed Icarus in a marginal way: at the bottom right you can see him falling into the water, with his bare, kicking legs he makes a rather ridiculous figure. Some flying feathers can still be seen above him. Daedalus, one of the main characters, is even missing in the picture. On the other hand, the painting gives meaning to secondary characters such as farmers, shepherds and fishermen, whom Ovid also mentions:

"Some who fished with a swaying fishing rod, some shepherds, who leaned on their staff, some farmers who leaned on the plow, saw the two of them, marveled and thought they were gods because they could cross the high air."

However, the fisherman sits down by the water, the shepherd is placed in the middle, the farmer works his field and what they all have in common is that they are not interested in the fall of the Icarus. The sword in the purse and the sack of grain in the foreground mean the Flemish proverbs: "Money and sword need good hands" and "What is sown on rocks does not grow". They are allusions to the uselessness of Icarus' actions. The aphorism about the half-hidden corpse in the undergrowth is: "No plow stops because of a dying person". Farmer, shepherd and fisherman stoically obey the laws of nature and the cosmos . Even the partridge Perdix , who is happy about Icarus' death in the myth, ignores the victim and the ship (not mentioned in Ovid) leaves the scene of the accident with flared sails.

Bruegel put the legend of Icarus in his own time, as the landscape and the Mediterranean carracks typical of the 16th century speak for . These ships were then built in Dutch shipyards and the painter records them with great accuracy.

Contrary to the legend in which Icarus came too close to the sun, in this picture he crashes at almost the opposite point, whereas the sun either rises or sets. The contemporary Abraham Ortelius remarked in his book of friends : “Our Bruegel paints many things that cannot be painted at all. [...] In his works there is often more about thoughts than about painting. "

According to Jacques van Lennep , the following interpretation is possible: The farmer in the foreground would be an allusion to alchemical art. Alchemists compared their craft to agriculture and believed metals to be organisms that can grow and multiply. The shepherd leaning on the staff represents the god Hermes , who in his youth with his brother Apollo looked after the flocks of Admetus . The ship is supposed to allude to a compost bin and the sea to mercury . This is because a long and dangerous procedure is necessary before mercury forms a chemical compound and this is compared with the dangers of a ship voyage. The rising sun can also mean the renewal of the world through alchemy, so Icarus would be a failed alchemist.

In the drawing of the warship with the fall of Icarus , which is widely used as a copper engraving , Bruegel apparently adheres more closely to the subject: the sun is high in the sky and the father flies beneath the falling son. Nevertheless, the artist is much more interested in the faithfully depicted ship.

The damaged and often painted over work was purchased in 1912 from a London antique dealer for the royal collections in Belgium . Signature , date and historical documents are missing.

Bruegel's trivialization of the Icarus fall was processed literarily in the Low German-High German educational novel Heine Steenhagen wöll ju dat wiesen! The story of an ambitious man (1925) by Friedrich Ernst Peters and in WH Auden's poem Musée des Beaux Arts from 1940. In the story Ikaros by the Polish writer Jaroslaw Iwaszkiewicz , the painting serves as an allegory for the arrest of a boy in the street, ignored by passers-by during the German occupation of Warsaw in World War II .

Version in the Van Buuren Museum

A second version, showing Daedalus high in the sky in the left half of the picture, appeared in 1935. According to the Van Buuren Museum in Belgium, it comes from the circle of Pieter Bruegel the Elder and was created around 1590–1595, at least two decades after the death of Pieter Bruegel the Elder. At 63 centimeters high and 90 centimeters wide, it is smaller than the version in the Royal Museums. It was also painted in oil colors as image carrier served wood.

Commons : Landscape with the fall of Icarus  - collection of images, videos and audio files

Painting by Pieter Bruegel the Elder

Old peasant woman  | The Adoration of the Magi (Bruegel, 1564)  | The Adoration of the Magi (Bruegel, around 1556)  | The Adoration of the Magi in the Snow  | The country wedding  | The peasant dance  | The conversion of Paul  | The Bethlehemite Child Murder  | The fall of the blind  | Christ and the Apostles at the Sea of ​​Galilee  | Christ and the adulteress  | The three soldiers  | The gloomy day  | The magpie on the gallows  | River landscape with a sower  | The yawn (?)  | Great Tower of Babel  | The port of Naples  | The return of the flock  | The haymaking  | The wedding dance  | The hunters in the snow  | The battle between carnival and fasting  | The children's games  | Little Tower of Babel  | The grain harvest  | Christ Carrying the Cross  | The cripples  | Landscape with the Flight into Egypt  | Landscape with the fall of Icarus (?)  | Seascape with a burning city (?)  | The misanthrope  | The nest ejector  | The Dutch proverbs  | The sermon of John the Baptist  | The land of milk and honey  | Saul's suicide  | The fall of the rebelling angels  | Death of the virgin  | The great Grete  | The triumph of death  | The Bethlehem Census  | The wine for the feast of St. Martin  | Winter landscape with ice skaters and bird trap  | Two monkeys  | Twelve Proverbs (?)