The fall of the blind

The Fall of the Blind is a painting by the Dutch painter Pieter Bruegel the Elder . The 154 cm × 86 cm large tempera painting on canvas was created in 1568. It can be viewed today in the Museo di Capodimonte in Naples . Several copies of this picture are known, a 118 cm × 168 cm oil painting on wood is in the Louvre in Paris . 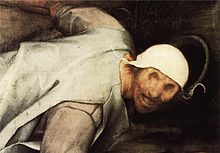 The group forms a diagonal from top left to bottom right, separated from the viewer by a sudden break (lower left corner). Directly behind the first blind man there is a body of water that cuts off the group from the village houses on the other bank - in the upper right half of the picture there is a church. Bruegel depicts falling movements in different phases on the sloping terrain. The fifth figure from the left, who is about to fall like a companion into the pool, is the only one to turn to the viewer. The depiction is so precise that the cause of blindness can be determined in three of them: the third from the left suffers from a leukoma , the fourth from black star and the fifth's eyes have been gouged out .

In contrast to his dance and wedding pictures, Bruegel hardly uses color contrasts and a very reduced palette of brown and blue-gray tones.

The painting is based on the parable of the fall of the blind from the Bible . In the 15th chapter of the Gospel of Matthew Jesus says about the Pharisees : “Leave them alone, they are blind guides for the blind. But if one blind man leads the other, they both fall into the pit. " ( Mt 15,14  EU )

This motif was picked up by different painters in the Renaissance period and implemented in different ways. Bruegel relates it entirely to the time in which he lived and merely suggests the religious context.

In the Renaissance , the blind were usually depicted with their eyes closed. Bruegel proceeded differently, he looked closely at his contemporaries. There were many blind people in his world, not all of them were born from birth, rather poor hygiene and diseases played their part. In a medical work from 1585 alone 113 eye diseases are mentioned; Often there was no cure for those affected. And because the blind were dependent on alms , that is, they were felt to be lying on the pockets of others, many of them belonged to the beggars who lived ailing, ragged and neglected on the streets. Bruegel depicts his blind people accordingly. According to the Calvinist doctrine, blindness was a punishment: Those who were left in misery by God deserved it. The diagonally downward path of the group of people indicates that the rest of the group is about to fall. A white Madonna lily hangs over the water of the pool on the edge of which the first blind man fell . Lilies were considered a sign of purity and redemption; Bruegel does not say whether this will be granted to those who fall.

The importance of the church in the background is controversial among art historians. There are three different approaches that none of them could claim. Some believe that the church has no meaning, as Bruegel often integrated such into his pictures. Others explain, with regard to the religious background, that the withered little tree in front of her (almost just a dry branch) signals that she, being led by Pharisees , has become useless. A third group, on the other hand, sees a moral clue in the special position that the church occupies in the picture: It is not by chance that it is placed between the two blind men who have already fallen and the group of the last four: This indicates that the first two lost, but the other four can still be saved.

The building can be identified as the village church of St. Anna near Brussels .

Commons : The Fall of the Blind  - Collection of pictures, videos and audio files

Painting by Pieter Bruegel the Elder

Old peasant woman  | The Adoration of the Magi (Bruegel, 1564)  | The Adoration of the Magi (Bruegel, around 1556)  | The Adoration of the Magi in the Snow  | The country wedding  | The peasant dance  | The conversion of Paul  | The Bethlehemite Child Murder  | The fall of the blind  | Christ and the Apostles at the Sea of ​​Galilee  | Christ and the adulteress  | The three soldiers  | The gloomy day  | The magpie on the gallows  | River landscape with a sower  | The yawn (?)  | Great Tower of Babel  | The port of Naples  | The return of the flock  | The haymaking  | The wedding dance  | The hunters in the snow  | The battle between carnival and fasting  | The children's games  | Little Tower of Babel  | The grain harvest  | Christ Carrying the Cross  | The cripples  | Landscape with the Flight into Egypt  | Landscape with the fall of Icarus (?)  | Seascape with a burning city (?)  | The misanthrope  | The nest ejector  | The Dutch proverbs  | The sermon of John the Baptist  | The land of milk and honey  | Saul's suicide  | The fall of the rebelling angels  | Death of the virgin  | The great Grete  | The triumph of death  | The Bethlehem Census  | The wine for the feast of St. Martin  | Winter landscape with ice skaters and bird trap  | Two monkeys  | Twelve Proverbs (?)