Outremer is a redirect to this article. For the French expression, see French overseas territories .

The Crusader States around 1135.

Asia Minor and the Crusader States around 1140 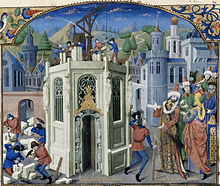 Reconstruction of the temple in Jerusalem. William of Tire : Histoire d'Outremer

The crusader states in the strict sense are the four states established as a result of the First Crusade in Palestine and Syria :

The constant wars between the Islamic powers made it possible for the crusaders to occupy the coastal land on the Levant and keep it open for supplies. The country was also referred to as Outremer (from old French outre mer , oltre mer , beyond the sea 'or' overseas'). This designation is more appropriate, as after a short time only a few of the immigrant Western Europeans were crusaders in the real sense. The Western Europeans, referred to as Franks in contemporary sources , who settled in the region after the First Crusade , represented a privileged minority, while the majority of the population comprised non-Catholic Christians, Jews and Muslims. Although Syriac , Armenian and Greek were common in the respective parts of the region, Arabic was used as the lingua franca of the local population . The “Frankish” settlers spoke mostly French - in the county of Tripoli mainly Occitan .

In Old French, the expression outremer was used on the one hand in the original meaning "beyond the sea, overseas" without any connection to a specific sea or country. In individual cases, for example, France could be meant from the point of view of England, but also the Holy Land (Terre Sainte) in general and the Crusader states in particular. Today's research literature is based on this latter use.

In addition, the term Syria , which originated in Roman times, was also used in the Middle Ages for the four crusader states . 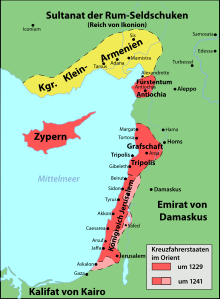 The county of Edessa was founded in 1098 as the first crusader state. Under Joscelin II († 1159) it fell in 1144 against the Islamic lord of Mosul and Aleppo .

The principality of Antioch, also established in 1098, was expanded by conquests against the Muslims and Byzantium under its first Norman rulers, Bohemond of Taranto († 1111) and his nephew Tankred of Tiberias († 1112) . They left behind a stable state, for which, however, Raimund von Poitiers had to pay homage to the Byzantine emperor in 1137. In 1268 Antioch , now economically impoverished, succumbed to a Mamluk army of the Sultan Baibars of Egypt.

Not much later (1289), Tripoli fell, ruled by the princes Antioch since Bohemond IV. it was established in 1109 as the last of the Crusader states and was given to Bertrand of St. Gilles as the Vasallite County of the Kingdom of Jerusalem.

The Christians regained Acre in 1191 under the leadership of Richard the Lionheart , who in 1192 contractually agreed with Saladin on Christian rule in the coast from Tire to Jaffa . The German crusade recaptured the coastal strip from Tire to Tripoli in 1197.

The crusade of Frederick II , who crowned himself King of Jerusalem in 1229, brought Jerusalem and other areas back to the Crusaders through diplomatic channels. Theobald of Champagne and Richard of Cornwall were able to win back Ascalon and the lands west of the Jordan in the barons' crusade in 1239–1241 . Jerusalem was finally lost in 1244. Acre, the center of the rest of the kingdom, was weakened by internal fighting and fell after the last medieval siege in 1291. The rest of Palestine - with the exception of the city of Gibelet ( Byblos ) (conquered 1298) and the island fortress of Ruad off the Syrian coast ( conquest 1302 ) - evacuated in the same year (escape to Cyprus).

The Johanniter expelled from Palestine / Syria to Cyprus conquered Rhodes from 1306 , which they ruled until the conquest by the Ottomans in 1522.

Society in the Crusader States

Various Christian and Islamic sources provide insight into everyday life and society in the crusader states . Particularly noteworthy are Wilhelm von Tire , the archbishop of Tire in the Kingdom of Jerusalem and chancellor under King Baldwin IV , as well as Fulcher of Chartres , a clergyman and participant in the first crusade, on the Christian side. On the Islamic side, Usama ibn Munqidh , who, as a diplomat, was able to gain extensive insight into the internal conditions of the crusader states, and Ibn Jubair , who wrote detailed travel reports on his pilgrimages and did not omit the Levant with the crusader states, should be emphasized.

Regarding social stratification in the crusader states, it should be noted that the ruling stratum of the Latin-Christian "Franks" was very thin during the entire existence of their rule in the Levant and concentrated on the cities, especially the coastal cities, and fortresses. Frankish settlers also settled in the countryside, but they seem to have preferred at least the areas in which mainly Eastern Christians and no Muslims settled. These two groups, with different regional distributions, formed the majority of the population in the Crusader rule, especially in the countryside, and a small minority of Jews also lived in these areas.

Despite the various religious, ethnic and cultural differences between Latin-Christian crusaders and the native Muslims and Eastern Christians, a kind of modus vivendi developed under the rule of the Franks , a practical cooperation between the various groups, especially in the economic field. However, this must not be confused with tolerance and integration in the modern sense. The Franks, for example, tolerated the Muslim population and granted them some rights with simultaneous taxation, since there were simply not enough Christian settlers (from Europe) to keep the economy going. Likewise, the Franks cooperated with the Muslims, especially in the area of ​​trade, who led caravans with trade goods to the Christian area and whose goods were subject to customs duties by the Franks, for this purpose even Christian officials who were able to speak Arabic were used. On the other hand, the Muslims also cooperated with their new masters, especially since not much changed for the farmers in the country, they continued to pay taxes and duties, only now to new masters, otherwise they were largely left alone.

In the late phase of Outremer in particular, the crusader states developed into the Levant's leading trading center for most products . This was achieved on the one hand by building a complex transport and communication network. On the other hand, the financing and constant further development of the extremely profitable industrial production of sugar cane, silk, cotton and glassware in the crusader states was decisive for this. As a result of this development, Frankish cities such as Antioch , Tripoli , Beirut , Tire and, in particular, Acre achieved remarkable prosperity in the 13th century .

Crusader states on the verge of the crusades

The kingdom of Cyprus , which was founded during the Third Crusade , is also counted among the crusader states . Richard the Lionheart conquered the island on his way to the Holy Land , which later became the dominion of the dethroned kings of Jerusalem until 1489.

Another Christian state on the verge of the Crusades was the Kingdom of Lesser Armenia , which had been established a few years earlier under local rulers fleeing the Seljuks and which was able to last for around 300 years.

In the Fourth Crusade , the Byzantine Empire was conquered by the Crusaders (1204), with the creation of four more states:

The Venetians also created the Duchy of Archipelagos in the Aegean Sea as a result of the Fourth Crusade .

Thessaloniki and the Latin Empire were recaptured by the Byzantines by 1261. Successors to the Crusaders ruled Athens, the Peloponnese and Morea until the middle of the 15th century .

In 1271 Charles of Anjou , King of Sicily, conquered the north of the despotate Epirus and founded the Kingdom of Albania ( Regnum Albaniae ) in 1272 , which existed until 1368. Another crusader state under the influence of the Kingdom of Naples was the Palatinate Counties of Kefalonia and Zakynthos .

In 1319 the Catalan Company established the Duchy of Neopatria in Central Greece, which, together with the Duchy of Athens, was part of the Aragonese Crown .

The crusader states minted their own coins based on the European and Byzantine models, but they also have oriental influences. For example, Arabic gold dinars with faulty script were presumably minted since the 1140s . In 1251, Pope Innocent IV banned these coins, and from then on the coins were only allowed to have Christian content, even if Arabic script was still allowed. The coins of the crusader states form a separate collection area in numismatics .

Commons : Coins of the Crusader States  - Collection of images, videos and audio files