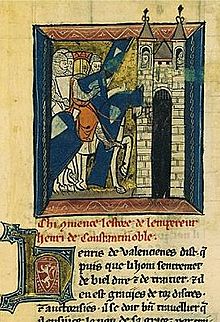 With his chronicle Histoire de la conquête de Constantinople ( History of the Conquest of Constantinople ), written in 1207-1213, he created the oldest surviving historiographic work in French prose, with which he broke into a domain that was previously reserved for Latin .

Gottfried came from the Champagne noble family Villehardouin . Around 1190 he became Marshal of the County of Champagne and perhaps 1190-92 accompanied his Count Heinrich II on the Third Crusade . When his incomplete success should be made up for by another crusade, he took in 1199 during a tournament that Heinrich's successor Theobald III. aligned the cross and subsequently acted as one of the main organizers of the Fourth Crusade . So he belonged to the embassy of Theobald, which negotiated in 1201 with the Republic of Venice , which should make the ships available for the crossing to Palestine . He also played an important role in the election of Boniface de Montferrat as the new leader of the crusade after Theobald died.

Although he does not mention it in his chronicle, he probably supported the diversion of the crusade to Zara and then to Constantinople, which the Venetians wanted . There he negotiated with the Byzantine emperor Isaac II , who should appoint Alexios IV as co-emperor in the spirit of the Venetians .

When Alexios came to the throne, he could not keep his promise to thank the Crusaders with troops and money, Gottfried was one of the leaders in the conquest and sack of Constantinople in 1204 , which began with the assassination of Alexios and the establishment of a short-lived “Latin “The empire under Baldwin I ended. For his services, he was appointed Marshal of the Latin Empire ("maréchal de Romanie") by Baldwin. After the Battle of Adrianople in 1205, when Baldwin was captured, he led the retreat.

In 1207 he was enfeoffed by Boniface of Montferrat, who had meanwhile risen to King of Thessaloniki , rule over Mosynopolis in Thrace and began to write his chronicle. As expected, he is reluctant to provide information that would have made the Crusaders appear negative. The Greek historian Niketas Choniates , who describes the same events from a Byzantine point of view, is often the appropriate addition to his account.

Gottfried died shortly after the end of the Chronicle and without having returned to France, probably in 1213, the year in which his son Erard is first attested as lord of Villehardouin.

His nephew Gottfried I von Villehardouin became Prince of Achaia in Morea in 1209 (that is the medieval name of the Peloponnese ).