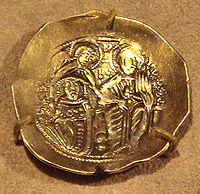 Michael VIII Dukas Komnenos Palaiologos. ( Medium Greek Μιχαὴλ Η'Δούκας Κομνηνός Παλαιολόγος * 1224 / 1225 in Asia Minor ; †  11. December 1282 in Thrace ) was from 1259 until his death in 1282 Byzantine emperor . After the general Alexios Strategopulos took Constantinople on the night of July 25, 1261 , he eliminated the Latin Empire established as a result of the Fourth Crusade and restored the Byzantine Empire .

Michael VIII comes from the Byzantine noble family of palaeologists , whose first tangible representative is Nikephoros Palaiologos, the 1078 general of the emperor Nikephoros III. Botaneiates was when Dux (governor) of the theme Mesopotamia acted and fell on October 18, 1081 at Durazzo in the fight against the Normans under Robert Guiscard , Duke of Apulia and Calabria (1059-1085). Since then, the family has been at the forefront of the Byzantine military aristocracy and was related to the imperial dynasties of the Dukai and the Komnenen at an early age .

Michael VIII's mother was a cousin of his father, Theodora Komnene Palaiologina, whom he married in 1216. She was the daughter of Alexios Komnenos Palaiologos, who received the title of Despot and Heir to the Throne of the Byzantine Empire in 1199 , but died in 1201/1204, and Irene Angelina, the eldest daughter of Alexios III. Angelos , who ruled the Byzantine Empire from 1195 to 1203 as emperor and died in captivity in Nikaia after 1211.

Michael followed the tradition of his family and embarked on a military career where he went through a lightning career due to his origins. As early as 1246 he became governor of Melnik and Serrhai, 1252 grand constable and 1258 despot . Through his marriage to Theodora Dukaina Komnene Batatzaina (* 1240; † 1303), a great niece of Emperor John III. , in 1253 he was henceforth family connected to the ruling dynasty of the Laskarids .

After the death of Theodor II , he took over the reign of his underage son Johannes . On January 1, 1259, he was proclaimed and crowned co-emperor through a referendum. He increasingly pushed his protégé Johannes into the background. This brought him into conflict with Patriarch Arsenios Autoreianos , whom he had deposed, which led to the arsenite dispute that divided the Byzantine Church until 1310.

At first Michael ruled in Nicaia ( Nicaea ) until he moved his seat of government to the former capital of the Byzantine Empire after the liberation of Constantinople from the Latin emperor Baldwin II . Johannes, who was still in Nikaia, was blinded and banished to an island in the Sea of ​​Marmara .

In the first years of his reign he achieved many military victories, including 1259 against a western alliance near Pelagonia in Macedonia, 1262 against the Bulgarians, 1264 in Epiros. In the shape of Charles I of Anjou , who defeated the Hohenstaufen king Manfred of Sicily in 1266 and took over his kingdom in southern Italy and Sicily , the empire was faced with a new dangerous enemy. In 1267 Charles I allied himself with the expelled Latin Emperor Baldwin and the Prince of Achaia Wilhelm II von Villehardouin in preparation for a campaign with the goal of Constantinople. In order to thwart these plans to reestablish the Latin Empire, Michael VIII entered into negotiations with the papacy in order to achieve a union of the Orthodox and Catholic Churches and thus to get the Pope to stop any new crusade to Constantinople. Despite strong resistance from the ranks of the Church, the aristocracy and the people, Michael VIII forced the Union. At the Second Council of Lyon in 1274, he solemnly proclaimed the union of the two churches, against the opposition of many Byzantine Greeks. However, this union did not bring the hoped-for success, since the subsequent popes doubted the serious will of the Byzantines to join the union; Charles I of Anjou prepared his attack undisturbed, the new French Pope Martin IV gave consent to a crusade in 1281 and excommunicated Michael. The emperor then came into contact with King Peter III. from Aragon, an old enemy of Charles I, as well as with opposition groups in Sicily. Byzantine (secret) diplomacy and bribery were one of the causes of an uprising in Sicily in March 1282 against Charles I, who had to give up his crusade plans. In August 1282, Peter III landed. in Sicily and expelled the troops of Angevin.

Towards the end of his reign, Michael also had to devote himself to relations with the Trapezunt empire under John II . Michael demanded that John should give up the title of Roman emperor he had carried over from his predecessors . The reason for this was that Michael still regarded the area ruled by Trebizond, which had previously been Byzantine, as part of the Byzantine Empire and it was only reserved for the ruling regent in Constantinople to hold the imperial title. At first Johannes did not give in to Michael's request. In order to put the relations between her two realms on a new basis, Michael offered Johannes the hand of his third daughter Eudokia Palaiologina . They married in Constantinople in 1282. On his return from the wedding celebration, John gave up the title of Roman Emperor .

After Michael's death on December 11, 1282, he was succeeded by his son Andronikos II. Palaiologos on the Byzantine imperial throne.

Michael Palaiologos succeeded in raising a dynasty to the throne with the Palaiologoi, which ruled Constantinople until 1453. He had three sons and six daughters (two illegitimate).