The topic ( ancient Greek θέμα , the etymology of the word is controversial) was an administrative unit in the Byzantine Empire as the successor to the Roman Provincia . The first themes emerged around the middle of the 7th century . These were military districts, whose commanders later also performed civil-administrative tasks. The likely meaning is "allocation" or "installation room", the original meaning of the word was probably simply "army"; Since the early 7th century it has designated the army group of a magister militum (army master) of the late Roman army . In some respects, the exarchate was a preliminary stage to the topics .

Under the pressure of the Arab invasion from the 630s onwards, new military districts ( Armeniakon , Thrakesion, Opsikion and Anatolikon) emerged in Asia Minor around the middle of the 7th century . In the opinion of most historians, this is not the result of the efforts of only one emperor, but rather this development represented a long process.

This reorganization of the administration became necessary due to the massive loss of territory in the 7th century. In the decades that followed, Ostrom fought for sheer existence. Only relatively few, scattered sources report on this time; Nevertheless, the thematic organization seems to have made a significant contribution to the stabilization of the empire, although other factors, such as later internal Arab disputes, also played a role.

The civil eparchiai or provinces, however, survived in parallel until at least the 8th century. Later, the management of the subject was also transferred to the Byzantine areas in Europe threatened by Slavs and Bulgarians and the recaptured areas in the east. Although the military administration was strictly separated from the civil administration at first, as was customary in late antiquity , the military governors also took over this function by 840 at the latest, now supported by subordinate protonotarioi , whose importance increased more and more in the course of the 9th century . Even now, however, as the Cletorologion of Philotheos indicates (899), there was a parallel civil administration, albeit under the control of the corresponding strategos ( στρατηγός , "General").

The big themes were eventually broken down into smaller units (especially in connection with the Byzantine expansion from the mid-9th century). Last but not least, this should prevent the danger that ambitious generals could use the issues as a springboard for usurpation. In the 11th century the thematic order, which also included the settlement of soldier farmers on the border (see also Akriten ), collapsed due to the economic and military catastrophes of the Byzantine Empire. Emperor Basil II resolved several issues and instead delegated the defense to mercenary units , which were under his direct control.

The number of themes varied between four (at the time of their creation) and around fifty (during the Byzantine expansion at the end of the 10th and beginning of the 11th centuries).

Not least because of the extremely inadequate sources regarding the situation in the Byzantine East in the 7th century, numerous individual questions about the constitution of the subject are extremely controversial. This concerns above all, but not exclusively, the dating and the modalities of the introduction of the thematic constitution. For a long time it was considered a reform of the emperor Herakleios . According to Georg Ostrogorsky , Herakleios created it in the context of the Persian Wars by allocating land to the troops and setting up military provinces in which recruitment was preferred. He referred to a statement in the (albeit not contemporary) Theophanes manuscript, according to which Emperor Herakleios had gone into the areas of the subjects in 622 . Franz Dölger , Wilhelm Enßlin and Charles Diehl joined his interpretation .

However, no agreement was reached, for this reasoning was soon contradicted by several scholars. For example, Norman Baynes pointed out that the sources Ostrogorsky cited as evidence are not contemporary and therefore could hardly be used as evidence of his thesis. It is also difficult to imagine that Herakleios' troops settled in Asia Minor, as Ostrogorsky suggested, while at the same time up to 626 Persian troops were still operating in this region. The first explicit, secure mention of the topics did not take place before the 60s of the 7th century. Agostino Pertusi also contradicted Ostrogorsky and, together with other researchers, pleaded for the emergence of Asia Minor themes to be in the second half of the 7th century. Some researchers again assumed a gradual emergence in the late 6th or 7th century from the late Roman mobile army and the limitanei . Paul Lemerle, Pertusi, Karayannopulos and others, however, rejected any connection between the military country and the first issues, since military goods were only attested much later.

In modern research, the introduction of the thematic system is hardly ascribed to Herakleios. The majority of historians today assume that the first topics arose after the beginning of the Arab invasion through the regrouping of the old Eastern Roman border troop units in the interior of Asia Minor, and initially not as a permanent institution, as at first it was hoped that the old borders would be regained . A particularly important argument is the reference to the names of the first four topics: the troops that had served under the magister militum per Orientem in Syria and Mesopotamia until the attack by the Arabs evidently drew on the topic of Anatolicon (Greek anatolé = Latin Oriens ), while the soldiers of the magister militum per Armeniam defended the Armeniakon theme . The same applies - if one follows this hypothesis - also to the troops that had previously been under the magister militum per Thracias ; they were initially used in the unsuccessful defensive battles against the Arabs in Egypt in 640 and then moved to Asia Minor in the middle of the 7th century, where they now secured the theme of Thrakesion . The units of the guard ( obsequium ), which were previously subordinate to the magister militum praesentalis , were in turn supposed to defend the subject of opsikion . At the same time, the Roman office of magister militum disappeared in the 660s . If this theory, which is often accepted in recent research, applies, then the development of the topic order was the result of the collapse of the late Roman border defense and the retreat of the defeated armies to Asia Minor around 640, not the result of a targeted reform.

The earliest topics that arose were:

The limits of the first subjects still essentially followed the civil administrative units of late antiquity; the area of ​​an early subject thus spanned several provinces. When these lost their practical relevance, the new topics no longer took account of the old boundaries. The administration of the subjects was subordinate to the military , the governor of a subject was at the same time the commander in chief of the army. His common name was Strategós ("general", the traditional Greek translation of magister militum ), that of the Opsikion Komes (from Latin comes obseqium ), that of Anatolia and Armenia Patrikios (from Latin patricius ). From Johannes I. Tzimiskes onwards, the commanders of the Tagmata and the Border Issues were referred to as Komes . Africa and Italy were exarchies, Cyprus, Crete, and Thessaloniki archonies .

The reorganization gave the strategists a relatively large amount of power, from 668 onwards, therefore, rebellions by strategists are also documented. Therefore, the topics were reduced under the following rulers, Constantine V set up the Tagmata from parts of the troops of the Opsikion , a kind of imperial household troop, which, however, also managed military goods. The themes did not take their final form until the second half of the 8th century, when they finally represented new administrative-geographical units. Only sources from the 10th century report in more detail on the organization of the themes.

The soldiers, including the foreign mercenaries, were assigned land within the themed areas from the 8th century, so that their wages could be significantly reduced. The more recent research emphasizes, however, that the establishment of the topics was not linked to the creation of a soldier farming community. Rather, the state initially provided for the troops, the organization for this was in the hands of the kommerkiarioi . The soldiers of the later military goods (it is problematic that only later sources from the 10th century report of these stratiotika ktemata , so that a slow development in the 7th and 8th centuries cannot be ruled out) finally had to pay for uniforms, equipment, Earning horses and forage from the proceeds of their agriculture.

The topics were divided into 2–18 droungoi , each consisting of 1,000 military equipment. They were under a Drungarch. Several Droungoi formed a Turma under a tower arks. Warren Treadgold estimates the strength of the field army for 773 at a total of 80,000 men. In the 11th century, troops were repeatedly detached from the themed armies and relocated to the Tagmata.

In chapter 18 of the tactics , the organization of a themed army is presented using a 4,000-strong cavalry unit . Instead of mobilizing the entire issue in the event of an enemy attack, it recommends that the strategos only take action against the enemy with the help of a unit formed from 4,000 selected cavalrymen and distribute the remaining soldiers to other units. If this is not enough, the strategos should try to team up with one or two other strategoi and their associations. The list of listed officers includes: 2 turrets , 4 droungarches , 20 comes , 40 hekatontarches , 80 pentecontarches (also called tribune), 400 decarches and 800 pentarchs. 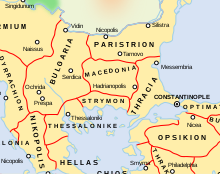 Topics in the Balkans around 1045 ( large version )

The land allocated to the soldiers probably came from the great imperial estates, and fallow land on the great family estates - the late ancient Senate aristocracy had been in a serious crisis since about 600 - may have been used. In the past it was sometimes assumed that the reorganization might have been based on the Persian army reform of Chosrau I , but this ultimately remains speculation. Emperor Maurikios had already subordinated the exarchs to the Praetorian prefecture and thus mixed military and civil administration.

After the Arab attacks on Asia Minor receded, combat operations became rare in many areas and the soldiers gradually became farmers. In some cases, the soldiers had to transfer funds, but overall they received payments without doing much. Constantine IX began to resolve issues, but this contributed to the weakening of the border defense.

After the Battle of Manzikert (1071), the thematic organization began to disintegrate, from around 1100 it seems to have disappeared, after there had already been a further separation between civil and military administration in the 11th century. The emperors now mainly deployed mercenary troops . The term themata also appears in late Byzantine sources, but at that time it only had the role of fiscal administrative units.