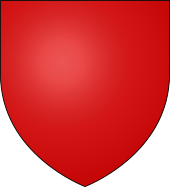 Bohemond VI coat of arms until 1252

Bohemond VI coat of arms from 1252

Bohemond VI. of Antioch , called the Beautiful (* 1237 ; † 1275 ) was Prince of Antioch and as Bohemond III. Count of Tripoli . He was the son of Bohemond V of Antioch and his wife Lucienne de Cacammo-Segni, a niece of Pope Innocent III.

When his father died in January 1252, Bohemond VI was. not older than sixteen and should initially be under the tutelage of his mother. However, he traveled with her to Jaffa that same year , where King Louis IX. stayed from France after the failed sixth crusade and carried out de facto rule in the Kingdom of Jerusalem . From Louis IX. Bohemond received in December 1252 the sword line and the right to include his lily hermelin in his coat of arms. He was also declared of age, after which he was able to take over the government in Antioch from his mother.

In 1254 Bohemond married under the armistice that Louis IX gave him. had mediated, Sibylle of Lesser Armenia , a daughter of King Hethum I , which ended the dispute between the two states that his grandfather Bohemond IV had started. Since Antioch was now de facto ruled by Lesser Armenia, Bohemond withdrew to his second residence, Tripoli.

In 1256 the war of Saint-Sabas began , in the course of which one of his feudal men, the Lord of Gibelet , openly rebelled against the feudal sovereignty of the Count and, with the support of Genoa, fought for relative independence. The conflict could only be ended by Bohemond's son and successor in 1282, who conquered Gibelet and killed the master there.

The armistice with Armenia was soon pushed aside in the face of the war between the Mongols and the Mamluks . The Mongols were defeated in the battle of ʿAin Jālūt in 1260 , after which the Mameluke Sultan Baibars began to threaten Antioch, which (as an Armenian vassal ) had supported the Mongols. With the conquest of Antioch by Baibars in 1268, Bohemond lost the principality, but continued to hold the title of prince of Antioch. Bohemond VI. continued to lose influence and power, northern Syria was also lost, so that his territory was finally limited to the city of Tripoli and its immediate surroundings.

With Sibylle of Lesser Armenia he had four children: