Alexander Jaroslawitsch Newski ( Russian Александр Ярославич Невский listen ? / I , scientific transliteration Aleksandr Jaroslavič Nevskij ; * around 1220 in Pereslavl-Salesski ; † November 14, 1263 in Gorodets ) was a Russian prince of the Rurikid dynasty. He is considered the national hero of Russia and is a saint of the Orthodox Church . He ruled as Prince of Novgorod (from 1236) and Grand Duke of Kiev (from 1249) and Vladimir (from 1252), always paying tribute to the Golden Horde . Nevsky was a military leader when the Teutonic Order's attempts to expand into Russia were stopped in the Battle of Lake Peipus in 1242 .

It is possible that Alexander was first appointed by the Novgorod citizens (see Veche ) as their military leader as early as 1236 . He got his nickname Nevsky after defeating the Swedes in the Battle of the Neva (near today's Saint Petersburg ) in 1240 . Shortly afterwards he had to leave the city after clashes with the boyars . When the Crusaders of the Brothers of the Sword Order, which had recently been united with the Teutonic Order, tried again in 1240 to expand their rule over the Baltic States to Russia , conquered the trading city of Pskov and advanced on Veliky Novgorod , the Novgorodians called Alexander Nevsky back and did him again to the army leader. On April 5, 1242, the decisive battle took place on the ice of the frozen Lake Peipus . The Russian troops, consisting of Alexander's Druzhina , that of his younger brother Andrei and the Novgorod militia , defeated the German and Danish knights and their Estonian auxiliaries. This put the Teutonic Order's invasion plans in Russia on hold for a long time.

In 1246 Newski's father, the Vladimir Grand Duke Yaroslav II , was murdered by poison. As a result, his uncle Svyatoslav III. take the throne, in accordance with the seniority principle . Together with his younger brother Andrei, Alexander Newski set about driving his uncle from the throne. At the court of Batu , the khan of the Golden Horde , the brothers worked to enforce their own succession to the throne. In 1248 they were successful: Batu deposed Svyatoslav and instructed the brothers to jointly rule over the principality of Vladimir. Alexander received the area around Kiev , but made Novgorod the most important center of power, Andrei got the capital Vladimir and its surrounding area. In the period that followed, Alexander turned to Scandinavia . He sent envoys to Norway and in 1251 concluded a peace treaty with the local ruler. With campaigns to Finland, he prevented the Swedes from cutting off access to the Baltic Sea.

Andrei began to forge an alliance of Russian princes to rebel against Mongol rule. The opportunity seemed favorable, as at this point in time conflicts broke out among the Mongols over the designated successor to the Great Khan. Eventually, however, Möngke prevailed around 1250 . Alexander Newski, who had stayed away from Andreis' plans, used this development to lean closely to Batu and to intrigue against his brother at the Khan's court. Batu deposed Andrei and granted Alexander Newski the dignity of Grand Duke. An army was sent against Andrei, whereupon he had to flee to Sweden. Andrei later submitted to his brother, who then obtained permission from the Khan that Andrei was allowed to return to Russia.

The rise of Alexander meant the implementation of a policy that was not aimed at the revolt against the Mongols. This attitude was also welcomed by the Orthodox Church, as Andrei had sought contact with the Pope, while the Mongols left the Orthodox Church unmolested and Alexander rejected attempts by the Pope to contact him. With the installation of Alexander, the Mongols achieved a consolidation of their rule over Russia. This became evident in the late 1250s when the Mongols began to build a tax system with fixed structures. Alexander Nevsky broke the resistance against this project, especially in Novgorod, with sometimes cruel means. At the same time he pushed back the influence of the boyars . In 1257 the Mongolian tax collectors started their work. In order to appease the Mongols in the face of the uprisings, Alexander set out on his third and final journey to the court of the Golden Horde in 1262 . Khan Berke held him there for a long time. The Grand Duke, who was seriously ill, was only allowed to leave in the winter of 1263. On November 14, 1263, Alexander Nevsky died in Gorodets on the Volga and was first buried in Vladimir. 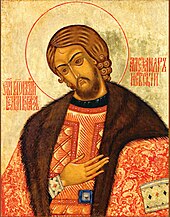 At the end of the 13th century a chronicle of heroes about the life of Alexander Newski was written. In 1547 he was canonized by the Russian Orthodox Church . Peter the Great later had his remains transferred to the main cathedral of the Alexander Nevsky Monastery in Saint Petersburg . After Peter's death , the Alexander Nevsky Order was founded on May 21, 1725 . Abolished after the October Revolution , it was renewed by Josef Stalin in World War II . Alexander Newski's grave is still heavily visited and revered today. He is considered the patron saint of the city.

The Soviet director Sergei Eisenstein filmed the defensive battle of the Russians under the leadership of Alexander Nevsky against the invading army of the Teutonic Knights and the victory in the Battle of Lake Peipus in 1242 in his film Alexander Nevsky . His friend Sergei Prokofiev composed the music for the film, which he later reworked into the cantata Alexander Nevsky .

In the television project “The Name of Russia” on the Rossija 1 channel , Alexander Newski was voted the greatest Russian of all time in an online poll in front of Pyotr Stolypin and third-placed Josef Stalin .