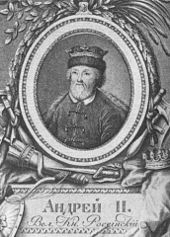 According to the seniority principle , after the death of Yaroslav II in 1246, his younger brother Svyatoslav III. assumed rule. Immediately, Andrei and his brother Alexander Nevsky tried to drive their uncle from the throne. At the court of the great khan Batu they worked to enforce their own succession to the throne. In 1248 they were successful: Batu deposed Svyatoslav and instructed the brothers to jointly rule over the principality of Vladimir. Alexander received the area around Kiev , Andrei the city of Vladimir and its surrounding area.

Andrei II tried in his short reign to forge an alliance against the Mongol rulers. To this end, he contacted the Roman Church through his father-in-law Daniel Romanowitsch of Galicia and gathered allies among the Russian princes. The opportunity for rebellion seemed favorable, as at this point in time conflicts broke out among the Mongols over the designated successor to the great khan. Ultimately, however, Möngkä prevailed. Alexander Newski, who had stayed away from Andreis' plans, took this opportunity to lean closely to Batu and to intrigue against his brother at the court of the great khan. Batu deposed Andrei and granted Alexander Newski the dignity of Grand Duke. An army was sent against Andrei, whereupon he had to flee first to Novgorod and then to Sweden. Andrei later submitted to his brother, whereupon the latter obtained permission from the Khan that Andrei was allowed to return to Russia.