from Wikipedia, the free encyclopedia
Battle on Lake Peipus 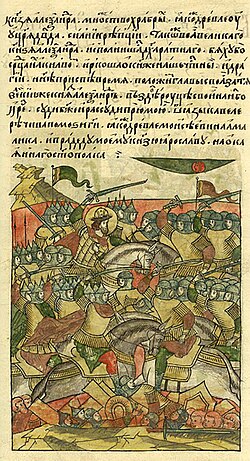 Depiction of the battle in a Russian chronicle (16th century) 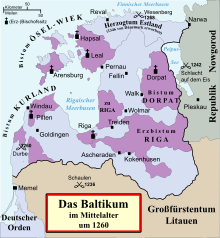 In the Battle of Lake Peipus (also: Battle of the Ice ) on April 5, 1242, a Russian army under the leadership of Prince Alexander Newski in Novgorod destroyed an armed force of the Livonian Order - the union of the Teutonic Order and the Order of the Brothers of the Sword - and thus started its eastern expansion The End. While traditional Russian historians have greatly exaggerated the importance of the battle, its scope and scope are controversial in international history to this day.

The Russian principalities saw themselves threatened from three sides at the beginning of the 13th century. In the south, the Kievan Rus succumbed to several attacks by the Mongols under Genghis Khan and Batu Khan between 1223 and 1240 . The latter undertook a first campaign against northern Rus from 1237 to 1239 . At the same time, their areas - including the Republic of Novgorod and the Grand Duchy of Vladimir , which were able to maintain a certain independence through tribute payments to the Mongols - saw increasing attacks by the Danes and Swedes from the north and by the troops of the Bishop of Dorpat as well the Knights of the Teutonic Order and the Order of the Brothers of the Sword from the West exposed. Above all, the rich trading metropolis of Novgorod , located on the Volkhov north of Lake Ilmen , saw its trade severely disrupted.

The Novgorod boyars therefore elected Alexander Yaroslavich , son of the Grand Duke of Vladimir , to be their prince in 1236 . He defeated 1240 from Finland penetrated Swedish invasion army under Birger Jarl in the Battle of the Neva near present-day St. Petersburg , which earned him the nickname "Nevsky".

In the same year the threat from the German Crusaders and the Knights of the Teutonic Order, into which the Order of the Brothers of the Sword, which mainly operates in Livonia , was incorporated in 1237, became acute . Under the leadership of the Bishop of Dorpat, Hermann I. von Buxthoeven , they advanced from Estonia to the Novgorod area. The situation for the city became dangerous when the order of knights took Pskow (Pleskau) south of Lake Peipus , which was important for the protection of the Novgorod trade routes . Under Nevski's leadership, however, the Novgorodians managed to recapture the Koporje fortress in 1241 and Pskov themselves in March 1242.

The course of the battle

After these initial successes, Nevsky decided to take the fight to the territory of the knights of the order and advanced west towards the Izborsk fortress . In early April, however, the knights and their Estonian auxiliaries defeated a Novgorodian vanguard and pursued them on their retreat across the ice of Lake Peipus .

In order to prevent the army of knights from circumventing Pskov in the north, the main Russian armed forces moved against the repulsed but still operating vanguard and united with them on the east bank of the frozen lake. Here they faced their pursuers for battle on April 5, 1242 .

Like almost all mediaeval sources, the contemporary reports on the Battle of Lake Peipus are very imprecise in their numerical data. Earlier Russian estimates put around 15,000 fighters on the side of the Novgorodians and around 10,000 on the side of the knights of the order. Non-Russian historians have always expected significantly lower numbers. Today, even among Russian experts, 3,000 to 4,000 fighters on Novgorod's side - including Druzhina Alexander Nevsky - are likely. The order's armed force, on the other hand, was likely to have consisted of only 500 to 600 mounted soldiers and 1,000 to 1,200 Estonian foot soldiers. According to a historical chronicle, only 30 of the knights were real armored riders, each with 5 to 6 additional riders. That would result in a number of at most 200 riders.

The battle took place in the southeast corner of Lake Peipus near the island of Woroni Kamen (Rabenstein). It was opened at daybreak with an attack by the mounted troops of the Order's army. They advanced in a wedge formation against the Russian center, which consisted of foot troops from the Novgorod militia . These retreated to the shore of the lake and their ranks were almost broken. However, on the sloping and icy embankments, the knights could not fully develop their power. In addition, the left and right flanks of the Russian army withstood all attacks and prevented the knights from being able to use their partial success in the center.

The final phase of the battle began when Nevsky sent his Druzhina, whom he had previously held back in an ambush, into battle. The horsemen bypassed the right wing of the knight army and attacked it in the back. Now surrounded on all sides and crowded together in a very small space, the knights no longer succeeded in using their usual fighting technique, the massive cavalry attack.

In contrast, the Novgorod infantry could push the knights from their horses with lances and then kill them. Many are said to have drowned when the ice gave way in places under the weight of the armored riders. Only a few knights managed to break through the encirclement and flee across the ice in the direction of the west bank, about ten kilometers away. According to Russian sources, around 500 knights and numerous fighters from the Estonian infantry are said to have been slain and 50 noble members of the Teutonic Order were taken prisoner. Here, too, the numbers from Western historians are lower.

As a direct result of the battle on Lake Peipus, the Teutonic Order concluded a peace agreement with Novgorod in the summer of 1242. It established the Narva as the border river between Novgorod and the countries of the order and provided for a mutual exchange of prisoners as well as the permanent renunciation of the order to further conquests of Novgorod territory. This result was confirmed in 1268 by another Russian victory over a German-Danish army of knights in the battle of Wesenberg .

The expansion of the Teutonic Order now shifted to northern Estonia and the Žemaiten area in the south. Since not only in the battle Russians in German , Danes and Estonians were encountered, but also Orthodox to Catholic Christians, their output, certain long term, the spheres of influence of the Eastern and the Western Church in the Baltic region .

In the long term, Newski's success was also decisive for the further course of Tatar rule , during which the principalities of northern Rus were able to maintain their autonomy under the rule of the Golden Horde . Newski's son Daniil Alexandrovich received the then insignificant principality of Moscow from the Golden Horde, which was to become the nucleus of the Russian tsarist empire under his successors .

Like the Varus Battle in Germany, the battle on Lake Peipus has and continues to occupy a special place in Russian historical consciousness. Alexander Nevsky was canonized by the Russian Orthodox Church in 1547 and is still considered the country's national saint today . Among other things, the Russian Alexander Nevsky Order and the Alexander Nevsky Cathedrals, churches and monasteries in many cities remember him .

A heroic cinematic portrait of the general, in which the depiction of the battle on Lake Peipus takes up a large space, was created by the Soviet director Sergei Eisenstein in 1938 with his work Alexander Newski . The film, for which Sergei Prokofiev composed the music, portrays the Knights of the Order as brutal invaders who end up sinking into the ice. In the German-Soviet war it served the Stalinist propaganda , since the Russian defense against the knights of the order could be interpreted as a parallel to the fight against the armed forces .