The title of this article is ambiguous. Further meanings are listed under spinning wheel (disambiguation) . 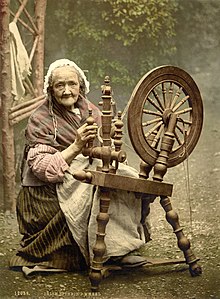 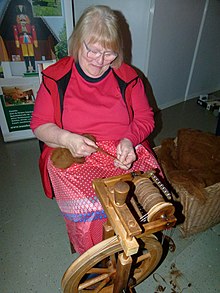 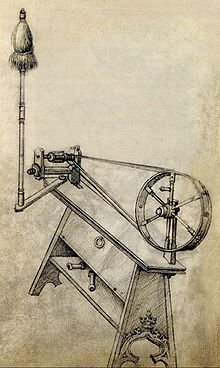 The oldest depiction of a wing spinning wheel in the medieval house book of Wolfegg Castle, 1480

The reason for the restriction to weft yarn is controversial in research. The bans may have been enacted to protect the high quality of the woolen yarn produced by hand spindle . For example, the so-called Livre des metiers from Bruges (approx. 1349) states that wool spun with a spindle spinning wheel is generally too weak, uneven, inadequately twisted and too knotted. The spindle spinning wheel remained in some regions until the 15th and 16th. Banned for guilds in the 19th century.

The first visual evidence of a (still hand-driven) wing spinning wheel dates back to 1480. The inventor of this completely new functionality of the spinning wing is unknown. A little later, Leonardo da Vinci designed a spinning mechanism with a longitudinally movable spinning wing, which, however, was not widely used. A kick is known from the middle of the 17th century.

Both of the above were used as templates for the first mechanical spinning machines of the 18th century. Spinning wheel systems. The somewhat older Spinning Jenny is based on the two-stage settling technique of the simple spindle, while the Waterframe , which was developed almost at the same time, used spinning blades.

Even after the introduction of spinning machines, the vane spinning wheel was still used in the home and was part of the bride's trousseau until the 19th century.

Even today, modern vane spinning wheels are still being built and technically developed by numerous European and non-European craft businesses, mostly for the needs of leisure spinners. There are even electrically operated spinning "wheels" in which the thread is still pulled out by hand, while the flywheel is replaced by the electric drive. These spinning devices are mainly used in small businesses.

Structure of the wing spinning wheel 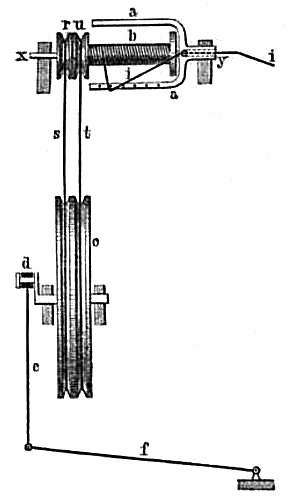 The principle of operation of the spinning wheel

A vane spinning wheel consists of the following mechanically effective parts (the letters in brackets refer to the diagram opposite):

The construction can be very diverse. There are types with a bench and three or four legs and a structure on it, but there are also types whose frame stands directly on the floor. The spinning wing can be arranged to the side of the flywheel or above the flywheel. All types can also be equipped with two spinning wings. With these so-called double spinning wheels, the spinning person can produce two threads at the same time.

Functional principle of the wing spinning wheel in general

To do this, three speeds have to be coordinated with one another at the same time, namely how fast you step, take off and let it run into the spinning wing. 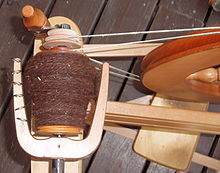 In the so-called two-thread spinning wheels, both the wing whorl and the bobbin whorl are driven by a single drive belt, but in the form of an 8 crossed drive belt. One of the two whorls - usually the bobbin whorl - must have a smaller diameter, which means that the bobbin rotates faster than the wing and the thread can wind itself on the bobbin. 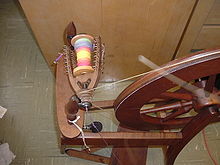 Only the spinning wing is driven directly via the wing whorl. The coil is dragged along by friction. Your running speed is slowed down by a cord (also called Scottish brake) over the bobbin whorl.

The spool is driven directly via the drive belt, there is no additional wing whorl. In order to reduce the speed of the dragged spinning wing, a leather strap or the like is attached over the front end of the spindle (feed opening). The pressure on this so-called wing brake can be regulated.

Structure and functional principle of the spindle spinning wheel

The older spindle spinning wheel, which, in contrast to the vane spinning wheel, is always driven by hand, is also called the big wheel, traveling wheel, hand spinning wheel or (tree) wool wheel. The flywheel and spindle are arranged on a board and connected by a drive belt. This type includes e.g. B. the Charkas used in India for spinning cotton and the so-called Peterrad, which is based in Wendland in Lower Saxony, for spinning coarse flax tow .

The flywheel is turned with the right hand. The left hand simultaneously pulls the fiber supply back at an angle of 45 ° to the spindle alignment. The spinning person can spin as long a thread as his arm reaches back. The speed at which the twist enters the fibers must be matched to the speed at which the hand is withdrawn. The resulting thread must then be wound onto the spindle manually.

Other uses and accessories

Spun threads are usually still twisted on the spinning wheel for further use , i. That is, two or more single threads are twisted together into a far more durable yarn . For this purpose, a so-called bobbin block is used, which carries the spinning wheel bobbins , from which the individual threads can run freely. For this purpose, each spinning wheel usually includes at least two spare bobbins. In order to finally pull the yarn off the spinning-wheel bobbins , a rotary or cross- reel is required to produce strands that can then be washed, dyed and traded if necessary.