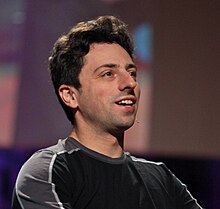 Sergey Brin at a TED conference in 2010

Together with Larry Page he developed the search engine Google . The prototype was launched on September 7, 1998.

Sergey Brin was born in the Soviet capital Moscow as the son of the mathematician Michael Brin . Both parents were of Jewish descent and the father in particular suffered from covert anti-Semitism in the Soviet Union , which made academic careers difficult for Jews . In September 1978 the family submitted an application to leave the country , which was finally granted after some harassment. In May 1979 the family left the Soviet Union for the United States. Sergey Brin was five years old at the time.

Brin attended Montessori School in Adelphi , Maryland , while also receiving home schooling from his father, who was a professor of mathematics at the University of Maryland at College Park . After visiting the Eleanor Roosevelt High School in Greenbelt , he began studying computer science and mathematics at the University of Maryland, which he in May 1993 with the Bachelor of Science with the title with honors graduated. He then studied computer science at Stanford University with a graduate scholarship from the National Science Foundation , where he began a doctorate , which he has not yet completed because of the establishment of Google.

When the company went public, Brin became a multi- billionaire . According to Forbes magazine 's "World's Richest People" list, from 2004 to 2005 he increased his fortune more than sevenfold.

In 2005 he was elected to the American Academy of Arts and Sciences .

From May 2007 to May 2015 he was married to Anne Wojcicki . The two have two children. The couple separated in 2013 and have been divorced since June 2015. Brin lives in Los Altos, California .

In 2013 Brin had a cameo in the movie Prakti.com with Owen Wilson and Vince Vaughn , which is largely set at Google's headquarters in California.

Brin is one of the founders of the Breakthrough Prize in Life Sciences , currently the most prestigious award in the world.

Sergey Brin is a multi-billionaire. According to the Forbes list in 2019 the property was Sergey Brin about 49.8 billion US dollars . He was ranked 14th on the list of the richest people in the world in June 2019 and is the richest immigrant in the United States, according to Forbes.