The tow , also known as Werch , Abwerch , Werrig , Hede or the Kauder as a working material, is a low fiber quality that is produced when swinging, ribbing and panting (cleaning) of bast fibers such as linen , hemp or jute as waste at work (with " Work "). It can partly consist of short and coarse pieces of fiber as well as fibers in a tangled layer and be contaminated by dirt and shives . It is a by-product of long fiber production .

Flachswerg consists of 70 to 95% of about 100 to 500 millimeter long pieces of fiber as well as parts of dust and shives , with Hanfwerg the length varies between 10 and 500 mm, with up to 98% fiber. The thermal conductivity of Flachswerg as an insulation material is similar to that of conventional insulation materials at around 0.040 W / (m · K). 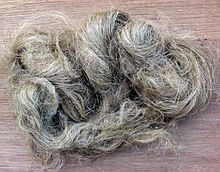 The tow is cleaned, refined and parallelized for later processing. It can then be spun into yarns (tow yarn) and cords in dry and wet spinning processes or used unspun (e.g. as a sealant or filler, in the paper industry or for nonwovens).

The use of hemp dwarf together with wood tar, pitch or rubber in caulking to seal joints between wooden ship planks is of particular historical relevance . The method is still used today for the construction of Arab dhows and other wooden ship constructions in the Indian Ocean. In Germany, the few wooden ships still in existence are mainly caulked during repair work, while new buildings in classic wooden construction are very rare. In the Middle Ages, tow was used as a raw material for incendiary projectiles , such as B. the falarika . For this it was mixed with pitch, sulfur or natural resin and set on fire before being thrown away.

In sanitary engineering - despite the “more modern” alternative Teflon tape - flax or hemp dwarf is still often used to seal water and heating pipes by filling the thread gaps. When exposed to liquid, the fiber swells, the swelling subsequently supports the sealing effect. If the pipe is to be welded or soldered close to the screw connection , hemp offers a high temperature stability that cannot be achieved with Teflon tape. Hemp also withstands the high mechanical stress when screwing on better than Teflon. The screwing back to z. B. to precisely align angled pipes is only possible with hemp seals; Teflon seals are destroyed in the process. See also: Sealing material # Sealing hemp

Just like short fibers , tow can be used as an inferior fiber fraction in the production of technical textiles and pulp .

Because it burns quickly to fine ashes, tow was often used as a symbol of impermanence, including in the Bible. In the early Middle Ages, the Byzantine Empire saw the tradition of burning tow at the coronation of rulers to indicate the transience of their power. The tuft of tow, which burned to fine ashes, should symbolize what the emperor has ( quod habet ). Presumably between 1064 and 1140 this tradition was adopted for the papal inauguration. To this day, the white smoke from burnt tow not only indicates to the waiting crowd on St. Peter's Square that the election of the Pope has taken place , but also refers to the transience of power. In the old coronation ritual (which has been omitted by the Popes at their own request since 1963), the symbolic burning of tow was accompanied by the three-fold formula “Sancte Pater, sic transit gloria mundi ” ( Holy Father, so the glory of the world passes ).