Caulking and pitching a wooden ship, from left with dweiel, caulking iron and hammer, scraper

Caulking (also: Kalfaten , Arabic kafr " asphalt " and kalafa ) is an activity in shipbuilding in which the seams between wooden ship planks are sealed with tow or cotton and wood tar , pitch or rubber .

The tow or cotton is hammered into the seams with caulking iron using a caulking hammer before they are closed with pitch or with a special rubber compound .

The Kalfathammer (in some sources also known as a sealing hammer or ship's hammer hammer ) has a wooden cylindrical head with a diameter of about six centimeters and a length of about 20 to 30 centimeters. To protect it against splintering, it is provided with several steel rings. The best wood for the head is pockwood because it is very hard and heavy and does not split easily. Other hardwoods are also used because it is difficult to obtain. More recently, plastic hammers have also been offered. Like other tool handles, the handle is usually made of ash . It is slightly thickened at one end, and there is a matching conical hole in the hammer head. If the handle is pushed through the hammer head with the thin end first, the head cannot loosen during the work. 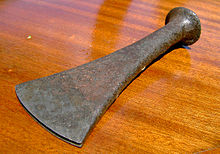 The cauliflower irons are made of forged steel. They have a round head and are flat and wide in the front. A sharp iron (Schöreisen) is used to attach the tow. For compacting there are irons of different strengths, which are selected according to the seam width. There are one or more grooves in the blunt leading edge called discounts . They should prevent the tow from moving past the iron when it is compacted. The number of grooves is also a measure of the thickness of the iron. These are accordingly referred to as “one-discount”, “two-discount” and so on. In addition to the straight irons, there are also cranked irons in order to be able to work on difficult areas such as the transition between deck and superstructure, there are also narrow butt irons for the narrow ends of the planks (buttes).

A caulking box is a box that you sit on in order to improve your position while working, for example when caulking the floor. You can also store the rest of the tools and tow in it.

The Dweiel (Dweidel) consists of a piece of wool similar to the bobble of a bobble hat, which is attached to a stick. It is used to smear the liquid pitch into the spaces between the planks. Wool is used because it is more heat-resistant than plastics.

The caulking joint narrows downwards and ends after about a third to half of the plank thickness. The tow is started with the poker, so that the end hangs down. Then the tow is pressed a few centimeters below the seam with the iron to the lower plank and pushed up into the seam so that a loop is formed, which is then hammered in with the caulking hammer. This is followed by compacting with a stronger iron. Finally, in the Middle Ages, the cauliflower seams were covered on the inside with cauliflower strips (which in the Bremen cog consisted of split willow branches ). Iron served to hold the strips Kalfatklammern , also called Sinteln be called. Their shape and number is an archaeological aid for dating.

How hard the tow is felled depends on the type of vehicle and the moisture in the wood. Fishing cutters, for example, are robust vehicles and lie in the water all year round so that the planks do not swell any further when they are launched. Therefore the tow is hammered very hard.

Caulking has to be done much more carefully on boats that have been on land for a long time. If the planks are compressed too much, there is no room for swelling - as a result, the planks can become detached from the frames .

The shedding of bad luck

Caulking and burning the hull in the 18th century

On decks, a steel bag filled with hot pitch is used for this purpose, the outlet diameter of which can be changed by an iron placed in front of the outlet. If this is not at hand, an old soup ladle is often used. When working on the sides and bottom of the ship, pouring is not possible for obvious reasons, a dweiel is used here. This is dipped into the hot pitch and then with a twisting movement, the seams are filled as well as possible. Pitching can lead to burns. The swollen edges are scraped off with a scraper after cooling.

Polyurethane rubbers (PU) and silicone- based rubbers are used as casting compounds . Compared to PU, silicone has the disadvantage that it cannot be sanded or painted. However, its elasticity is significantly higher, so that the work of the planks can be better balanced. Compared to traditional pitching, the plastics have the advantage that they can be processed much easier, faster and cleaner.

The method is still used today for the construction of Arab dhows and other wooden ship constructions in the Indian Ocean. In Germany, the few wooden ships still in existence are mainly caulked during repair work, while new buildings in classic wooden construction are very rare.