Guaiac ( Guaiacum ) refers to a genus of the yoke leaf family (Zygophyllaceae). It contains six to eight tree species from tropical and subtropical America. Some supply the guaiac resin , and the very heavy guaiac wood is also used.

Guaiacum species are trees or shrubs with very hard, resin-rich wood. The leaves are opposite, in pairs, with four to 28 sessile pinnate leaves. The leaflets have entire margins, are asymmetrically shaped and have a leathery consistency. The stipules are small and triangular.

The flowers stand individually in the leaf axils or are grouped in zymous inflorescences. The flowers are stalked and radially symmetrical, their color is blue, red, purple or white. There are four or five sepals that are not or at the base fused together and fall off early. The four or five nailed petals are also not fused together, their shape is broadly inverted-egg-shaped. Eight to ten stamens with subphrate stamens and elongated anthers are present. The upper and stalked ovary consists of two to five carpels. The result is a leathery and pointed, two- to five-compartment, septicidal and ribbed to winged capsule fruit . It contains only one oval seed with a red aril in each compartment .

There are six to eight species in the genus of guaiac trees ( Guaiacum ) in tropical and warmer America: 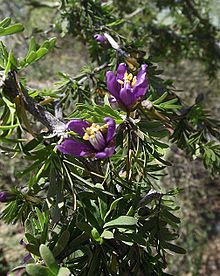 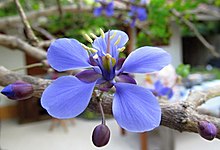 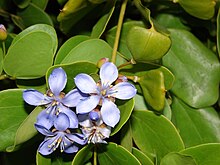 The wood, ironwood , is very heavy (density about 1.2 to 1.3 g / cm 3 ), firm, hard, brittle, splits difficult and irregular, is dark greenish- brown, surrounded by light yellowish sapwood and sharply delimited by it. The wood is tough and therefore cannot be planed. On older, more than 20 cm thick trunks, the sapwood is so weak that it cannot be seen. In the core and in the sapwood there are alternating lighter and darker layers that form very numerous circles reminiscent of annual rings. The sapwood is tasteless; the heartwood tastes weakly aromatic, a little scratchy and develops a weak, pleasant odor when heated. It is very resinous (25-27%).

In the Mayan culture , decoctions of the wood were used to treat the sexually transmitted disease syphilis . Guaiacum officinale and Guaiacum sanctum supply the guaiac wood (French wood, pock wood) and the guaiac resin obtained from it. The word guaiac is of West Indian origin. The Latin name Lignum Vitae refers to the supposed healing and life-prolonging properties of this wood, which was famous in the 18th century.

The Spaniards learned how to use wood from the natives of Santo Domingos . The first records of therapy against syphilis can be found in the work "Summario de la natural y General de las Indias" (1526) by Gonzalo Fernández de Oviedo y Valdez (1478–1557). The Spaniards brought it to Europe in 1508 under the name Palo santo (Lignum vitae, Lignum sanctum), where it was still very expensive in 1532. In Europe it was used for the first time against syphilis in 1539 according to the “Tractado contra el mal serpentino” by Rodrigo Ruiz Diaz de Isla (1462 – approx. 1542). In Germany contributed Nicolaus Poll (in 1517) and Leonhard feast (in 1518), but especially Ulrich von Hutten (in 1519) with his work "De guaiaci medicina et morbo Gallico liber unus" to spread the holy or Indian wood at . After using mercury for a long time and in vain, the latter claims to have owed his alleged cure for syphilis to the wood of life ; But Paracelsus speaks out vehemently against these uncertain healing methods. Wood and bark were still crushed in the 19th century and used as a remedy for syphilis (as tea ), stubborn chronic rashes , rheumatism and gout .

The German expression "pock wood" is based on the earlier use of extracts from wood as a supposedly effective drug to cure smallpox disease .

Nowadays the pharmaceutical industry uses guaiac extracts for the preparation of homeopathic preparations.

To detect blood that is not directly visible in the stool of patients, a small stool sample is placed on filter paper soaked with guaiacum resin. The hemoglobin in the blood then becomes visible through a reaction with hydrogen peroxide : the test strip turns blue.

At least 20 tons of wood are used in Germany every year as an aromatic essence for the preparation of herbal liqueurs . In addition, the guaiac resin is offered as a component of smoking mixtures . The scents of the resin are said to have both stimulating and calming influences.

About 50 tons of the wood are used annually for solid wood construction. As one of the hardest woods of all, pockwood was used for shipbuilding centuries ago - for mooring nails and maidenheads , for the manufacture of axle bearings (axis to the ship's propeller, hydroelectric power plant), press rollers, cone balls, mortars and pestles , hammers for caulking, etc. It is suitable for highly stressed parts such as ship bearings, especially at the hull exit of the ship's shaft to the screw, where it also has a lubricating and waterproofing effect, gears and tools, for example as a plane sole for carpenter's planes. The balls used in the Frisian national sport Boßeln are made of this very resistant wood, which is 23% heavier than water and therefore goes down.

According to the decision of the 12th Conference of the Parties for the Protection of Traded Animal and Plant Species ( CITES ), international trade in the wood and resin of the species of the tropical guaiac or pockwood tree (Guaiacum) has been subject to approval since November 26, 2002. At the request of Germany, the previous protection of two species of the guaiac tree was extended to all species of the genus. Its inclusion in Appendix II of the Convention does not prohibit the trade in this wood, but instead requires a permit. The aim is to make the trade in pockwood species sustainable in the long term.