Jochblattgewächse (Zygophyllaceae) are a family in the order of the zygophyllales within the flowering plants (Magnoliopsida).

They are mostly trees , shrubs or half-shrubs , rarely annual or perennial herbaceous plants . Some species are xerophytes . The nodes are often thickened. The leaves, which are rarely alternate or mostly opposite, are usually stalked, simple or (usually in pairs) pinnate, often they are fleshy. The stipules are often preserved for a long time and they are often transformed into thorns.

The racemose or zymous inflorescences are solitary, terminal or axillary. The mostly hermaphrodite flowers are fivefold, sometimes fourfold; they are radial symmetry or rarely zygomorphic . Only the Neoluederitzia are dioeciously separated sexes ( diocesan ). They have free or at most fused at their base petals and sepals . There are one to two circles with four to five free stamens , most of which have scales at their base. Rarely two or three, usually four to five carpels have become a top permanent ovary grown. In each ovary chamber there are one to several hanging ovules . Usually there is only a thin stylus that ends in a cephalic to slightly four to five-lobed scar. 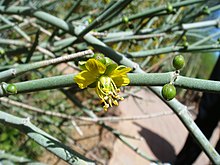 The Zygophyllaceae are a variable group that thrives in more or less arid and saline ( halophilic ) areas in many parts of the world. Most species have a tropical or subtropical distribution, but they are also rarely found in warm temperate areas.

The family was first published in 1814 by Robert Brown under the name "Zygophylleae" in A Voyage to Terra Australis , 2, p. 545. Type genus is Zygophyllum L. Synonyms are for Zygophyllaceae R.Br. are Balanitaceae M.Roem. and Tribulaceae Trautv. Since the overview work by Engler in 1931 and Scholz in 1964 on Zygophyllaceae, it has been divided into seven subfamilies and a number of tribes and subtribes. This remained essentially unchanged for a long time until two of the subfamilies to the Sapindales are now in the family of the Nitrariaceae ( Peganum , Malacocarpus , Tetradiclis and Nitraria ) by Gadek et al. 1996 and Sheahan & Chase 1996 were spun off. The genus Krameria L. forms its own family Krameriaceae Dum. The two families Zygophyllaceae and Krameriaceae are the only families of the order Zygophyllales (as early as APG 1998).

The yoke leaf family (Zygophyllaceae) is now divided into five subfamilies, with 25 to 27 genera and around 240 to 285 species :

The guaiac tree ( Guaiacum officinale ) supplies the wood called "Lignum vitae" with extremely high density and hardness. Some species of Guaiacum , Zygophyllum , Tribulus and Larrea are used as ornamental plants in warm areas .

The flower buds of Larrea tridentata are inserted as a substitute for capers; A tea is brewed from the bark and leaves. The medicinal effects of this species have been studied.