Krameria , sometimes called Ratanhia, is the only genus of plants of theRatanhia family ( Krameriaceae ) within the order of the zygophyllales . The approximately 18 species occur only in the Neotropic .

Krameria species grow as shrubs or perennial herbaceous plants . They are parasitic plants, more precisely: semi-parasites also called hemiparasitic plants ; there is a wide range of possible host plant species. The roots of the seedlings have no root hairs and the roots must be connected to the host plant for the first two months . Secondary growth in thickness is based on a conventional cambium ring .

The alternate and spirally arranged leaves are apparently mostly simple, they are obviously composed in Krameria cytisoides and always with entire margins. There are no stipules.

Zygomorphic flowers of Krameria erecta . The display device are the purple sepals. The darker, oil-producing, reduced petals are also recognizable. The yellow stamens are directed downwards in this species.

They form racemose inflorescences or the flowers stand individually in the leaf axils. The flowers each stand over two tiny bracts .

The five-fold, hermaphrodite, zygomorphic flowers have a double flower envelope and look somewhat similar to pea flowers . Of the usually five (rarely four) sepals of different sizes , the outer three are usually larger than the inner; they are the conspicuous part of the flower, pink, purple or yellow and petal-like. Of the reduced usually five (rarely four) differently shaped petals , the three upper ones are nailed. The two lower ones are usually smaller, broad and thick; here the secretion of oil takes place to attract the pollinators. There are usually four, rarely three or five unequal stamens , they can be free or fused together. Staminodes may be present. Only one of the two carpels develops and forms the upper, single-chamber ovary . Each ovary contains only two pendulous, collateral, anatropic, bitegmic ovules .

Bees of the Centris genus collect oil from the flowers and ensure pollination ( entomophilia ).

The fruits are prickly and contain only one seed each. There is no endosperm . The well-differentiated embryo is straight. The two thick cotyledons ( cotyledons ) are large and heart-shaped.

The areas of about 18 species are only in the Neotropic . Their homeland ranges from the southwestern United States to Chile and the Caribbean islands. Ten species occur from Kansas across the southwestern United States (with disjoint populations of a species in Florida and adjacent areas in Georgia ) to Costa Rica . Six species occur from northern Colombia to east-central Brazil , with one species ( Krameria ixine ) reaching Sinaloa, Mexico and the Greater and Lesser Antilles. Two types occur in western-central South America in Peru , Bolivia , northern Chile and Argentina .

They thrive in warm arid and semi-arid areas.

Habit and flowers of Krameria grayi 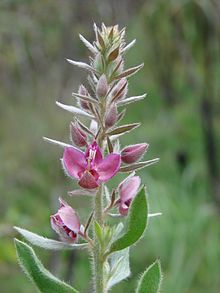 The genus Krameria was established by Carl von Linné in 1758 . He was the editor of the botanical travelogue Iter hispanicum , Stockholm, written by Pehr Loefling : Lars Salvii Kostnad. On page 195, Linné gave the new genus, which Loefling had called Ixine in his manuscript , the name Krameria . Type species is the Krameria ixine L. published in Linnés Systema naturae , Editio Decima 1759, Vol. 2, p. 899. The Krameriaceae family was established in 1829 by Barthélemy Charles Joseph Dumortier in Analyze des Familles de Plantes , 20, 23. First the genus Krameria was placed in the Polygalaceae family, then led by Barthélemy Charles Joseph Dumortier in 1829 as a separate family and Paul Hermann Wilhelm Taubert classified in the Leguminosae in 1892. In 1989 Beryl B. Simpson reactivated the Krameriaceae family in Flora Neotropica , Monograph 49, pp. 1-109. The Krameriaceae and Zygophyllaceae s. st. are sister families. The generic name Krameria honors the Austrian military doctor Johann Georg Heinrich Kramer (1684–1744), who also worked as a botanist.

There are around 18 species of Krameria : 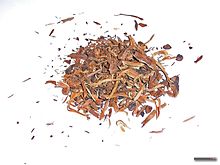