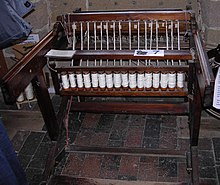 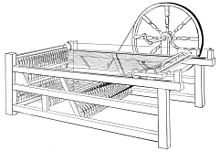 Spinning Jenny (or just Jenny ) is the name of the first industrial spinning machine for spinning of cotton fibers to yarn . At first glance, the machine looked like a spinning wheel with up to 100 spindles ; In contrast, it worked in a similar way to the manual spindle using the settling process.

With its high increase in productivity compared to the spinning wheel, the Spinning Jenny is considered a milestone in the industrial revolution and the history of technology .

The inventor of the spinning jenny was the weaver James Hargreaves from England in 1767. The innovation made the spinning process much more productive. With it, a spinner could supply exactly one weaver with primary material. Previously, the ratio had been four to eight spinners and one weaver. A functional model of the Spinning Jenny can be seen in the permanent exhibition of the Cromford textile factory .

The spinning jenny quickly spread throughout the textile industry because, unlike many other textile machines, it could still be powered by human muscle power. The work process was, however, quite demanding: the actual spinning of the fibers, separate from the subsequent winding of the finished thread , took place on all spindles at the same time. In addition, the spinner could no longer supply the fibers with his own fingers, but had to develop a feeling for the behavior of his own machine, which was working here with claw-like pliers . Thus the demands on the qualification of the spinner increased considerably.

In the following decades, more powerful spinning machines, such as the Waterframe , the Spinning Mule and the Self-Actor , replaced the Spinning Jenny. These were always powered by an external source of energy such as the water wheel and later the steam engine.

The origin of the name is unclear. Some sources report that Hargreaves had a daughter (or wife) named Jenny who knocked over a traditional spinning wheel and thus inspired Hargreaves to invent (and name) him. According to the church birth records, however, neither of his daughters nor his wife were named Jenny. Jenny 'was, however, at this time a short form of' engine '( Engl. For' machine '), what the name Spinning Jenny could have led.