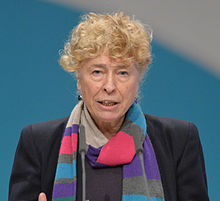 Gesine Marianne Schwan (née Schneider ; born May 22, 1943 in Berlin ) is a German political scientist and member of the SPD . From 1977 to 1984 she was a member of the SPD's Basic Values ​​Commission . After an interruption in 1996, she was re-accepted into the SPD Fundamental Values ​​Commission. She has been the chairman of the board since 2014.

The daughter of the elementary school teacher and later high school councilor Hans R. Schneider and his wife Hildegard, a politically active Catholic, grew up with her parents and brother in Berlin- Reinickendorf . Her mother came from Lublinitz in Upper Silesia, which became Polish in 1922, and described the coexistence of Germans and Poles in the formerly Prussian town positively. Her socially committed family belonged to Protestant and socialist resistance groups during National Socialism and hid a Jewish girl in the last year of the war. After the war, the family campaigned for friendship with Poland . At the French Gymnasium Berlin Gesine Schneider passed the Abitur. There she was Reinhard Mey's classmate .

From 1962 she studied Romance studies , history , philosophy and political science at the universities of FU Berlin and Freiburg im Breisgau . She started learning Polish as a student . Study visits took her to Warsaw and Kraków . There she prepared her doctorate on the Polish philosopher Leszek Kołakowski , which she completed in 1970. When Kołakowski received the Peace Prize of the German Book Trade in 1977 , the then 34-year-old Schwan gave the laudation at the award ceremony in the Paulskirche in Frankfurt . She was a scholarship holder of the German National Academic Foundation .

In 1971 Gesine Schwan started out as a research assistant at the Political Science Department at the Free University of Berlin. In 1975 she received her habilitation there . From 1977 she taught as a professor of political science at the Otto Suhr Institute at the Free University of Berlin, and from 1992 to 1995 she was dean at the Otto Suhr Institute. Her academic focus is on political theory and philosophy, democratic theory and political culture.

In the course of her professorship she researched from 1980 to 1981 as a fellow at the Woodrow Wilson Center for Scholars in Washington, DC , USA . Further research stays followed in 1984 as a visiting fellow at Robinson College of the University of Cambridge and in 1998 as a visiting professor at the New School for Social Research in New York . From 1985 to 1987 she was chairwoman of the German Society for Political Science.

From October 1st, 1999 to October 1st, 2008 she was President of the European University Viadrina in Frankfurt (Oder) . Her election took place a good two months before taking office on July 22, 1999 by the Academic Senate of the Brandenburg University Council , after she had lost to her opponent Peter Gaehtgens in the presidential elections of the Free University of Berlin a few months earlier .

On January 16, 2004, in an interview with DeutschlandRadio Berlin , she described the current discussion on the subject of “elite universities in Germany” as “short-sighted”. She did not understand how five or ten elite universities should improve the entire education system, she commented on proposals. “The idea that a democratic education and society can be promoted by some elites and that everyone else is lagging behind is completely wrong.” On March 1st, 2008 she achieved her central university policy goal, the transformation of the European University Viadrina in Frankfurt / Or a foundation university , the first in the state of Brandenburg. In October 2008 she was succeeded by Gunter Pleuger in the office of Viadrina President.

Together with Stephan Breidenbach , Alexander Blankenagel and others, she founded the Humboldt-Viadrina School of Governance and was its elected President from June 15, 2010 until the end of the university in 2014. With the bankruptcy petition on June 1, 2014, teaching had to be stopped. The students were able to continue their studies at state universities. Today she is president and partner of the follow-up project Humboldt-Viadrina Governance Platform gGmbH .

Gesine Schwan is a teacher at the Academy for Social Democracy .

Under the influence of Willy Brandt's Ostpolitik at the end of the 1960s, Gesine Schwan joined the SPD in 1972. She was involved in founding the Seeheimer Kreis , which in the 1970s opposed neo-Marxist positions in the SPD, among other things. In 1977 she became a member of the SPD's Basic Values ​​Commission . At the beginning of the 1980s, the avowed Catholic and militant anti-communist advocated NATO's double decision . Since she criticized the way in which the SPD dealt with communist regimes as "lax", she was expelled from the SPD's basic values ​​commission in 1984 with publicity. At the time, she took the position that Willy Brandt had not opposed the trend at the time of trivializing the opposition between democracy and dictatorship as a pure theory. In 1996 she was reassigned to the body . Schwan has been chairwoman of the SPD Fundamental Values ​​Commission since 2014.

Gesine Schwan was the coordinator for the German-Polish cooperation of the federal government from 2004 to 2009 . In this function, she promoted a deeper understanding of Poland in the Federal Republic and was committed to border-related and civil society cooperation with Poland. She kept the office that she had assumed under the Schröder government under the Chancellor of the Grand Coalition, Angela Merkel . In the dispute over the Center against Expulsions , she sharply criticized the chairwoman of the Union of Expellees , then CDU MP Erika Steinbach , and promoted the position of the Polish government. Her successor in the office was the Minister of State at the Federal Minister for Foreign Affairs , Cornelia Pieper .

In September 2010 Schwan was involved in founding the Spinelli Group , which advocates European federalism .

In August 2019, she announced her candidacy as SPD chairman in a duo with her party colleague Ralf Stegner . Among six pairs of candidates, the duo came last with 9.6% of the votes in the first ballot.

While studying in Freiburg im Breisgau, she met the political scientist Alexander Schwan , whom she married on July 17, 1969. She adopted two children with him and published some publications with him. Alexander Schwan had been a member of the SPD since 1967, while his wife did not join the party until 1972. However, through his experience with the student movement , he continued to develop to the right. In 1978 he left the SPD and joined the CDU . During this time he was a leading member of the anti-communist- oriented " Emergency Community for a Free University ". Alexander Schwan died in 1989, leaving behind his widow and two children. Gesine Schwan has been married to Peter Eigen , the founder of the anti-corruption organization Transparency International, since September 3, 2004 .

Gesine Schwan describes herself as a practicing Catholic . She was one of the 125 celebrities who made the v. Bodelschwingh Foundation Bethel congratulated them on the 150th anniversary in 2017.

Candidatures for the office of Federal President

On March 4, 2004 Gesine Schwan was proposed jointly by the SPD and Bündnis 90 / Die Grünen for the office of Federal President . She stood against Horst Köhler , the candidate of the CDU / CSU and FDP , in the 2004 election for Federal President in the Federal Assembly . It was the first time that the two most important candidates for the office of Federal President did not come from among the "long-serving" politicians. One consequence of this constellation was that there was a small election campaign, which Gesine Schwan in particular used to advertise her political program.

As expected, Schwan lost the first ballot. With 604 votes cast on him, Horst Köhler received one more vote than was necessary for an absolute majority. However, Schwan received at least 10 votes from the CDU / CSU and FDP camp with 589 votes.

In view of the speculation about a second term in office for Federal President Horst Köhler, Gesine Schwan was brought up for discussion as a possible SPD candidate for the Federal President's election in May 2009 . On May 26, 2008, the SPD announced that it would send Gesine Schwan into the running as a presidential candidate. In the election, Schwan was dependent on dissenters from the bourgeois camp and the votes of the Greens and the Left Party. Many observers saw this as a pointer to closer cooperation with the Left Party in the future. On May 29, 2008 Schwan wrote in the SPD party newspaper Vorwärts that the election was “not a prejudice for the federal election or for future coalitions. The only task of the Federal Assembly is to choose the person who best represents our country. ”Although she hoped for votes from the ranks of the left, at the same time she criticized the unrealistic ideas of the left. In this party there are also members who try to win votes with “ demagogic populism ”. “But like four years ago, I'll speak to representatives of this party because I'm against communication taboos. Those who vote for me have chosen constructive democratic politics. I would like to win as many members and MPs of the 'left' as possible for democracy. "

Shortly before the election, Schwan commented on the assessment of the GDR . She refused to call the GDR an “ unjust state ” because the term was too diffuse: “It implies that everything that happened in this state was wrong. I wouldn't go that far with regard to the GDR. ”The GDR was not a constitutional state either, but a state“ in which arbitrariness and insecurity were favored ”.

Her second candidacy failed again on May 23, 2009 with a share of 503 votes. It received eleven fewer votes than the SPD and the Greens, who voted for Schwan, together had in terms of voters.

Memberships and other functions

Work in boards of trustees and other bodies

Gesine Schwan was a member of the Board of Trustees of the German-Polish Science Foundation, the establishment of which she played a key role.

Critics accused her of failing to make a clear distinction between fundraising and the services offered when she initiated business with the Ratiopharm company . It was defended against it by science. Schwan himself denied the allegations.

In April 2009, in a conversation with the Frankfurter Rundschau , Schwan warned against social anger as a result of the ongoing economic crisis. If the impression were created that the perpetrators of the crisis did not have to make an adequate contribution to remedying it, "a massive feeling of injustice could spread," said Schwan. Elsewhere she explained: “I can imagine that people's anger could grow significantly in two to three months.” In a few months, “cushioning measures” such as short-time work allowances would also expire. If by then there is no glimmer of hope that the situation will improve, “the mood can become explosive”. These statements were immediately and heavily criticized, and even Schwan's party friends kept their distance. The Bavarian Prime Minister Horst Seehofer ( CSU ) and the General Manager of the German Association of Cities and Towns, Gerd Landsberg, warned against stirring up fears of social unrest and thereby encouraging them. The Federal Foreign Minister and Chancellor candidate Frank-Walter Steinmeier and Federal Labor Minister Olaf Scholz (both SPD ) referred to the functioning social security in Germany and the proven ability to act in crisis management.

Chair of the German Society for Political Science (DGfP)