Cross of the Polish Order of St. Stanislaus

The Stanislaus Order was established by King Stanislaus II. August as a single-class order on May 7, 1765 and thus on the name day of St. Stanislaus , bishop and martyr 1035-1079, for the higher nobility. According to his intention, only 100 people were allowed to be members of this order. The objectives of the order were, in accordance with the statutes, to maintain and expand the library in Kraków and to provide support through regular payments to the local hospital "Zum Kindlein Jesu".

From the fact that the newly established Polish Knightly Order had been given the name of a tortured Polish saint, and given the fact that the order was intended for families of the higher and highest nobility, it can be concluded that King Poniatowski one with the establishment of the order Wanted to bring into being a form of society in which the opportunity should be offered to finally get to know and appreciate the unified constructive power of a harmonious doing and acting in practice. Mainly, however, it was used to honor its followers or to be sold to wealthy nobles who did not meet the requirements for receiving the Order of the White Eagle .

The medal was no longer awarded after the Third Partition of Poland . The resumption of the Order of St. Stanislaus was specified on July 22, 1807 in the Constitution of the Duchy of Warsaw. King Friedrich August von Sachsen , Duke of Warsaw, the second grand master of the order, had changed the ribbon in the law of February 16, 1809 to include the order from the 18th century. Century to distinguish: An additional white stripe was arranged on both edges. At the same time it was forbidden to wear the previous medals with the new ribbon without the permission of the king. Along with the renewal of the order in 1807, the fees were also renewed: four red zloty for the hospital "Zum Kindlein Jesu", 25 red zloty for the award of the order. The first medal was awarded on March 5, 1809, the last in May 1813. In total, the medal was awarded only 18 times during this period. 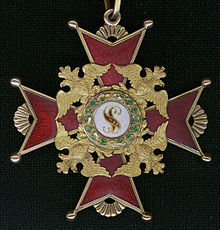 The Russian Emperor Alexander I renewed the order as King of Poland in 1815 and divided it into four classes. Tsar Nicholas I incorporated him into the Russian Order in 1831 and restricted him to three classes in 1839 (the second with two subdivisions with and without a crown). The second class (neck decoration with a breast star) could only be awarded to foreigners. From 1855 there was also a military department with swords (all Russian orders with the exception of the Order of St. George ( Russian Order of Saint George ) received swords as an additional decoration). There were two variants: swords on the ring and swords between the arms of the cross. Swords on the ring meant that military decoration could be acquired to a lower degree and transferred to a higher degree. From around 1860, 1st and 2nd class crosses and stars were also awarded with diamonds. From 1857 onwards, the 3rd and 4th grade of the St. Anne, St. Stanislaus and the Order of St. Vladimir were given swords and a ribbon ( Russian lenta s bantom ) on the ribbon. The Order of Stanislaus came after the Order of Saint Anne ( Russian Order of Saint Anne ), as the very last in the Russian system.

Nowadays there are at least three order creations that bear the name of the old Polish Order of Stanislaus. On June 9, 1979, the Order of St. Stanislaus was re-established by Juliusz Nowina-Sokolnicki . As the successor to the old Stanislaus Order, the Polish Order, which was re-established for its original purposes after the free elections in Poland and its independence in 1990 with the support of the Primate of Poland and has since been recognized by the Catholic Church in Poland, can be considered.

After differences with Nowina-Sokolnicki, the order split under the grand master Marek Kwiatkowski and was based in Warsaw in the Łazienki summer palace of the last Polish king Stanislaus Augustus II Poniatowski. In addition to Lech Wałęsa , the historian Norman Davies , the Minister of Culture of Poland, Waldemar Dąbrowski, who was in office until autumn 2005, the highest Polish military bishop, Division General Tadeusz Płoski and Gesine Schwan are members of the order. For several years there have also been priories under the Polish Order's government in various countries. The goals of the order in Germany are the understanding between Germany and Poland, the care of the physically and economically weak, the aid in disaster and emergencies as well as charitable and social engagement. The order is not officially recognized in any country.

The government of the Order of St. Stanislaus is currently headed by Waldemar Wilk. 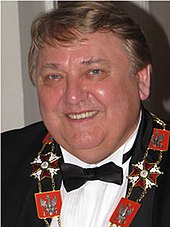 In Austria the order is organized as a charitable association. Since April 2012, the leadership of the Austrian Order has been in the hands of Dr. Alexander Graff de Pancsova.

The order is made of gold, in the size 60 × 60 millimeters and in the shape of the Maltese cross. Each corner of the cross is finished with gold balls. The arms of the cross are covered with red enamel or with white glass on a red background. In the middle is a round, slightly curved, white enameled shield with a green enameled ring around the shield. On the shield there is the figure of St. Stanislaus - Cracow bishop in colorful pontifical clothing, framed by the letters SS (Sanctus Stanislaus). Between the arms of the cross are the white enamelled crowned eagles. Between the horizontal corners of the cross is a golden branch with small roses.

The cross arms on the back are also made of gold, but not enameled, but with a fluted edge. On the middle white shield there is the royal monogram SAR (red enamel). Around the shield is a green enameled laurel wreath. A golden handle is attached between the corners of the upper cross arm, including a golden suspension for the ribbon.

The silver medal star (diameter 100 millimeters) is sewn onto the left side of the chest. Eight groups of rays form the star. In the center is the royal monogram SAR (this was often made from small garnets). All around the monogram in silver the inscription: PRAEMIANDO INCITAT, this inscription is surrounded by a green laurel wreath and the border is embroidered in silver or gold.

Duchy of Warsaw and Congress Poland until 1831

In the Duchy of Warsaw, the appearance of the insignia had changed slightly - the shape of the eagle between the crosses and the star of the order in the halo. It became a little smaller (diameter 70-80 millimeters) and the shield was made of white porcelain with the monogram SAR painted in red.

The main changes to the St. Stanislaus insignia were introduced in 1815 after the announcement of the Constitution of the Kingdom of Poland. The constitution retained the former “Polish civil and military orders” (including the Order of St. Stanislaus). On December 1, 1815, Alexander I, King and Emperor, the 3rd Grand Master of the Order, published a decree that divided the Order into 4 classes. The aim was "to distribute the order to a greater number of officials and citizens who diligently and faithfully served the kingdom."

First class remained unchanged. The medal continued to be worn on a bow as before (i.e. over the right shoulder to the left hip); the 2nd class was worn as a neck medal with a narrow bow and a medal star on the chest; the 3rd class, the order cross was smaller, was also worn on the neck and without the order star; 4th grade - a medal - was worn on the chest. At the same time, the regulation said: "Nobody may receive the higher class as long as they do not have the lower distinction."

The division into four classes was retained. The merits for the nominations were specified; anyone could run, regardless of parentage. Someone who was without nobility descent was automatically raised to the nobility with the award of the order of the 1st class. All knights awarded were given the title of "Knight of the Order of St. Stanislaus" ("Kawaler Orderu sw. Stanislawa") and they could include the order in their family coat of arms and in their seal. The reasons for the nomination included a .: "Excellent" for the empire such as scientific, social, economic, cultural and charitable activities, as well as all kinds of inventions and improvements that served the state and society.

During the Congress of Poland the appearance of the Order hardly changed, but after 1820 some elements were made very differently. In the beginning the eagles were enamelled in white between the cross arms. Later the eagles were set in between without enamel and only in silver. Instead of golden twigs with roses, golden, openwork frills appeared, the red enamel on the arms of the cross became more intense.

After 1831, the Order of Stanislaus, initially with four classes, belonged to the Russian order system as the lowest distinction. The appearance of the insignia was changed: the painted figure of Saint Stanislaus was removed from the medallion in the middle of the obverse and replaced with interwoven letters SS ( Sanctus Stanislaus ). The Polish white eagles in the corners of the order cross were exchanged for golden tsar's eagles, which until around 1860 lay with outspread wings on the arms of the cross around the medallion and were later replaced by more round eagles in the cross corners. The star of the order was not changed. The new statutes of 1839 abolished the 4th class and the star of the 2nd class - from now on the 2nd class should only be given to foreigners - and two variants of the 2nd class were introduced - with a crown and without a crown. In 1874 the crown was abolished. There were three classes until 1917.

From 1915, the Stanislaus Order was no longer made of gold, but of gold-plated copper (so-called war model).

The Kerensky government awarded it in March – October 1917 in a modified form, with uncrowned double-headed eagles in the corners. The three classes and the division with swords were retained, those with crowns abolished. The order is still in the list of house orders of the Imperial House of Russia. The exiled pretender to the throne Grand Duke Kyrill Vladimirovich Romanov is said to have awarded it several times.

In the Republic of Poland, which was re-established after 1918, consideration was given to re-establishing it. Of the old Polish, later Russian orders, only the Order of the White Eagle and the Order Virtuti Militari were renewed. The wearing of the Stanislaus Order was forbidden by law, the insignia should be delivered to the National Bank, which was seldom obeyed (the Stanislaus Order is still available in not inconsiderable quantities on the collector's market today). The Order of Stanislaus was initially replaced by the Order of Polonia Restituta , founded in 1921, which is worn on a red ribbon with a simple white border, i.e. the ribbon of the Order of Stanislaus from the time of the 1st Polish Republic.

Holder of the order