The Federal President Theodor Heuss House Foundation was established on May 27, 1994 by a law of the German Bundestag as a federal, non-partisan foundation under public law with its seat in Stuttgart . It is one of the six so-called Federal Politician Memorial Foundations and conducts research on contemporary history and civic education. One focus is the life and work of the first Federal President of the Federal Republic of Germany, Theodor Heuss (1884–1963). The foundation maintains a public memorial in his former home in Stuttgart, the Theodor-Heuss-Haus . In its research and educational work, the foundation focuses on the history of democracy and parliamentarism , liberalism , constitutions and political representation in Germany in the 20th century.

The foundation's task is to preserve the memory of the work of the first Federal President, Theodor Heuss, and to “make a contribution to understanding recent history and the development of the Federal Republic of Germany”. Furthermore, the foundation is tasked with "collecting, maintaining and managing the estate of Theodor Heuss and evaluating it for the interests of the general public in science, education and politics."

The operational work of the foundation is headed by a full-time manager who is also a member of the board. The historian Thomas Hertfelder has been the founding managing director of the Federal President Theodor Heuss House Foundation since 1997. His deputy is the historian and head of the written archive Ernst Wolfgang Becker . The foundation has twelve employees who are supported by volunteer and student staff. 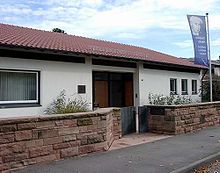 After the end of his second term as Federal President, Theodor Heuss retired to his newly built single-family home on Stuttgart's Killesberg in autumn 1959 . He lived there - his wife Elly Heuss-Knapp had died in 1952 - in an educated middle-class atmosphere, wrote his memoirs and answered large numbers of letters that reached him from the population. On December 12, 1963, the former Federal President died in his last domicile.

The foundation acquired the house in 1995 and had it redesigned into a public memorial between 1999 and 2001 on the basis of an architectural competition based on the plans of the Behnisch & Partner office . On March 8, 2002, then Federal President Johannes Rau opened the Theodor-Heuss-Haus as part of a ceremony. In October 2016, the 150,000. Welcomed visitor to the Theodor-Heuss-Haus.

On the ground floor three originally furnished living rooms (living room, study, dining room) can be viewed free of charge. On the garden level of the house, a permanent exhibition on around 200 square meters shows the life and work of Theodor Heuss and his wife Elly Heuss-Knapp. In addition to several themed tours, there is a museum educational offer, especially for schools, about which a museum educational brochure provides information.

Permanent exhibition on the garden level of the Heuss-Haus

In addition to the permanent exhibition entitled “Theodor Heuss. Publicist - Politician - President ”discusses the question of how Theodor Heuss and his wife dealt with the challenges of the age of extremes in five sections, the foundation regularly presents smaller special exhibitions on selected topics of contemporary history. Under the title “Democracy as a way of life”, the foundation has also been borrowing a touring exhibition designed by it since summer 2014 , which presents the lives of Theodor Heuss and Elly Heuss-Knapp in a color and interactive manner in a modular structure.

Every year the foundation organizes around 40 events, most of which take place in the Theodor-Heuss-Haus, including lectures, seminars, workshops, book presentations and panel discussions. Many of the events will subsequently be made available as recordings on the Foundation's YouTube channel. In its so-called priority series, the foundation deals with topics of current social and political relevance every two years. For the previous series "Model Germany", "Speeches about the Republic", "German Integration Stories", "Democracy in Crisis", "Inequalities" and "Politics as a Profession", the foundation was able to recruit prominent and internationally recognized experts, including Marianne Birthler , Peter Bofinger , Heinz Bude , Wolfgang Huber , Jürgen Kaube , Sabine Leutheusser-Schnarrenberger , Hans Leyendecker , Christian Lindner , Friedrich Merz , Rita Süssmuth , Christian Wulff and Robert Zollitsch . In the Theodor Heuss Colloquia, the foundation works together with experts in history and political science to deal with topics and questions from current research on contemporary history. The program year concludes with the Theodor Heuss Memorial Lecture, which the Foundation organizes in December in cooperation with the University of Stuttgart . Since April 2020, the foundation has started an online video format with HEUSS AKTUELL in order to continue to be digitally present on topics such as democracy and the rule of law during the closing time of the Theodor-Heuss-Haus in the Corona crisis . In the first video, Sabine Leutheusser-Schnarrenberger was asked about the question "Rule of law in a state of emergency?" and the restricted fundamental rights during the pandemic .

In order to underline the social orientation function of history as a school subject, the foundation has awarded the Theodor Heuss Student Prize since 2009. The award is given to special achievements in the subject of history that have been achieved by students from schools in Baden-Württemberg named after Theodor Heuss or Elly Heuss-Knapp. The award ceremony takes place in July before the start of the summer holidays.

Research into contemporary history is one of the foundation's central tasks. The focus is on:

The foundation documents the results of its research in publications as part of its publication series as well as in specialist journals and other media in the contemporary historical research discourse.

The foundation publishes three series of publications. In the series “Zeithistorische Impulse” (until 2016: “Scientific series of the Federal President Theodor Heuss House Foundation”) the foundation publishes the results of the Theodor Heuss Colloquia as well as monographs on contemporary historical research. The “Small Series” is aimed at a broader, historically interested public and documents selected lectures and smaller studies on contemporary history. Under the title “Theodor Heuss. Stuttgarter Ausgabe ”, the foundation publishes a scientific edition of the letters, speeches and writings of Theodor Heuss. The “Letters” series has now been completed with eight volumes that were published between 2009 and 2014 and offer an annotated selection from around 60,000 letters written by Heuss.

The foundation has a small research library in which the works by and about Theodor Heuss and Elly Heuss-Knapp are collected, as well as overview works and research on the history of the bourgeoisie, liberalism, and the political and constitutional history of Germany in the 20th century . Use of the library ( reference library ) is open to all interested parties.

The foundation collects and preserves media material on Theodor Heuss and Elly Heuss-Knapp in its image, film and sound documentation. These documents, like the units of the property depot, are digitally recorded. The written material archive makes available to its users the very extensive estate of Theodor Heuss, which is distributed across various archives, in a microfilmed form, as well as the files of the Federal President's Office from the Heuss term of office and selected journals.

Politician memorial foundations of the Federal Republic of Germany