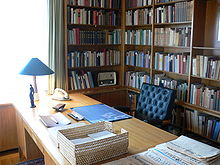 Permanent exhibition on the garden level

The Theodor-Heuss-Haus in Stuttgart , Feuerbacher Weg 46, is the former home of the first German Federal President Theodor Heuss (1884–1963). It is located in the Feuerbacher Heide on the Killesberg next to the Villa Porsche built in 1923 . The Bundespräsident-Theodor-Heuss-Haus Foundation acquired the building in 1995 and had it renovated and converted. The authentic impression was retained. Federal President Johannes Rau opened the museum on March 8, 2002.

After the end of his second term in office in 1959, Heuss retired to Stuttgart. He had a single-family house built, in which he lived until his death, received political and private visitors and wrote parts of his memoirs. He and his wife Elly Heuss-Knapp made the decision to retire in Stuttgart in the early 1950s. However, she died in 1952.

The outside of the house is not particularly representative. It is popularly called the Heuss seine Häusle . However, the house is located in the coveted Stuttgart half-height location, where the land prices have always been very high.

With the living, working and dining room, the foundation has reconstructed three rooms of the house true to the original with furniture and works of art from Heuss' property. They give an impression of Heuss' lifestyle and middle-class living around 1960.

There is an exhibition on the garden level that deals with the life and work of the journalist, writer and politician Heuss. Using around 1000 objects, originals, films and sound documents, the exhibition aims to make German history of the past century tangible through the biography of the first Federal President. Heuss' curriculum vitae is embedded in the description of four epochs of German history in the 20th century: the German Empire , the Weimar Republic , the time of National Socialism and the Federal Republic of Germany . The major turning points in German history are reflected in his life.