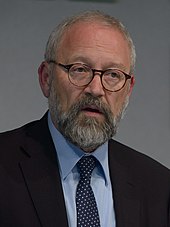 Herfried Münkler (born August 15, 1951 in Friedberg, Hessen ) is a German political scientist with a focus on political theory and the history of ideas . He taught as a full professor at the Humboldt University in Berlin . He became known for his research on Machiavelli . He retired in October 2018 .

Münkler's parents worked in school; he has two siblings. At the Augustinerschule Friedberg he took the classical language profile and graduated from high school in 1970. In his youth, Münkler was a member of the Jusos .

Münkler began studying German , political science and philosophy at the Goethe University in Frankfurt am Main , which he completed in 1977 with the first state examination for teaching at secondary schools in German and social studies. Afterwards Münkler worked on his dissertation on Machiavelli. The foundation of political thought in modern times from the crisis of the Republic of Florence , which is now considered a standard work . In 1981 he was at IRING FETSCHER Dr. phil. PhD . From 1982 he was employed as a research assistant in the Faculty of Social Sciences at Goethe University. There he completed his habilitation in 1987 with a paper on the raison d' état published by S. Fischer Verlag under the title In the Name of the State: The Justification of the Raison of State in the Early Modern Era and received the Venia Legendi for Politology. His dissertation and habilitation thesis pointed the way for his later work.

He then received a substitute professorship for political science in the same department. In March 1992, Münkler accepted a call from the Humboldt University in Berlin to the chair for Theory of Politics in the Faculty of Social Sciences. In 1992 he declined a call to the professorship for political philosophy at the University of Zurich ; In 2002 he turned down the offer of a professorship for political science at the University of Augsburg . In 1992/93 he was dean of the department and in 2002/03 director of the Institute for Social Sciences. His main research interests include a. Political theory , cultural research , history of ideas , war history , war theory, risk and security. His academic students (as of 2014) include 42 doctoral students and 18 post-doctoral students, u. a. Marcel M. Baumann , Harald Bluhm , Matthias Bohlender , Paula Diehl , Karsten Fischer , Jens Hacke , Andreas Herberg-Rothe , Bernd Ladwig , Marcus Llanque , Grit Straßenberger and Siegfried Weichlein .

From 1988 to 1999 he was responsible for political theory at the Politische Vierteljahresschrift . In 1993 he was visiting lecturer at the Institute for Advanced Studies in Vienna. In 2001 he held an academy professorship at the Berlin-Brandenburg Academy of Sciences . From 2004 to 2008 he was a member of the Collaborative Research Center 640 (“Representations of Social Orders in Transition”). In 2004/05 he was visiting professor at the Social Science Research Center in Berlin . In 2006/07 he coordinated the “Security and Risk” cluster of excellence . Since 2009 he has been part of the Collaborative Research Center 644 (“Transformations of Antiquity”). In addition, he is a member of the DFG research group “Comparative Society” and is involved in the “Theory of Political Institutions” program. In 2016/17 he was a Carl Friedrich von Siemens Fellow of the Carl Friedrich von Siemens Foundation in Munich.

Münkler was one of the experts who took part in the Review 2014 project - Foreign Policy Thinking ahead - carried out by the Federal Foreign Office . In his contribution, he emphasized that German foreign policy is oriented towards Germany's interests and less towards its values. This fact must be communicated honestly in order to reduce the “democratic vulnerability ” of German foreign policy.

Among other things, he is a series editor (“Political Ideas”) at Akademie-Verlag . Münkler has published in journals such as International Review of Sociology , Internationale Politik , Politische Vierteljahresschrift , Soziologische Revue , German Journal for Philosophy , Cologne Journal for Sociology and Social Psychology , From Politics and Contemporary History , Archives for Legal and Social Philosophy , Journal of Political Philosophy , Leviathan - Berlin journal for social science and papers for German and international politics . He was also the author of socio-political columns in the Frankfurter Rundschau .

In addition to his work on Machiavelli, the works The New Wars (2002) and Empires apply . The logic of world domination - from Ancient Rome to the United States (2005) as outstanding.

The compilation of Piper's Handbook of Political Ideas , edited with Iring Fetscher , his academic teacher, from 1985 to 1993 is considered the “ standard work on the history of ideas par excellence” ( Jürgen Hartmann and Luise Sanders ). Walter Reese-Schäfer and Samuel Salzborn described the volumes as "important" and a "very extensive overview". The work has remained "exemplary in many respects [...] and has remained unmatched to this day".

In 1993 Münkler presented an introduction to the political philosophy of Thomas Hobbes at Campus Verlag . Münkler took a "political science perspective", according to the Trier philosopher Dieter Hüning . The reviewer criticized the author for “fading out” moral and legal philosophy and “neglecting” new Anglo-Saxon research results.

Together with Marina Münkler, he wrote a renaissance lexicon , which was published in 2000 by CH Beck . In his review, the Frankfurt legal historian and philosopher Hans Erich Troje referred to Münkler as one of the “currently best recognized German Renaissance researchers” and ultimately praised the expertise of both authors. A reliable, “interesting and instructive entertainment book” was created that, although not as a “lexicon”, could function as a “reference work” via the register of persons. He also spoke of a "reading pleasure" that alleviates "anger about the fraudulent labeling carried out with the word" lexicon ".

In his book The new wars - that in the overview volume Classics of the Social Sciences. 100 key works have been included in a portrait - Münkler supports the thesis that the conventional, symmetrical wars between states have been replaced by asymmetrical wars . Three elements are essential for these new wars: the "denationalization", the "asymmetrization" and the "automation of military violence". Markus Holzinger (2011) praised Münkler's argumentative brilliance, but notes that a controversial dispute has developed in the professional world around his theses. Marked Raul Zelik the book empires as "polemic" in the Münkler "the elite that description of the world situation prompting that needs the power to exist as such and to reposition themselves." According to Helmut Fleischer narrowed Münkler " Form analysis [...] too much focus on real-situational requirements, perpetrator motivations as well as on the historical contexts ”.

John Ikenberry praises Herfrieds Münkler monograph empires (2005) as one of the "few outstanding writings" about empires. In Mitte und Maß (2010), Münkler gives an overview of Greek and Chinese antiquity as well as European Middle Ages and modernity in order to offer a recipe for moderate coexistence in the German present. Critics complain that middle and measure come closer to "journalism" due to this content overload. "So the book scratches the boundaries of the intelligent, but hopelessly overloaded feature section".

From 1991 to 1997 he was the spokesman for the “Political Theory and History of Ideas” section of the German Association for Political Sciences (DVPW). Münkler is also a member of the advisory board of the Federal Academy for Security Policy (BAKS) and the scientific advisory board of the quarterly journal for contemporary history , the yearbook Extremism & Democracy and Filosofia politica as well as the editorial board of the journal Neue Gesellschaft / Frankfurter Hefte . He was chairman of the management commissions for the Feuerbach total edition and the MEGA ( Marx-Engels total edition ) in the Berlin-Brandenburg Academy of Sciences (BBAW), of which he has been a member since 1992. He was the leader of the following working groups: “Challenges from the Foreign” (1994–1997), “Common Welfare and Common Sense” (1998–2002) and “Elite Integration” (2003–2005) and from 2003 to 2006 secretary of the social science class of the BBAW . Münkler is also a member of the Clausewitz Society and the German Society for Research into Political Thought (DGEPD). Until September 2019, he was chairman of the International Marx-Engels Foundation for 20 years . Michael Quante was elected as his successor .

In 1995 Münkler was awarded the Aby Warburg Foundation's Science Prize. In 2005 he was awarded the Philip Morris Research Prize in the field of “People and Future Worlds”. In 2009 he was awarded for his work The Germans and their myths the Leipzig Book Fair Prize in the category Non-Fiction / Essays and the Meyer-Struck Mann Prize for humanities and social science research , Faculty of Philosophy Heine University Dusseldorf for his work on the "Modern societies". For the winter semester 2012/2013 and the summer semester 2013 Münkler received the Opus Magnum scholarship from the Volkswagen and Thyssen Foundation for the project “The First World War. Great catastrophe of the 20th century or breakthrough of modernity? ”, Which is why he was released from his teaching duties in the two semesters before the publication of The Great War . In 2016, Münkler was awarded the Friedrich Schiedel Literature Prize for The Great War . His books The Germans and their Myths (1st place in April 2009), The Great War (1st place in January 2014), War Fragments (6th place in December 2015) and The New Germans (3rd place in October 2016) were on the list of Non-fiction books of the month recommended. In 2017 he became the holder of the Johannes Gutenberg Endowed Professorship for the 2018 summer semester.

Münkler's list of publications includes individual works, co-authors and co-editorships as well as articles in magazines, handbooks and encyclopedias mainly on the history of political ideas and the theory of war.