Kadaň ( German  Kaaden , Latin Civitas Cadanensis ) is a city in the Aussiger region in the Czech Republic .

Old town center on the banks of the Eger 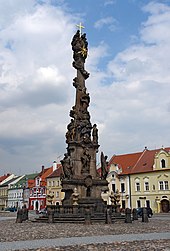 The area was already populated by different peoples in the 8th to 13th centuries BC. When Charlemagne tried to conquer Bohemia in 805, the Slavic Canburg on the Eger withstood its siege for a long time, probably today's Kadaň. The current place was probably created at the end of the 11th century. On April 23, 1186 Duke Friedrich donated the trading settlement to the Order of St. John . A few decades later, Kaaden was raised to the status of a free royal city , a royal castle was built and the Minorites built a monastery with the church of St. Michael. In 1362 the town and castle burned down.

The city ​​flourished again at the time of King Charles IV . The emperor granted it several privileges and reappointed it as a royal city. The people of Kaaden celebrate the arrival of Charles IV in the city with the Emperor's Day ( Císařský den ), which has been held annually at the end of August since 1993.

In 1534 the Treaty of Kaaden between the Habsburg Ferdinand and Duke Ulrich von Württemberg was signed in Kaaden . The city, which saw the start of the Reformation as early as 1524, lost its privileges in 1547 and suffered a lot during the Thirty Years' War .

Up until the First World War , Kaaden was a garrison of the KuK Austro-Hungarian Army .

After the First World War , Kaaden was added to the newly created Czechoslovakia in 1919 . On March 4, 1919, after the call of the regional group of social democrats on the occasion of election day for the Austrian National Assembly , the Kaaden German Bohemians demonstrated for the right to self-determination and to remain with Austria. There was a dispute with the Czech military stationed in the city. According to the Neue Zürcher Zeitung of March 7, 1919, 17 people were killed in Kaaden, 30 seriously and 80 slightly wounded. The dead were buried in an honorary grave at the cemetery; it was inaugurated again after 1989 .

According to the Munich Agreement , from 1938 to 1945 Kaaden belonged to the district of Kaaden , administrative district of Eger , in the Reichsgau Sudetenland of the German Empire .

After the end of World War II , the borders of Czechoslovakia that existed until 1938 were restored. In the following period, the assets of the German residents were confiscated based on the Beneš Decree 108 , the assets of the Evangelical Church were liquidated by Law No. 131/1948 Sb. And the Catholic city churches in Czechoslovakia were expropriated . Almost the entire population of German descent ( Sudeten Germans ) was expropriated and expelled without compensation in 1945/1946 .

Until 1945 Kaaden was mostly populated by German Bohemia , which were expelled.

360 ° panorama of the city's market square

The city of White Castle in Bavaria took over in 1955 a sponsorship for displaced Sudeten Germans .

The historic city center was declared an urban monument reserve in 1978 .