Firste , formerly also forester , is a term used in mining . In underground mining , it refers to the upper boundary surface of a bottom (horizontal) or inclined pit, generally its "ceiling". 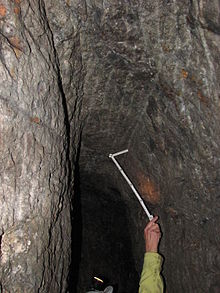 When driving up the track , the roof slopes lower despite the expansion of the track . This is known as the ridge drop and is given as a percentage of the ridge height when driving up. The lowering of the ridge is important for the deformation behavior of a plain arch after a certain support force has been reached, depending on the load-bearing capacity of the line extension. Depending on whether the expansion is early or late, the ridge depression and thus also the convergence is different in size.

In hard coal mines there is a more or less heavy deposit of fine coal in the stretches on the cap distortion . By Schleich weather currents and heat build-up can lead to a spontaneous combustion come this deposited silt. Now there is a seam in the area of the roof, this Feinkohlenglimmbrand can, especially in highly inclined or steep storage , lead to Flözbrand in the roof.