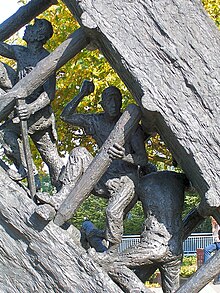 Example of steep storage based on a sculpture

Each deposit was shaped differently in the course of its formation by external influences. By tectonic processes such. B. folds or faults can previously be shifted horizontal deposits in the vertical position. As a result, brushing and falling often change within a deposit. These deformations of the deposit significantly affect the orientation , device and mining of the deposit. However, these geological disturbances are not equally pronounced in every deposit. The inclination of the deposit has an influence on the mining method to be used and the respective mining direction .

In accordance with the standard, storage is divided into four storage groups. A distinction is made in Ruhr mining between flat storage, moderately inclined storage, strongly inclined storage and steep storage. One speaks of flat storage when the inclination of the deposit with respect to the horizontal plane is between zero and 20 gon . If the incline is between 20 and 40 gons, the bearing is said to be moderately inclined. With an inclination of 40 to 60 gon, this position is called a steeply inclined position. All slopes of 60 gon and above are called steep storage. The maximum inclination can be up to 100 gon. There are both storage facilities in which all types of storage occur and storage facilities in which only shallow storage predominates. Deposits where shallow storage predominates are the hard coal deposits in the US and UK. All known storages occur in the Ruhr area. Although the share of steeply inclined and steep storage makes up almost a quarter of the deposit, the share from these deposits is only small. In salt mining z. B. in the Hanoverian Revier also dismantled in steep storage. A variant of the chamber construction , the chamber funnel construction, and the bench construction are used as mining methods. In other areas, such as the Werra-Fulda area, mining is also carried out in shallow storage using site construction.

The respective storage has an influence on the machines, tools and aids to be used. With a vertical position of a seam-like deposit, full mechanization of mining is far more difficult than with a deposit that is laid flat. Extraction machines such as the pile driver were specially developed for extraction in steeply inclined and steep locations. However, such machines cannot be used in flat storage. Additional technical requirements for the conveyor systems and extraction machines become necessary with changing incidents. In addition, the running behavior of the drives, for example in the case of the plow chain , can be impaired . Increased wear and tear and a loss of tensile force as well as increased running noise are also possible. If the longwall is used with alternating storage , the longwall is heavily stressed.