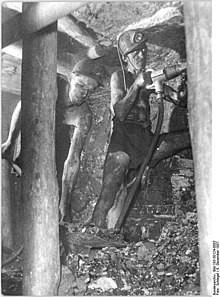 The hewer , also known as the chipper , is a job in mining and describes a miner who loosens mineral resources and rocks. The term Hauer is derived from "cut", an activity of the miners, where they by means of a pointed and sharp gezähe had cut in the rock. A miner who had successfully passed the Hauer test was later referred to as a miner .

In early mining, before he could do his job as a chipper, the miner first had to learn as a shovel boy to differentiate between ores and to separate the ore from the dead rock. Then his training continued in the pit. He first had to learn other skills as a dog pusher, that was a transport worker . Only then could he learn as a teacher the skills that he would later need as a tusker. This form of training, the acquisition of knowledge through experience, was practiced in mining until the First World War .

From the 1920s the training of the cutter was regulated by law due to union demands. Since many jobs now also required special knowledge, there were gradually craftsmen in the mines, initially locksmiths, and later also electricians. After training and passing the exam, the skilled worker first had to gain further practical experience in order to then be able to take the tusk test. This consisted of a theoretical and a practical part.

The tusk test could be taken at the earliest when they reached the age of twenty. So there were at least two years of professional experience between the squire's examination for the divorcee and the tusk examination. After passing the tusk test, the solemn absolution took place. 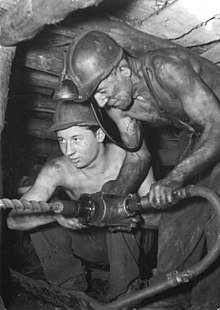 The lowest in the hierarchy of tusks was the teacher. Lehrhauer, also called Lehrhauer, were prospective not yet fully trained tusks. They were subordinate to the cutter and had to work according to the instructions of the cutter. Skilled tusks who received full wages were called full-hewn or double-hewn. In the preparation of the mine, old, former tusks supervised the divorce boys and miners. Supervisors of Hauer were the Steiger , in some mines also called Ding Hauer, or in smaller mines in the hat man . The tusker was particularly respected by the other miners in the pit, although he actually had no authority over them. The Steiger, civil servants at the beginning of the state mining industry, were later employees.

Depending on their diligence, skill and suitability, Hauer could be promoted to Hutmann or Steiger. Even an appointment as shift supervisor , mountain jury or mountain supervisor was possible. At the end of the eighteenth century, civil engineering training at a mining academy or school was required by law for mine and company officials. For this reason, the training of the Steiger could no longer take place via in-company training.

Hauer, who possessed many years of professional practice, which also had the ability to lead people and enough mining and technical skills, had to have supervision Hauer or upper tusks are transported. However, they were not supervisors in the sense of mining law, but had the function of a foreman.

If a hammer had particularly proven itself in its function, he was appointed a master hammer . His job was to provide technical training for the next generation of miners. The master carvers were specially trained for this task in a preparatory course, which ended with an in-house examination. Master carvers were reported to the mining authority. In the GDR there was the honorary title of “ master craftsman ” as a state award.

If a particularly experienced contractor worked underground for more than 10 years and was at least 35 years old, he could be appointed as a driver if he was qualified . He had to be suitable both personally and professionally. The technical suitability was proven in a so-called driver's course, which was considered a certificate of proficiency. Drivers are responsible persons within the meaning of the Federal Mining Act and received an order letter.

The working hours of the tusks differed from region to region and were between 10 and 12 hours, but the time for driving was not included. For a week of memorial work , a tusker received just 18 Mariengroschen in 1617 . At the time, you couldn't even buy a pound of butter for that weekly wage . Until the beginning of the 1950s there was a 5-1 / 2-day week with 50 hours, with breaks on the 5 days; today the tusker works 7 hours a day without opening.

While in the early days of mining the actual work of the cutter was very diverse and not only consisted of extracting the ore, over time the work of the respective cutter specialized. So there were drill tusks, gang tusks, bench tusks, chisel tusks and carpenters.

Drill tusks were responsible for drilling and shooting. They had to drill shooting holes in the rock to a certain depth. To do this, they used drill rods which they drove into the rock by hand with a hammer.

The Ganghauer, also called Gänghauer or Gänghäuer, used to be a Hauer who had to win the ore veins in . There were also earlier mountain areas in which the Ganghäuer was a Hauer who owned a mountain loan or parts of a mountain loan and then had to work independently on it. Later the term Gänghäuer was used for a subordinate overseer. The Gänghäuer was hierarchically between the double tusk and the descender. He had to give instructions to the miners and to assign the tusks their respective work. He also had to distribute the gunpowder and supervise the endurance of the ores.

The Strossenhauer was a tusker whose job it was to tear down strokes.

The Schrämmhauer, also called Schrämhauer, or Schramhauer, was a Hauer whose task was the Schrämmhauer . The Schramhauer cut a scrape into the rock using a skewer . They then cut further slits in the rock, all of which were exactly the same depth as the scratch.

Carpenters, also known as carpenters or woodworkers, were carpenters who were mainly trained in the construction of pit rooms . Their job was to make the pit room.

After payment one differentiated:

The Gedingehauer (Gedingehäuer) mined the ore in certain pit sections for a fixed amount. The men’s tusks worked on a weekly basis for the mine owner, the mine owner. The Lehnhauer acquired the prospecting right in a certain section of the mine for a certain period of time. They then sold the ore they won to the trades .

In today's modern mining industry, the craft of the cutter has become even more specialized. In the mining sector, a distinction is made among other things:

For the promotion to the Hauer, a Hauer examination is no longer required, but the passed skilled worker examination and a certain professional experience. In addition to the mining sector, there are also electric contractors and machinists.