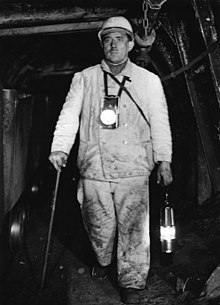 Steiger in the Ruhr mining industry

The Steiger is a supervisor in the mining industry . He is responsible for part of the mine and the people under him. The name is derived from the former activity of the climber, the constant climbing and driving into the pits. The Steiger is sung about in a popular miner's song , the Steigerlied ( Glück auf, Glück auf, der Steiger is coming ).

The lowest level of the hierarchy were the descenders. They only acted as supervision for a small sub-area. The mobile climber, who was subordinate to several climbers, stood above the simple pit climber. The top in the hierarchy was the top climber, he was the first overseer and officiant at the mine. All workers and mining officials at the mine were subordinate to him. Some mines had a pit climber and a day climber. The pit climber had the work and facilities in the pit under himself, the day climber had the daytime facilities , especially the processing , under himself. The head climber formed the mine administration together with the shift supervisor.

The Steiger had to meet certain professional requirements to carry out his activities. Since there was a lot of work with wood in mining , a prerequisite for the Steiger was that he had knowledge of woodworking. This was necessary so that he could check all types of pit room during his visits and repair them if necessary. In addition, he had to have knowledge of mountain science, ore and rock science and mineral processing. To meet these requirements, many years practical mining training was first necessary that the mountain servant began as unterster stage. Successful attendance at a mountain school was then a prerequisite for further advancement. Only miners who were employed by a mine and who had already exceeded the lower work levels were admitted to the mountain school . Successful attendance at the Bergakademie was required in order to hold the position of a mountain officer such as the Obersteiger .

In addition to technical suitability, various other requirements were also placed on the Steiger. He had to behave with due respect towards his superiors and the mine manager . He had to lead a Christian, sober and decent way of life and thus be a good example to his subordinates. He had to behave politely towards his fellow Steigers. He had to be polite to the landowners. He had to obey the authorities in charge of him. He also had to wear a proper mining costume . Furthermore, the Steiger was not allowed to be the brother or cousin of the shift supervisor of the mine where he was employed.

Due to the large number of different jobs, it was necessary, especially in the larger mines, for the climbers to specialize according to their knowledge. According to the Steigerwald in need of supervision miners example, there was room Steiger , Art Steiger and wall Steiger . There were also special names for the climbers who supervised other activities. So there was the pit bank the pit bank Steiger , these oversaw the reel puller and the miners who had wegladen the overthrown mineral mountains. For the night shift there was often a Steiger who had to supervise all the work that had to be done at night; he was called a night shift worker . For overseeing the vagina boys there was the boy Steiger , even vagina Steiger called. He had to encourage the divorce boys to do proper divorce work and severely punish them if they had made serious mistakes.

The Steiger had to supervise the subordinate miners. He had to instruct the miners in their work and ensure that there was enough material for the operation. For Steiger, the working day began before the actual working hours began. Early in the morning he had to attend the miners' early prayer in the prayer house and check their attendance. He had to make sure that the miners wore the prescribed miner's costume . Then he went into the pit to the jobs sail . He had to report special incidents to the manager after the shift. The working time was usually twelve hours and usually only ended at 4 p.m. in the afternoon. On the weekends he did not have to stay twelve hours in the mine, but had to check that all miners had left the mine. He also had to arrange the miners' working hours on weekends so that they could go to church on Sunday. The miners worked eight hours on weekends. If a Steiger could not do a shift for compelling reasons or if he had to end the shift prematurely for certain reasons, he had to obtain permission from his superior beforehand.

In addition to his supervision, the Steiger also had to do written work, for example keeping the operating and shift logs, as well as preparing the monthly operating reports, preparing the criminal records and the rifle slips. The tasks and working hours hardly changed until the middle of the 20th century. Even in 1957, the daily working time of a climber was often up to eleven hours. The working day began at 5.30 a.m. with the morning meeting and ended with the afternoon meeting with the Obersteiger and the operations manager at 4 p.m., with around 7.5 hours of working time underground in between.

Although the Steigers were civil servants, the mine owners were responsible for their remuneration . Since the Steiger's wages were determined by the trades , it varied depending on the mountain area . For example, the Steiger received a weekly wage of six talers and nine silver groschen in the Hetton mine. The wages of the grader were just as high as that of a carpenter. For the sale of the lights and the lamp oil they received a small commission. As a result, their weekly wages rose to twelve talers, seven silver groschen and six pfennigs. During the shelf mining , however, the Steiger enjoyed the same privileges as the other miners. In the mountainous areas of the county of Mark and the Duchy of Cleve, the Steigern were forbidden to eat workers and tusks in order to supplement their wages. The mining regulations stated: “Shift supervisors, foremen and workers should be content with their set wages…” () In the mountain areas of Saxony it was state regulated that the wages of the climbers had to be consistently high at all mines. As a result, the mine owners divided the wages of the climbers and miners into certain wage levels. The remuneration was in the form of things or a fixed wage.

In the first half of the 20th century there was another change in the status of the Steigern. Due to a change in the law, Steiger were no longer civil servants, but instead became employees. From now on, the mine owners could employ and fire Steiger. The changes had to be communicated to the mining authority. With the entry into force of the Federal Mining Act in 1980, a lot has changed for the Steiger. It no longer speaks of increaseers, but of responsible persons . Responsible persons within the meaning of the law are all persons appointed to manage and supervise the company. Persons who are used as responsible persons must be reported (appointed) in writing to the mining authority by the entrepreneur. If they are recalled, this must also be reported to the mining authority in writing.

The lowest level of the hierarchy in today's mining is the shift climber. He leads an operational shift in a district. Between three and eight shift climbers report to a district climber. The movers stand above the Reviersteigern. A driver is the head of a driving department that includes one to three areas. Thus, between one and three district climbers and three to twenty-four shift climbers are subordinate to the driver. The top climber stands above the moving walkways, he is the deputy of the operations manager and reports directly to him. Between one and three movers and the respective movers report to the upper climber and shift climbers. Thus, in addition to the moving walkers, an upper climber can report up to nine district climbers and up to 72 shift climbers, depending on the size of the mine. Depending on its size, five or more top climbers can work on a mine.

The requirements are regulated in Section 59 of the Federal Mining Act. Responsible persons must have the necessary specialist knowledge. They must also be physically fit for the job and have the required reliability. In order to prove the necessary specialist knowledge as a prerequisite for the activity as a climber, the successful attendance of a mountain technical school (technical school) , a mountain school (technical school) or a study at a technical university as well as the appointment as a supervisor by a mining authority is required.

At the mine, mine workers are responsible for ensuring that the mining work in their area of ​​responsibility of the mine operation can be carried out properly and without disruption. Weather enhancers are responsible for mine ventilation . Only people who have successfully completed an apprenticeship at a mountain technical school or an advanced mining training facility are appointed as weather climbers. You must complete additional training to become a weather climber. Electric climbers are responsible for the electrical systems at the mine, for their operational readiness and safety above or below ground. They check whether maintenance and repair work has been carried out properly. Machine assistants are responsible for the functioning of the machines and devices and, if necessary to avoid accidents, arrange for them to be shut down.

The tasks of the Steiger changed drastically with the entry into force of the General Federal Mining Ordinance in 1995. According to this ordinance, it is no longer the main task of the Steiger to watch over operational matters, but to ensure the work safety of the employees under them. Since the entrepreneur can transfer the duties to the responsible persons, the Steiger as responsible persons are primarily responsible to ensure the protection of the employees from danger. Each climber has to drive twice a day to the operating areas and workplaces assigned to him where his employees are employed during the shift and once a day for non-hazardous work. A telephone call with the employees at the respective workplace is also considered a second visit. Due to the Working Hours Act , the daily working hours have also been reduced for the Steiger. Steiger can only be employed for eight hours a day and in exceptional cases a maximum of 10 hours. In some mining areas, the Climate Mining Ordinance comes into effect due to the high underground temperatures. The reductions in employment times that apply here also apply to Steiger, so that Steiger who work in climatic areas have a working time of seven to eight hours.