Mine separators when pulling underground

The Markscheider is a surveying engineer who specializes in mining . He either works as a freelance professional or is employed by a mining company. After completing his studies, he passed two state examinations and must be state-recognized in order to be able to perform the duties assigned to him by law ( Federal Mining Act, BBergG). The Markscheider is responsible for the collection, evaluation and provision of mining-related geographic information as well as its cracked or cartographic representation. With this data he works on issues of the most diverse areas such as deposit management, mining planning, approval procedures, spatial planning, regional planning, mining effects in the mountains and on the surface as well as damage to the mountains. Since the Middle Ages , the mine digger was an official who had to determine the mine sheath of a mine and put down his findings, in particular with regard to the deposit with all fissures and passages as well as the mine workings in the crack work . In the Bavarian-Austrian area, the Markscheider is also called a carpenter or Schinmeister .

The name Markscheider is derived from the two terms Mark and Scheiden . Mark is used here in the sense of border . The measurement ( cutting in the sense of separating ) of the property boundaries is referred to as marrow cutting .

The opencast mines in the Mark were also measured. With the appearance of the first ore mines, not only the length fields but also the underground mines had to be measured. In order to avoid driving over the mine sheath and thus violating neighborhood rights, the mine separator established the underground and surface ownership boundaries, he separated the brands . According to the Freiberg mining law, only the mine separators were authorized to do this. Since they were officially appointed experts, their measurement results and records had the character of a document. The documents drawn up by the Markscheider within the scope of his powers according to §§ 63, 64 BBergG still enjoy public faith today (§ 64 Paragraph 2 SDatz BBergG) and thus facilitate the evidence in processes for the enforcement of claims for damages as a result of mining damage.

As early as the end of the Middle Ages, the position of the Markscheider was determined by laws. In the Bergordnung Maximilian I from the year 1517 it was already regulated that the miner was taken under oath for his work. In Saxony, the mine separator was placed under state supervision. In the 18th and 19th centuries, Markscheider occupied an important position in the hierarchy of the mining industry . Markscheider or Landesmarkscheider were appointed to the Austrian mountain courts and had the task of deciding on border disputes. In Germany, Section 64 of the Federal Mining Act is authoritative, supplemented by federal ordinances and numerous state laws and ordinances. 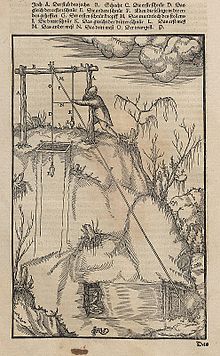 In early mining, the miner took on the first mining activities, measuring the treasure pits and length fields. The first mountain regulations regulated the mining tasks, mainly the so-called mountain surveying and the guiding of cracks. These tasks were no longer taken over by the mountain master, but by an official subordinate to him, the mine surveyor.

In the course of industrialization , these classic tasks were supplemented primarily with the processing of deposits, the associated mining damage research and the supervision of the mining permit procedures. The Markscheider u. a. with the help of geographic information systems (GIS).

In Germany, according to the Federal Mining Act, a sketch work consisting of true-to-scale maps, plans and other documents (including handbooks) must be kept. In addition - also under the responsibility of the surveyor - additional operational documents are created for the mine, for example cutting plans and operational point plans.

In recent years, the assessment of the impact of mining on the surface has become increasingly important. With the help of simulation programs, the Markscheider makes forecasts about the expected effects of the mining.

The mine separator is the point of contact for companies and homeowners and landowners who have been damaged by the mining industry on issues relating to mining and mining damage. 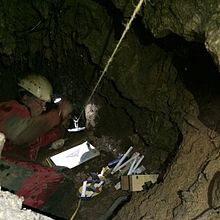 The Markscheider's measuring instruments in the Middle Ages were primarily the hanging equipment (Schinzeug), consisting of plumb bob , degree curve and hanging compass - or setting compass as well as the laughing chain , the forerunner of the tape measure .

A train to pull a cord was taut from point to point. The cord was attached to special nails, which ensured a defined position of the cord (ridge nails). The degree bow and compass were hung on the string. The inclination towards the horizon was determined with the degree arc and the direction towards magnetic north was determined with the compass. Then the distance between the individual points was determined with the laughing chain. In order not to influence the compass, all measuring instruments were made iron-free, and the Markscheider himself and his assistants were not allowed to have anything iron on them. This necessity also explains the use of special miner's lamps , the Markscheider lamps .

In individual cases, graphic recordings were made with a measuring table and tilting rule .

Leveling was carried out with a hose level , which is still used in mining today, as there is sometimes no line of sight between the height points to be leveled - a prerequisite for using a level .

In the 20th century the measuring chain gradually came out of use and was replaced by steel measuring tapes that were now available.

In the second half of the 20th century, the electro-optical distance measurement, as in other surveying, was introduced.

While in the surface area of ​​the Markscheider today the most modern measuring technology such. B. can use total stations , GNSS measurements and photogrammetry , he is still partially dependent on optical-mechanical theodolites and tape measure measurements underground. Especially in firedamp pits (i.e. in almost all hard coal mines ), due to the risk of explosion, neither total stations with electro-optical distance measurement nor laser rangefinders can be used. However, as early as the mid-1970s, Zeiss' Eldi 2 mining was developed, a firedamp- proof electro-optical distance meter . A special explosion- protected or intrinsically safe laser scanner , the Imager 5006Ex, has recently become available.

In the cave surveying is still with today hanging stuff worked, because the cramped conditions often do not allow large-sensitive devices.

Historic Markscheider's instruments after De re metallica 1556 by Georgius Agricola