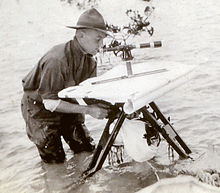 Surveyor at work with a measuring table with a tilt rule

A measuring table is a (historical) tool used by the geodesist or topographer when surveying the terrain for the production of cadastral or site plans using the graphic / drawing method. It is made of wood with exactly planar and distortion-free surface and can be set via dragonfly level up . The size is typically 40 cm × 40 cm - 60 cm × 60 cm.

Johannes Praetorius (1537-1616) is considered to be the inventor of the measuring table, the so-called Mensel (Mensula Praetoriana), which is attested by his student Daniel Schwenter .

For the purpose of angle measurement, the measuring table was screwed onto a three-legged measuring stand, which was set up centrally over a measuring point . The recording sheet , a drawing sheet or a map to be updated (also called mapping ) was attached to the wooden plate . The orientation of the measuring table was made depending on the purpose of the recording to the north, south or a preferred direction in the landscape (e.g. valley course). For orientation to geographic north, see orientation (map) .

The most important tools on the measuring table were:

After completing the measurements, the mapping with the recorded detail and boundary points was drawn in the office. The measuring table also gives its name to the measuring table sheet . For small operations , instead of surveying points, initially unknown locations were used, the mutual position of which was determined by graphic triangulation .

Similar instruments are still occasionally used for simple measurements. The graphical method has the advantage of doing without calculations in the small area.