The tripod ( Latin stativus, -a, -um 'fixed') is used to set up cameras, lights, microphones, laboratory equipment or measuring instruments.

As a rule, a tripod has three support legs which, as telescopic legs, are often variable in length. They consist mainly of metal or wood. Small tripods for small cameras or smartphones are mostly made of plastic, especially their flexible legs. The part to be set up is attached to the tripod head.

In laboratories and in chemistry and physics classes , the part to be set up is attached to a stand rod (or a stand frame). The stand rod is connected to a base plate or it is inserted into a separate stand base.

Surveying tripod with attached "stand" for leveling and measuring device

Some surveying tripods (including tripods ) made of lacquered or plastic-coated wood are particularly robust and stable . You can carry weights kg to 20 and get over yet so little that measurement accuracies up to an arcsecond (1 ") are possible.

The massive tripod head (mostly made of cast aluminum ) with its circular opening 6 to 8 cm in diameter is characteristic of surveying tripods . The measuring instrument is clamped over it from below with the so-called heart screw . This strong screw is hollow so that an optical or laser plummet can aim through it to the ground. The tripod head itself is rigid, centering over the measurement point is done with the plumb line or, with older measuring devices, with a plumb line by slightly shifting the theodolite before the heart screw is firmly tightened. The adjusting screws for leveling the measuring device are integrated in the device itself or in its own base plate. 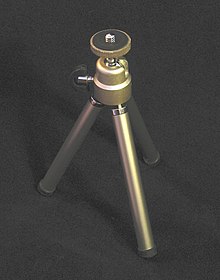 In the case of photo tripods, a compromise is often made compared to survey tripods. While absolute stability is important for surveying tripods, handiness, versatility and weight are important for photo tripods. Photo tripods are therefore usually lighter than survey tripods, but they are also much more unstable. In addition, they often have an extendable center column, by means of which the shooting position can be increased even further, whereby the stability is often drastically reduced. With some tripods, the center column can also be mounted the other way round, which enables extremely low shooting positions.

With very long focal lengths , the risk of blurring is particularly great due to the small angle of view , so that a tripod is (almost) indispensable here.

In view of the high packing density ( pixel pitch ) of image sensors in digital cameras, the tripod takes on a new role in terms of creating a high image sharpness, since the low pixel pitch causes blurring much earlier (see rule of thumb for the "freehand limit") leads.

In addition, the tripod allows more careful camera alignment and composition. With the help of a tripod, the aperture can also be closed further, which usually leads to a better sharpness of the lens. The focusing screen setting, which is often used in large format cameras , requires the use of a tripod. There are some alternatives to avoid camera shake, but they cannot always replace a tripod.

Photo tripods are also used to support the weight of a heavy camera. This is important in nature photography , for example, in which you point the camera at a bird's nest in order to wait for the right moment. Large and heavy telephoto lenses in particular have their own connections for mounting on tripods.

The most common designs for photo tripods are:

Special forms of tripods are:

Between the tripod and the camera there is usually a tripod head which enables the camera to be moved or aligned. This can be a ball head (also: "ball joint head"), a three-way head or a gear head . Special tripod heads are panoramic heads for receiving panoramic images of a plurality of frames and Tele Eiger for action shots with long telephoto lenses. In order to line up the individual images precisely, panorama heads usually have graduations and spirit levels for each axis of rotation ( vials ). If different cameras are used with the same tripod, it is helpful to equip the tripod head with a quick-release plate. 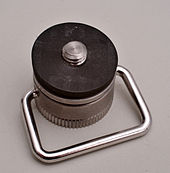 DIN 4503 tripod thread on a screw for camera strap

The screw thread for the device to be held is called the tripod thread . For historical reasons, many tripod connections do not have a metric ISO thread , but an inch thread in the sizes 1/4 "and 3/8". While the British standard BSW ( Whitworth thread ) with a flank angle of 55 ° was often used in the past , the American standard UNC with a 60 ° flank angle is used today. Since the pitch and diameter of BSW and UNC are the same and only the flank angles vary, old and new systems usually fit together without major difficulties. The ISO 1222 (formerly DIN 4503 ) deals with tripod connections for cameras and accessories, including any anti-rotation devices.

Film and video camera tripods (hereinafter: tripods) have the task of holding the camera at a certain height and allow it to pan and tilt in any direction. Rotating the camera into portrait format, which is often made possible by an additional joint on photo tripods, is not provided for with video tripods. Normal tripods are used, which are also used in photography, as well as special dolly tripods, which are mainly used in the film sector to carry out camera movements in a stable manner.

Tripod legs consist of an extendable construction that allows height adjustment. Particular importance is attached to stability, freedom from torsion and vibration. The first tripod legs were made of lacquered wood. Wooden tripods were mainly used up to about 40 years ago and were initially replaced by tubular structures made of steel and later made of aluminum alloy, so that wooden tripods are only less common today. Today, carbon fiber reinforced plastic pipes are mostly used. Stainless steel thorns on the legs ensure the necessary stability on the ground. Depending on the nature of the ground, there are also ground spiders, roller spiders or tripod shoes to protect the ground and ensure a firm hold. Tripod legs are available in different sizes, which allow height adjustments from approx. 50 to 200 cm lens height.

The tripod connection is available in various standards. This enables the assembly of different swivel heads (independent of manufacturer).

In the amateur area, plates on a center column, like photo tripods, which are guided through an opening in the tripod connection, are common. Tripods with spherical shells are more professional. Ball sockets are available in different sizes (e.g. with diameters of 75 mm, 100 mm or 150 mm). The spherical shell enables quick and easy horizontal alignment of the tripod head, as it can be swiveled back and forth after loosening a clamping device in the spherical shell. This design is particularly important for film and video tripods, since exactly horizontal panning and vertical tilting are only possible with a horizontal alignment of the head at its base. Plates with a central column usually come from the area of ​​the photo tripods.

Another popular tripod connector is the Mitchell flat base for larger tripod heads or for heavy cameras. Here, the horizontal alignment is carried out with the tripod leg height adjustment or a separate screw adjustment element.

Pan heads are mechanical units that, mounted on two axes, allow the camera to tilt and pan. The swivel heads of film and video tripods are provided with damping in both directions in order to compensate for the inaccuracy of the human arm and to lend a dynamic of acceleration and deceleration. This damping can be adjusted depending on the type of movement, the weight of the camera and the focal length. Pure photo tripod heads do not require attenuation, as no movements are made during the recording.

There are four types of swivel heads based on damping:

Friction heads use the surface friction of grease-lubricated metal disks stacked close together.

The gyro head is a swivel head mechanically stabilized by means of a gyro, which today has only historical significance. In 1958, however, Wendelin Sachtler caused a sensation with this invention: gears were used to drive flywheels at a relatively high speed due to the swivel head movement in both directions, which (similar to the other way around in toy cars with flywheel drive ) ensured that the original swivel head movement was dampened.

The head is moved by two hand cranks, where the crank itself acts like a flywheel. There are two types of crank heads, which differ in the power transmission to the camera. It can be done via worm drive or toothed belt (with older models with wire rope).

An important property of the swivel heads is the maximum load capacity. Tripod heads for camera systems (i.e. camera and lens ) from 500 g to approx. 50 kg are built. The rule of thumb is to use a tripod head with the next higher load rating.

The most common heads are the fluid and friction heads, which are made in all sizes and are sometimes confused with one another because of similarity. It is possible to mount swivel heads not only on tripod legs, but also on camera trolleys (dolly), on special brackets such as B. to attach car mounts, helicopter mounts or camera cranes with the appropriate tripod connection.

Copy stands are used to reproduce all kinds of originals. These can be documents, pictures, slides or smaller objects. A copy stand consists of a base plate, a stand column and the stand arm. The height adjustment is usually possible with a crank. At least four lamps are also required for shadow-free lighting. In conjunction with a light panel, lighting from below is also possible.

In addition to the classic design of the copy tripods with a stable column, the camera manufacturers also made special tripods that were adapted to the respective camera model and known in German-speaking countries as rod- type devices. They consist of a holding plate and four length-adjustable rods. The mounting plate is attached to the filter mount on SLR cameras; in viewfinder cameras it is mounted between the lens and the camera. A fixed extension is also provided for viewfinder cameras. The sticks have markings for the DIN formats in order to enable fixed image scales for re-enlargements. Before the spread of photocopiers and digitization, this was the only practicable way of reproducing present copies and incunabula in libraries. The chopstick devices are light and small and much easier to transport than conventional copy stands.

In laboratories , especially chemistry laboratories , but also for teaching purposes e.g. B. in physics classes , equipment with free-standing or wall-mounted tripods or tripod frames are attached. Various stand clamps and sleeves are used for fastening to the rods or frames . With free-standing laboratory stands, the stand rod is screwed into a base plate or clamped into a stand base.