The Whitworth thread , also known as the inch thread , is named after Sir Joseph Whitworth who introduced it in 1841. It became the world's first standardized thread . In Germany this thread was standardized as DIN 11 and DIN 12 for a long time . It is still used today as British Standard Whitworth (BSW) and British Standard Fine (BSF) in Great Britain and as British standard pipe thread (BSP ) also in mainland Europe. In Germany it is still used as a pipe thread . 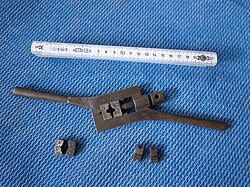 The Whitworth screw thread is the counterpart to the pointed thread for short, known as the metric thread. Both contain their outer diameter in the abbreviations: 1 ⁄ 4 ″ (inch thread, corresponds to 6.35 mm outer diameter) or M6 (metric thread, 6 mm outer diameter). In contrast to the pitch per revolution of the metric thread, the pitch is specified as the number of turns per inch of thread length: 1 ⁄ 4 "- 20 turns per inch (corresponds to 1.27 mm pitch); M6 (x1) - 1 mm pitch. Whitworth pointed thread has a 55 ° flank angle , metric 60 °.

The British standard of the Whitworth thread knows the types BSW (regular thread) and BSF ( fine thread ). For screws with an outside diameter of less than a quarter of an inch, it has been supplemented by the British Association Screw Thread .

In sound engineering, for example, a 3 ⁄ 8- inch BSW thread is used to screw microphone stands .

The Whitworth pipe thread is intended for screwing pipes (water, oil, gas, compressed air) and matching connecting parts ( fittings ). In sanitary , heating and air conditioning technology , it is usually cut as a conical thread on medium-weight and heavy threaded pipes according to DIN EN 10255 ( formerly DIN 2440, 2441 and 2442 ), which are available up to a size of 6 inches (DN 150) , from a size of 2 inches but are used less often than the preferred flange connections .

A distinction is made between tapered and cylindrical versions of Whitworth threads:

Origin of the customs declaration

Manufacturers of fittings and pipe fittings use the code letters listed below to indicate the intended pipe connections:

Depending on the air flow, the different sizes up to G3 ″ are used.

In Europe, the (internal) thread G 5 ⁄ 8 ″ is used for compressed air in diving cylinder valves . In Germany, the M26x2 thread is required for Nitrox and Trimix fillings above 21% oxygen (O 2 ) - in practice, however, G 5 ⁄ 8 ″ is often used. Life-threatening mix-ups cannot be ruled out, the operator is liable in the event of damage .

Liquid coolers for power semiconductors, high-performance laser diodes or computer water cooling systems and their water / air heat exchangers use both conical and cylindrical Whitworth pipe threads. In Germany the G 1 ⁄ 4 ″ and the G 1 ⁄ 8 ″ thread are the most common, u. a. for computer cooling. In other countries, G 3 ⁄ 8 ″ or - especially in American countries - the local NPT thread (NPT: National Pipe Thread - US thread standard for pipe fittings) prevail.

The table for tapered R threads is identical, with the difference that it has a taper ratio of 1:16.

a Complete designations are given in the relevant standards listed in the table.