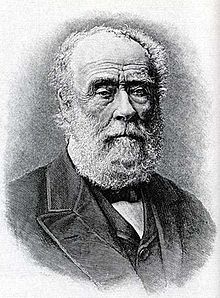 Sir Joseph Whitworth, 1st Baronet (born December 21, 1803 in Stockport , † January 22, 1887 in Monte Carlo ) was a British engineer and is known for his pioneering work in moving away from artisanal manufacturing methods to replacement construction . This created the basis for industrial large-scale and mass production.

Whitworth only attended school until he was fourteen. After working years in his uncle's cotton mill and working as a mechanic in Manchester, he worked for a total of eight years in London for Maudslay , Holtzapffel and Clement . In 1834 he started his own repair shop in Birmingham.

Whitworth dealt in particular with measurement technology and the fastening threads. One of the thread forms standardized today was named after him as the Whitworth thread . In addition, Henry Maudslay's pupil gained worldwide recognition with constructive improvements to the lathes of the time . So he introduced the hollow casting and the automatic face pull on the support. He also shortened the main time in 1849 with the so-called multi-cut bench, in which several turning tools machine a workpiece at the same time, and improved it to the multi-steel copying lathe for the manufacture of guns and rifles. He built his first planing machine in 1835 , but the improvements over other models were minor. In the same year he had a milling machine patented that had steam-operated individual drives and became a model for later decades. As early as 1837 Whitworth was using round gauges with fixed oversize and undersize for the fit and manufactured caliber gauges and ring gauges with fine gradations. These normal teachings soon found widespread use.

To improve the shooting performance of firearms, Joseph Whitworth proposed the principle of polygonal barrel to the British Army in 1853 ; instead of fields and trains, the bullet should be set in rotation by the polygonal inner profile of the barrel. The UK procurement authority declined. However, polygon barrel infantry rifles were later used with success by the Whitworth Sharpshooters in the American Civil War .

Whitworth also used the polygon course he developed in gun construction, but this did not prevail in the long term. His closing system with external attached screw closure was compared to the still used screw closure of William George Armstrong no chance.

An important contribution from Whitworth to industrial manufacturing technology was the enforcement of standardization . Already in the eighteenth century by the French gunsmith Honoré Blanc , it was introduced in the weapon industry, it reduces manufacturing costs and allows the replacement of defective components on industrially manufactured devices without reworking.

In the case of replacement construction, the individual parts are no longer fitted to one another in a trying relationship to the neighboring components as in the manual method, but individually manufactured according to drawings with dimensions and technical tolerances , possibly even without knowledge of the neighboring parts. Instead of the specific part, a similar part manufactured according to the same drawing can therefore also be assembled. This enables more efficient industrial production and assembly . However, it depends on a precise description of the part properties in the form of drawings and parts lists, on the accuracy and quality of the machining processes and machines, and on the qualifications of the people involved in the manufacturing process and the tests.

On November 1, 1869, he was given the hereditary title of Baronet , of The Firs in the County of Lancaster . Since he had no sons, the title expired on his death in 1887.