The sea ​​fennel ( Crithmum maritimum ) is a species of the genus Crithmum within the umbelliferae family (Apiaceae). Their use has been known since ancient times . It resembles wild fennel , hence the common name sea fennel ; other common German names are sea ​​fennel or bacilli herb . It thrives on rocky coasts in the area of ​​the spray . 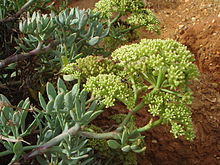 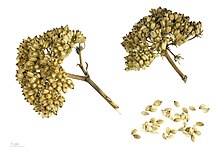 The sea fennel is a perennial herbaceous plant that reaches heights of 10 to 50 centimeters. The stems of the sea fennel are the same color as the flowers and are woody at the bottom.

The alternately arranged leaves are one to two pinnate, succulent , up to 7 centimeters long and colored blue-green.

The flowering period extends from June to October. Many flowers are densely arranged in double-gold inflorescences up to 80 millimeters in size and consisting of 8 to 36 rays. The flowers are pale yellow in color. The ribbed fruits are egg-shaped with a length of up to 6 millimeters.

The sea fennel can tolerate contact with salty spray water well, depending on its location close to the sea. A single plant found on the dune island near Helgoland in 1935 proved to be inconsistent; the occurrence found in 2001 on Heligoland itself can now be regarded as established.

The medicinal and culinary usefulness of sea fennel has been known at least since ancient times. It is assumed that this was the case even before the beginning of the written tradition . Sea fennel in particular was brought along for food by seafarers . It was suitable due to its frequency near the coast and the preventive effect against scurvy resulting from the high vitamin C content .

The sea fennel can be grown in gardens despite its relatively limited natural habitat. As long as there is sufficient drought and there is no standing water, the plant can thrive on numerous soils. However, the sea fennel is only partially frost-hardy and therefore needs special protection, especially outdoors in winter. A sunny to full sun location is essential for the plant to grow. The plant can easily be propagated by sowing or dividing in spring or autumn. With regard to aesthetic aspects, Seán O'Hara from gardening in mediterranean climates worldwide writes that the sea fennel is “handsome” and contrasts “pretty with numerous plants”. Furthermore, the added edibility makes it even more worthwhile to plant sea fennel.

The sea fennel leaves are occasionally made into salads or used as a spice.

The inconspicuous sea fennel, called fonoll marí in Mallorqui , is still an aromatic side dish to Mallorcan cuisine . After being picked, it is washed and pickled in vinegar. Marinated sea fennel is a common ingredient in typical rice dishes such as arròs brut or pa amb oli (bread with olive oil and tomatoes). But fonoll marí is also very popular as pickled pickles and is an alternative to Mallorcan capers .

The sea fennel has a special place in the Italian South Apulia, the Salento . The finocchio marino (or critimi ) is boiled in vinegar and marinated in olive oil with garlic and peppermint. It is served as a starter or in salads.

On the Greek Aegean Islands , where the herb is called κρίταμο (krítamo) based on its botanical name , it is used as an addition to salads and other Mediterranean starters. The herb with the rather exotic note is placed in salt / vinegar water and dosed rather sparingly because of its distinctive taste. You can prepare it fresh by boiling it briefly, or you can put it in and make it durable in this way.

Common English names are samphire or rock samphire - hence Samphire Hoe, near Dover, got its name.