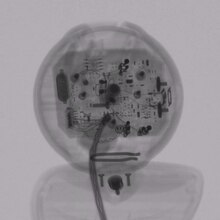 Play media file
Animated set of X-ray images from the Logitech C500 webcam. The glass lens is visible in front of the chip.

A webcam or web camera is a camera that takes pictures at short intervals, mostly outside of buildings, which are then publicly available on a website. It is also used to describe a simple camera that transmits video images from a person for video chat or video telephony. For this purpose, the webcam is connected to the computer via USB and is usually aimed at the user. In laptops, the webcam is usually installed above the screen. Classic webcams are increasingly being replaced by front cameras in smartphones and tablet computers .

The term webcam goes back to websites that offer regularly updated images. With many webcams, the image is only updated at longer intervals (e.g. every 15 minutes); some webcams actually offer some kind of live stream. Webcams are often offered by companies, public institutions or now also private individuals who have a fast and constantly available Internet connection. In the 1990s, only dedicated lines were considered for this ; Since then, however, a DSL connection has also been sufficient . The motives for operating a webcam are different: from pure hobby practice (e.g. for chatting in web chats ), exhibitionism, advertising to purely financial interests. The most varied of contents are presented: public places, office workplaces, private apartments, sexual acts, construction sites and much more.

The technology is now inexpensive and widespread worldwide. This allows insights into the private lives of people who are often monitored around the clock by a webcam ( voyeurism , exhibitionism ). In addition to this purpose, webcams can also be used as surveillance cameras . Commercial users also benefit from the range of webcams: In addition to providing paid webcams (e.g. with pornographic content), they can be used for marketing . The tourism industry is increasingly using webcams to show potential customers an up-to-date picture of the holiday destination. Webcam Models on websites with pornographic content are also called Camgirl designated or Camboy. Virtual sexual exchange through technologies like the webcam is also called cybersex .

Webcams are also used for remote body measurements, with which the body size of an interested party is recorded and then a purchase recommendation is given. This is to simplify the online purchase of clothing. Webcams also found their way into pop culture , for example with the Chatroulette website or Omegle in 2009, websites for video chats. Here users can exchange ideas with strangers via a webcam. The interlocutors are determined by a random generator. The concept of Chatroulette received considerable criticism because of neglected youth protection regulations. Webcams can also be used offline for photo and video recordings.

Some webcams also contain eye tracking functions to track the eyes or special software for motion tracking and detection , gesture control or motion recording up to a 3D scanner .

The first webcam that applies Trojan Room Coffee Pot Camera that of 11 November 1991 to 2,001 images from a coffee machine in the computer lab of the University of Cambridge sent to employees and (as of November 1993) on the web. After a defect in the coffee machine in the spring of 2001, it was auctioned for 3500 pounds sterling (10,452.72 DM) by the online magazine Spiegel Online . It was repaired by the manufacturer Krups and could be observed again through two webcams until summer 2015.

Legal basis for operating a webcam

When recording people, the rights to one's own image and the provisions of data protection must be observed. A webcam may not be used to make any image or sound recordings without the consent of the person concerned, on which persons can be identified. This also applies to features that enable identification. Webcams in public space are subject to these regulations as well as those that are only operated within companies or institutions .

In order to continuously operate a webcam in public space, it should be pointed out that it does not depict people, but only the visible public space. According to the Art Copyright Act § 23, all recognizable persons are only accessories.

Integrated webcam of an iMac

A webcam , web camera or PC camera in the product sense usually describes a rather low-priced camera for connection to the PC . Usually the USB interface is used, few cameras (often of higher quality) use the FireWire interface. In addition to being used to operate a webcam on the Internet (see above), web cameras are also used for purposes such as B. video conferencing is used. Usually web cameras only have a limited resolution, e.g. B. 640 × 480 pixels ( VGA ). This resolution is usually sufficient for the intended purposes. Webcams are also an inexpensive replacement for the expensive CCD cameras used in astrophotography , but they are also suitable for taking pictures through a microscope . Some manufacturers also offer cameras specially equipped for use as Internet webcam ( network cameras ), which are connected directly via Internet protocol via Ethernet or WLAN .

Important criteria when buying a web camera are e.g. B. Resolution, color support and the connection standard used (e.g. USB). When using it for video conferences or other "live" purposes, it is important how many images per second the camera can record. The resolution often has to be reduced in live operation, which limits the possibilities for use. When used outdoors, both the image quality at night and in strong light or direct sunlight (e.g. from a low-lying sun) are important. In some cases, webcam functions can be added to game consoles using special accessories. On an Xbox console , for example, this works with Kinect and on a PlayStation console with EyeToy or PlayStation Eye . In addition, however, they mostly serve to control and record movements. Well-known manufacturers of webcams are Logitech , Microsoft , AVer Information , Polycom , AUKEY , TeckNet , Havit and Lumens .

There is several software available for webcams that influence the view of the webcam image or help to record and process webcam transmissions. These include B. inserting pictures, backgrounds, texts, visual effects and animations on the webcam screen or changing the video and audio track. Well-known programs are e.g. B. ManyCam or YouCam from CyberLink . Most video editing software also supports webcam recording. Some programs also support fun functions such as face swap , the fake of a webcam transmission or exchanging and synchronizing the face with animal figures (e.g. with the FaceRig software ) or emojis ( Animoji ). There is also software to set up surveillance and espionage systems or to use the webcam as a motion detector.