One of the main objectives of the mission was to test a new type of solar-electric powered ion drive and new navigation and communication technologies. SMART-1 was the third probe to use this propulsion system (the first was the American Deep Space 1 , the second the Japanese Hayabusa, launched in May 2003 ).

After it had swung into an orbit around the moon, SMART-1 examined the chemical composition of the moon's surface from mid-November 2004 and looked for water in the form of ice. Science gained data to explain the formation of the moon around 4.5 billion years ago.

The probe was developed within four years. The main contractor was the state-owned Swedish Space Corporation (SSC) . The SMART-1 mission cost 110 million euros and thus only around 20 percent of a typical European space mission. Modified copies of some instruments from SMART-1 started with the Indian lunar probe Chandrayaan-1 .

With the solar panels extended, it had a span of 14 meters, all other systems including the drive and instruments were housed in a cube with a side length of one meter. When developing the probe, great attention was paid to the space-saving design of the individual systems. For example, the D-CIXS X-ray telescope was only 15 centimeters wide and weighed 5 kilograms. The probe had a launch mass of 367 kilograms (including fuel and support mass). 19 kilograms of this came from the payload. 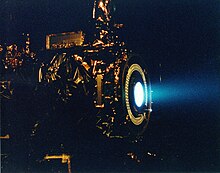 A NASA ion engine during a test run

The energy for the new type of ion engine was generated with the help of solar cells . The “ Hall Effect ” drive used an ionized noble gas as a supporting mass . The engine produced only a relatively small thrust of 70 millinewtons, which is roughly the weight of a sheet of paper. To do this, the xenon left the drive at tremendous speed, creating a high specific impulse . The fuel could be used extremely efficiently. Since an ion engine, in contrast to chemical engines, can accelerate not just for minutes, but for months or even years, the achievable top speed is very high. Overall, this effective technology requires significantly less propping mass than a conventional chemical engine has to carry with it in terms of fuel . This enabled more scientific devices to be integrated into SMART-1. On board were about 84 kilograms of xenon (in a 60-liter pressure vessel) and 19 kilograms of scientific instruments. SMART-1 used the ion thruster almost exclusively during the entire mission. While NASA's Deep Space 1 probe, launched in 1998, still used a conventional chemical engine to escape the Earth's gravity range, SMART-1 always remained in the Earth's sphere of influence (limit at around 1 million kilometers).

The probe used a new type of navigation system called OBAN (OnBoard Autonomous Navigation). This functioned completely autonomously, it followed a preprogrammed flight path fully automatically. The probe takes pictures of the earth, the moon and the stars every two minutes and compares them with each other and calculates the position in space and automatically corrects the course. With this system, there was no need for a ground team to constantly take over the navigation of the probe. Thanks to OBAN, the ground station only made contact with the probe twice a week for eight hours each, which led to enormous cost savings for the ground team.

Like the American Mars Reconnaissance Orbiter (MRO), SMART-1 used the new Ka-band for data transmission on a trial basis. This uses frequencies in the range between 32 GHz and 34 GHz. In addition, however, the traditional X-band (7–8 GHz) was also operated. Since 2002, ESA has been experimenting with communication via lasers in orbit. SMART-1 carried a receiver for the technology called LaserLink . A 28 W laser pulse was emitted from a ground station on Tenerife, which was then received by the probe. In doing so, conclusions were drawn about the absorption and scattering of the signal in the earth's atmosphere.

SMART-1 was the first space probe to use turbo codes , a novel, highly efficient error correction method , for communication.

The probe carried different cameras for visible and invisible radiation. The AMIE experiment was an ultra-compact optical camera that took pictures of the moon. An infrared spectrometer (SIR) created a mineralogical map of the moon and the X-ray telescope D-CIXS looked for the signature of water on the surface. Further experiments dealt with the influence of the moon on the solar wind and with the X-ray activity of the sun.

SMART-1 was launched on September 27, 2003 at 11:14 p.m. UTC from the Kourou spaceport in French Guiana, South American, on board an Ariane 5 launch vehicle, initially into earth orbit at an altitude of around 4,800 kilometers. That took about 42 minutes. In addition to SMART-1, two communications satellites , the Indian INSAT-3E and the e-Bird from Eutelsat , were also on board the rocket as the main payload. Originally, SMART-1 was supposed to "spiral" to the moon by March 2005. But since the ion drive worked better than the ESA scientists had hoped, the probe was able to swing into orbit around the moon on November 15, 2004 at a distance of 5000 to 6000 kilometers.

On January 26, 2005, the orbiter began photographing the lunar surface from a near-surface orbit. Four weeks later, SMART-1 reached its very elliptical orbit at a distance of 300 km from the South Pole and 3000 km from the North Pole and held it for 5 months. Due to the good progress, the ESA extended the mission by one year in February 2005.

The impact observed by the Canada-France-Hawaii Telescope

The end of the mission was set for September 3, 2006 at 5:41 am UTC. The unexpectedly large remainder of the remaining fuel was used to raise the orbit by a few kilometers so that the impact of the probe could take place on the Earth-facing side of the moon and thus observed from Earth and the ejected material analyzed. In fact, the probe hit at exactly 5:42 a.m. and 22 seconds. According to the lunar coordinate system, the point of impact was 46.193 degrees west and 34.262 degrees south in the formation Lacus Excellentiae ("Lake of Excellence"). The impact speed was about 2 km / s, the impact angle between 5 ° and 10 °. The exact point of impact could be determined in September 2017 using high-resolution images from the Lunar Reconnaissance Orbiter . On impact, SMART-1 had made a furrow 4 m wide and 20 m long in the surface of the moon.