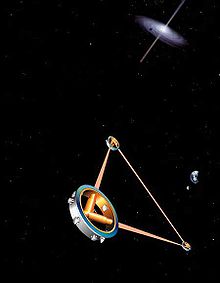 The Laser Interferometer Space Antenna ( LISA ) is a concept for an interferometric gravitational wave detector in space . Three satellites are a triangle with 2.5 million kilometers form side length to with laser interferometers for gravitational waves to look for. This ESA project was started jointly by ESA and NASA , but NASA withdrew from the project in 2011 due to budget cuts. In 2017, ESA selected a revised LISA proposal for a design study; the decision to carry out the mission should be made by 2025 at the latest.

An international consortium of scientists had developed the Evolved Laser Interferometer Space Antenna ( eLISA ) project on the basis of LISA in order to reduce costs after NASA's exit. The original plan for LISA was 5 million kilometers of arms. The length of the arms was reduced to 2.5 million kilometers, the satellites would have been brought into space with Soyuz rockets and eLISA / NGO would not have been slowed down in order to save fuel, but would have flown away from the earth and therefore only for can work for a maximum of 6 years.

The eLISA / NGO project was submitted in January 2012 as one of three candidates for the Cosmic Vision program. In May 2012, however, ESA decided that the JUICE project and not eLISA / NGO would be pursued further. On May 5, 2013, ESA announced two more so-called “Large (L-class) missions”. The evaluation of eLISA / NGO was positive on November 28, 2013, but it will not start before 2034. Under the name New Gravitational Wave Observatory ( NGO ), the project was taken up by ESA as an L3 mission under the theme “The gravitational universe” in the further planning.

After LIGO had proven the local measurability of gravitational waves in 2015 and in 2016 the ESA mission LISA Pathfinder was able to test important techniques for the later satellites, the project was expanded and renamed LISA again. It was included in ESA's science program as a large-class mission in June 2017 . In 2017, ESA decided to largely implement the original plan for LISA - without NASA involvement. A first review of the entire concept was completed in January 2018 and was very positive, the way for the development of the technology is clear. The start is planned for 2034 Template: future / in 5 years.

The aim of the project is to measure gravitational waves that pass through the detector. LISA will be most sensitive in the frequency range between 0.1  mHz and 1 Hz. It differs in this from detectors installed on earth, which can only examine higher frequencies.

LISA will be sensitive to gravitational waves from superheavy black holes in a large part of the observable universe and thus be much more sensitive than terrestrial detectors like LIGO . It is possible that those waves that originate from the Big Bang will also be detectable . It should also be possible to measure changes in spacetime at HM Cancri .

The planning for LISA consists of an arrangement of three space probes , which circle around the sun in the form of an almost equilateral triangle behind the earth along the earth's orbit . The distance to the earth is up to 70 million kilometers. The satellites together form a laser interferometer with arm lengths of 2.5 million kilometers.

With the LISA Pathfinder (LPF) mission , key technologies for LISA were tested. The LPF satellite launch, which had been postponed several times, took place on December 3, 2015. The measurement accuracy exceeded the requirements by five times. The heart of LISA Pathfinder was finally tested at the University of Glasgow and is now integrated into the LISA Technology Package. The function of another key technology is tested using GRACE-FO .