The tasks of the SOHO include numerous experiments that serve to study the sun . The SOHO brings together European and US probe plans from the 1980s. ESA is responsible for managing the mission and providing nine experiments. NASA provides three experiments and was responsible for the launcher. Communication with the SOHO and its control is also guaranteed by NASA.

SOHO started with an Atlas IIAS

SOHO is a three-axis stabilized, modular satellite that is permanently aligned with the sun. The probe is around 4.3 × 2.7 × 3.7 meters in size (9.5 meters with unfolded solar cells) and weighs around 610 kg (1,850 kg at launch). Images and data can be sent to earth at a rate of 200 kbit / s via the high-gain main antenna. The facilities of NASA's Deep Space Network serve as receiving stations . SOHO was built by a European team led by Astrium .

SOHO was built in Europe and launched on December 2, 1995 from Cape Canaveral Air Force Station with an Atlas II AS rocket.

SOHO is in a halo orbit with a radius of 600,000 km around the Lagrange point L 1 , at a distance of approximately 1.5 million kilometers from Earth . In this orbit , because of the gravity of the earth, it has the same orbital time around the sun as the earth and can stay there without using any energy . Seen from the earth, it is always close to the sun, but always has a sufficient distance so that the radio communication to the earth is not disturbed by parallel solar radiation.

In 2003 one of the main antenna alignment motors failed. By recording the data in the probe, improved data compression and the use of larger receiving antennas on earth, the data could so far be transmitted via the low-gain replacement antenna without any significant impairment.

The most critical situation already existed in the initial phase of the mission. On June 25, 1998, contact with the probe was lost during normal orbit maneuvers. A re-establishment of the radio connection did not succeed at first, so that SOHO seemed almost lost. Only with the help of the radio telescopes in Arecibo (305 m diameter) and Goldstone (70 m) was it possible to locate SOHO a month later and to re-establish contact on August 3, 1998 with the help of the Deep Space Network . A lengthy and difficult reactivation procedure followed. Ultimately, SOHO was fully operational again on November 5, 1998 and 133 days after the communication breakdown.

SOHO is still a flagship solar research probe. The mission was extended to December 2020. SOHO was able to observe more than two of the eleven-year solar cycles. 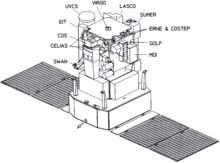 Below is a list of the SOHO facilities and experiments :

Although the probe was not originally intended for this purpose, SOHO was also able to detect 4,000 previously unknown comets . The comets were noticed when they moved through the field of view of the imaging LASCO detector. In order to be recorded by LASCO, these comets have to come closer than 800,000 km to the sun, which is why this group is also known as Sungrazer (sun stripes) .