This article explains the district. For other meanings see Neukölln .

Neukölln is the eponymous district of the northern and cultivated at the densest part of the Berliner Neukölln . Neukölln was an independent town until 1920, and until 1912 it was called Rixdorf . Occasionally, the district is also referred to as Nord-Neukölln to distinguish it from the district .

The area northeast of Hermannplatz ( Reuterkiez ) belongs to the colloquial so-called "Kreuzkölln" ( suitcase word from Kreuzberg and Neukölln). 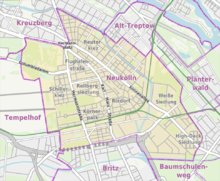 Overview map of the Neukölln district

Other city quarters or residential areas in the district are:

The former Rixdorf was founded around 1200 by the Knights Templar who were based in Tempelhof . Archaeological traces of a Slavic pre-settlement have not yet been found. By Wüst If the village was in a farmyard transformed the Knights Templar. In 1318 the possessions of the Brandenburg Knights Templar were transferred to the Order of St. John because the Knights Templar had been dissolved in 1312. For this reason, the coat of arms of the district bears the Johanniterkreuz . According to the founding document of June 26, 1360 in Middle Low German , the former farm of Richarsdorp (Richarstorp / Richardstorff) was converted into a village with 25  Hufen . This document, which has been missing since 1945, not only contained the first documentary mention of Rixdorf, but was also the only existing village foundation document for Brandenburg. According to the content of the document, Rixdorf had to pay taxes to the pastor of Tempelhof, so it could not have had his own village church. In 1375 the village of Rixdorf was mentioned in the land book of Charles IV as Richardstorpp , again with the 25 hooves already mentioned in the founding deed, a relatively small number (the average was around 50). However, the Commander-in-Chief of Tempelhof no longer had all rights. The center was on Richardplatz . In 1435 the Johanniter sold all their villages (Tempelhof, Mariendorf, Marienfelde and Rixdorf) to the cities of Berlin and Cölln. At this point at the latest, Rixdorf had its own village church . In 1525 the village is mentioned in documents as Ricksdorf .

Population increases due to immigrants from the 18th century

In 1737, Friedrich Wilhelm I permitted the settlement of Bohemian exiles in Ricksdorf, who had been driven out because of their Protestant belief. These supporters of the Moravian Brethren built their own church and settled in a separate area away from the village green , along today's Richardstrasse . The resulting Bohemian village was finally given its own administration in 1797 as Böhmisch-Rixdorf . The remaining part of the settlement was called (German) Rixdorf at that time .

With the unification of the two independent municipalities Bohemian-Rixdorf and German-Rixdorf on January 1, 1874 to unit community the place Rixdorf had 8,000 inhabitants and grew in the following year to 15,000 inhabitants.

Rixdorf obtained town charter and was given the name Neukölln

On May 1, 1899, Rixdorf, which had 80,000 inhabitants at the time and until then was the largest village in Prussia and belonged to the Teltow district, formed its own urban district and received town rights. In 1903 Rixdorf received its coat of arms with the Johanniterkreuz and the chalice (for the Bohemian religious refugees). The renaming from Rixdorf to Neukölln took place with the consent of Kaiser Wilhelm II on his 53rd birthday on January 27, 1912 and was decided by the authorities because Rixdorf had meanwhile become the epitome of frivolous entertainment for Berliners, the then - and for Part still today - popular hit songs In Rixdorf is Musike expresses this. The negative appearance for the place should be stripped off with the name. The name Neucölln is derived from the Neucölln settlements north of the old Rixdorf, which indicate the location in front of the southern gates of the old Berlin - Cölln (cf. Neu-Kölln ).

With the " Greater Berlin Law " (law on the formation of a new urban community in Berlin) passed by the Prussian state parliament in spring 1920 , numerous surrounding areas were combined to form Greater Berlin and the Neukölln district together with the villages of Britz and Rudow and Buckow to the 14th county . With the administrative reform in 2001, the Neukölln district became the eighth administrative district of the federal capital.

After the Second World War , Neukölln belonged to the American Sector of Berlin and was part of West Berlin until 1990 . The Berlin Wall separated it from the neighboring Treptow district , which was part of East Berlin . Just like other traditional working-class districts in Berlin such as Kreuzberg and Wedding / Gesundbrunnen , which lay along the sector border, Neukölln became increasingly unattractive for the better-off population groups after the building of the Wall in August 1961. It became the preferred place of residence for immigrants and people with a migration background, primarily because of the inexpensive rental apartments . The guest workers , mostly from Turkey , were later joined by people from Arab countries and refugees. In the 2010s, around 15 percent of the residents of the district are of Turkish and 10 percent of Arab origin.

After the fall of the Berlin Wall , the isolation of Neukölln ended, but in the 1990s and 2000s the district became known as a "problem area" and a social hotspot , also because the then district mayor Heinz Buschkowsky repeatedly publicized phenomena such as crime ( procurement and other drug-related crime ), behavioral problems of school dropouts , social neglect and Islamic fundamentalism themed and going on the district administration against them. At the same time, the district has been gentrified , especially in the north of Neukölln, since the 2000s .

Since the administrative reform on January 1, 2001, the Neukölln district has been Berlin's eighth district (previously the fourteenth). Neukölln, Spandau and Reinickendorf remained the only ones without being merged with another district due to their size of more than 200,000 inhabitants.

In 2018 the Berlin Senate published a general development plan for the city. This also includes project ideas for the development of an eleven hectare area on Koppelweg, north of Mohringer Allee and the Britzer Garden . The previously agricultural land should be building land rezoned be on which houses different types of houses with a total of 150 apartments, a primary school and day-care centers arise. The areas are only partially owned by the municipalities, but private owners should also be encouraged to undertake corresponding construction projects with a share of social housing.

As early as the 19th century, with the rapid population growth, the need for an extensive school building program became apparent. Towards the end of the century, at the instigation of the local council, in addition to the higher educational institution, the Städtische Realschule and the Progymnasium , seven community schools each, separately for boys and girls, were established. There was also a school for the Catholic and Protestant parishes as well as a training school . Two public libraries also contributed to improving education .

Public transport in the Neukölln district

In Berlin-Neukölln, the district's first bicycle street was designated in 2017 on Weserstraße on the section between Kottbusser Damm and Reuterplatz . A second bicycle road followed in 2018, which leads over the Weigandufer . There are plans to convert the section from Pannierstrasse and Pflügerstrasse into a bicycle route in Weserstrasse, thereby establishing a connection with the bicycle route on the banks of the Weigand.

→ Main article : List of streets and squares in Berlin-Neukölln

The longest and most densely built-up streets are Karl-Marx-Straße , Hermannstraße and Sonnenallee .

A remarkable network of artists has developed in Neukölln in recent years.

Neukölln in the media

Sons and daughters of Neukölln 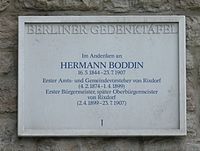 Districts of Berlin in the Neukölln district