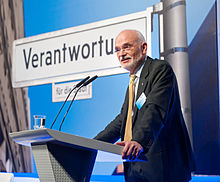 Frank Bielka (born October 22, 1947 in Berlin ) is a member of the board of directors of the Berlin housing cooperative IDEAL. From 2003 to 2014 he was a board member of Degewo, the largest housing association in Berlin with 75,000 apartments.

Frank Bielka attended schools in Neukölln and Kreuzberg . In 1967 he graduated from high school and then began an apprenticeship as a businessman in a newspaper and magazine publisher. This was followed by a degree in business administration at the TU Berlin (1969–74).

After completing his studies, he worked as a research assistant for the SPD parliamentary group (1974–1979) and then as an advisor to the Senators for the Interior (1979–1981) and for construction and housing . His political career began as a district councilor for youth and sport in Berlin-Neukölln (1985–89). During this time, he made a significant contribution to a new building program for day-care centers and took care of the renovation of sports fields in the district. He was then district mayor of Berlin-Neukölln from 1989 until he moved to the state government in 1991 . In the course of reunification, he organized support for the East Berlin neighborhood of Treptow and established town twinning in the former Eastern Bloc, for example in Ústí nad Orlicí in the Czech Republic and in Pushkin near Saint Petersburg .

Until 2002 he was chairman of the supervisory board of the municipal housing company Degewo , and from 2003 to 2014 he was a member of the management board.

At Degewo, he played a key role in the urban redevelopment project in Marzahn . From November 2002 to the end of 2009, Degewo tore down around 3,500 apartments in Marzahn and converted 1,160. The educational associations in Gropiusstadt and Brunnenviertel were also founded on Bielka's initiative . Under his leadership, the principle of urban return was introduced for the first time in the housing industry at Degewo.

Under Frank Bielka, Degewo also advanced the energetic modernization of its holdings. In Gropiusstadt and Marienfelde, the company has been investing a total of around 200 million euros since 2010 to renovate the apartments and residential buildings. At the same time, Degewo pushed the topic of new buildings in Berlin during Bielka's tenure. In 2011 the company announced that it wanted to build new buildings on land from its own portfolio. To this end, an urban development competition was held in Gropiusstadt, which identified the potential for up to 400 apartments.

In May 2014, Degewo was the first municipal housing company to submit applications for housing subsidies to the State of Berlin. In the same month, the first tenants moved into the completed new building in Mariengrün ( Berlin-Marienfelde ). Further projects are under construction.

Frank Bielka is married and has three children.

His change in 2003 from politics to business, to the board of directors of the largest Berlin housing association degewo, which is still owned by the city, sparked intense discussions. The main point of criticism was the fact that Frank Bielka had previously been chairman of the supervisory board of degewo in his role as state secretary and that shortly before his move there was an increase in the management board's remuneration. Bielka was exposed not only to criticism from the opposition, but also from within his own ranks, but his salary was not set by himself, but by the new chairman of the supervisory board and was lower than that of his predecessor.

In connection with the Adlershofer Tor construction project and the acceptance of free tickets for the Hertha BSC VIP lounge , Frank Bielka initially came under fire and was also targeted by the public prosecutor's office. In July 2006, the investigation was closed because of suspicion of corruption in connection with the “Adlershofer Tor” project. In 2007 the Berlin public prosecutor exonerated Frank Bielka from the allegation of infidelity. The investigation had revealed neither corrupt behavior nor any other selfish behavior by Frank Bielka. Rather, his efforts were emphasized to avoid endangering the Berlin state budget and to reduce the project-related risk for the city.

During his time as State Secretary, Frank Bielka answered the minor question from MP Barbara Oesterheld on the subject of “ Asbestos is still a secret issue”. At the time, he saw no need to inform tenants about Floorflex panels containing asbestos . In response to question no. 3 from Ms. Oesterheld, "How have tenants been informed about the proper use of these flex plates in the past?", Frank Bielka replied: "Since there is no risk when the landlord's property is handled properly, there is no tenant information."

Some tenants removed the asbestos-containing floors without realizing the dangers. In 2018, the Berlin regional court reprimanded Degewo for this inadequate information policy.