Berlin-Marienfelde is a Berlin district of the - since 2001 - new - seventh administrative district Tempelhof-Schöneberg in the south of the city.

The Angerdorf emerged, together with the neighboring Mariendorf , around 1220 as a farmers' settlement under the protection of the Komturhof Tempelhof , which was built by the Knights Templar around 1200 or shortly before . The village church was supposedly built as a stone church around 1220, but more likely around 1240. The earliest known documentary mention of the village (as Merghenvelde ) comes from 1344. The village initially belonged with the villages of Mariendorf, Tempelhof and Rixdorf to the lands of the Knights Templar after its dissolution in 1312 in 1318 were transferred to the Order of St. John .

In the land book of Charles IV (1375) Marienfelde was mentioned with 52  hooves , three of which were parish hooves. There were nine farms and a mill, but no jug (only detectable in 1450). In 1435, Marienfelde, together with Mariendorf, Tempelhof and Rixdorf, became the property of the joint council of Berlin and Cölln . In 1450 Marienfelde only had 42 hooves. Marienfelde remained in the possession of the town until 1831. A forge of its own, probably on the village green near the village pond because of the risk of fire, was first mentioned for Marienfelde in 1771; until then only running forge .

There have been frequent changes of ownership since 1831. In 1844 Adolf Kiepert bought the estate and set up a model farm. He owned the estate until 1872; his tombstone is on the south side of the village church.

In the years 1776/1777 the Königsgraben was built between Lichtenrade and Marienfelde. It was built as a drainage ditch on royal instructions to enable the farmers to achieve better yields in the swampy area after the Seven Years' War .

Until 1800 Marienfelde was a small place with less than 200 residents. From around 1850 the number of residents slowly increased. After the opening of the Marienfelde train station in 1875, the development of the northern area began. From 1888, the Neu-Marienfelde villa colony was built on the site of the Hranitzky tree nurseries , west of the railway . During this time the development of the industrial area also began east of the railway. Before the First World War , almost 4,000 inhabitants were counted. The war interrupted the upward trend.

In 1920, with the formation of Greater Berlin , Marienfelde became part of the Tempelhof district . The expansion south of the villa colony began around 1925. In the southeast, between Schichauweg and the state border, a settlement was built along the railway. This was assigned to the district of Lichtenrade in 1938 . Before the Second World War there were over 10,000 residents in Marienfelde.

During the Second World War, the core of Neu-Marienfelde was largely destroyed by bombing . At the end of 1945 the population had dropped to just over 8,000.

After the Second World War, the old and new Marienfelde grew together. Single-family houses and rental apartments were built in the 1950s and 1960s north of the old town center, especially on the southwestern open spaces and the lands of the Good Shepherd monastery . In 1970 about 18,000 inhabitants were registered.

Marienfelde gained historical significance for divided Germany through the Marienfelde emergency reception center . From 1953 to 1990 it was the “gateway to the west” for 1.4 million people on their way to the Federal Republic of Germany .

In the 1970s, the large housing estate Waldsassener Straße and the industrial area Nahmitzer Damm / Motzener Straße were built. By 1977 the number of people living here increased to over 32,000. In 1989 the previous maximum was registered with 33,126 residents. Since the German reunification , the population has decreased slightly.

The old village green has been preserved to this day. By largely calming the traffic , it offers the opportunity to relax. It is marked by the Marienfelde village church , built around 1220 or 1240 . This is probably the oldest preserved building in the urban area of ​​Berlin and one of the oldest field stone churches in the Mittelmark . The village green merges directly into the Marienfelde manor park .

West of the Angers is the former monastery of the Good Shepherd , which was operated from 1905 to 1968 as a home for women and girls.

On the southern outskirts are the Schlehenberg , the Marienfelde amusement park and the Marienfelder Feldmark, a remnant of agricultural use on the edge of the city.

In the northeast of Marienfelde a large industrial and commercial area was created around 1900 along the railway. Well-known companies emerged here, including:

The large commercial enterprises located here, some of which have their headquarters in the industrial area on Motzener Strasse that was laid out in the 1960s, include Daimler , IBM , Klosterfrau and Stollwerck . Offices of the Federal Ministry of Food, Agriculture and Consumer Protection are located on Diedersdorfer Weg : parts of the Federal Office for Consumer Protection and Food Safety , the Federal Institute for Risk Assessment and the Friedrich Loeffler Institute .

On November 23, 2004 seven companies (Bartelt and Son, Real Estate Service Wesner, India-Dreusicke Berlin, Klosterfrau Berlin, Semperlux, Weber, Willy Vogel AG) founded the UnternehmensNetzwerk Motzener Straße e. V. The association should have a competent say in urgent questions to politics and administration and is also involved in social issues, such as setting up a daycare center with opening times that meet the needs of employees. The companies work together on numerous projects, for example in purchasing, training and further education as well as the development of an area profile, and on November 22nd, 2007 they organized the first “Industrial Festival”. The exchange of information and opinions is organized via an internet-based communication platform. This first area-related and self-organized corporate network in an industrial area in Germany was created as part of an EU - funded project financed by the Tempelhof-Schöneberg district . It was accompanied by the offices of Regioconsult Berlin (regional economic advice) and the planning community (urban planning). Around 220 companies with around 7,000 employees are based in this area.

In the refugee camp in St. Mary Allee went through from 1953 to 1990 over 1.35 million German after their escape or exit from the GDR their emergency procedures .

A memorial site was set up here in 1993 and a museum was considerably expanded in 2005 to commemorate life in the camp and the fate of the refugees.

From 1964 to 2008 the camp was also used to receive repatriates and ethnic German repatriates . They came initially from the People's Republic of Poland , then from Romania and in the 1990s after the collapse of the Soviet Union from its successor states.

Since the end of 2010 it has been a transitional residence for refugees and asylum seekers under the sponsorship of the International Federation (IB).

Towards the end of the Second World War, the converter station for the first system for high-voltage direct current transmission was built in Marienfelde (" Elbe Project "), but it was no longer in operation. 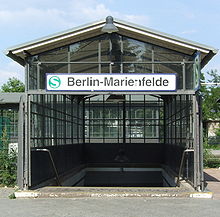 The Dresden Railway has been running through Marienfelde since 1875 . This route is currently used by the S-Bahn (line S2 between Blankenfelde in the Teltow-Fläming district and Bernau ). She has three breakpoints in the district: S-Bahn station Marienfelde , S-Bahn station Buckower Chaussee and S-Bahn station Schichauweg , which, however, for the most part in Lichtenrade is. Marienfelde station was a suburban station on the Dresden Railway with a dispatch building that was destroyed in World War II. What remains is an S-Bahn platform with a covered entrance. A shunting area belongs to the station. The S-Bahn route is identified internally as an SF-Bahn , so it is mainly used by the S-Bahn, but it can also be used by freight trains from time to time.

The only freight trains currently in service (as of 2012) reach the gasoline splitting plant on the site of the former Mariendorf gasworks with tank car trains . Sidings or loading lanes in the area of ​​Marienfelde station have not been used since the early 1990s. The garbage trains of the BSR to Schöneicher Plan, which run three times a day , only ran until 2005. The rail connections on Buckower Chaussee served by Marienfelde station are no longer used and the Motzener Strasse industrial transfer station, which was built in 1971 and has not been used since around 1989, has now been cleared.

Between 1901 and 1904, various high-speed tests with an electric locomotive and two railcars were carried out on the Marienfelde – Zossen – Jüterbog military railway between Marienfelde and Zossen . These vehicles were powered with three-phase current of 10  kV and variable frequency. Power was supplied via three overhead lines arranged one above the other. Speeds of up to 210.2  km / h were achieved.

The following bus lines go to or through Marienfelde:

On the southern outskirts of Berlin, Marienfelde is the junction between an east-west axis (Nahmitzer Damm, Hildburghauser Straße) and the roads leading out of the city from the north to the south, the federal highway 101 (Marienfelder Allee, Großbeerenstraße) and the connection to Lankwitz ( Malteserstrasse).

The B 101 from the Berlin district of Mariendorf to Aue in the Ore Mountains is an important Berlin entry and exit road to the Berliner Ring . The Großbeeren goods distribution center is located directly behind the city limits on this street . This and the industrial and commercial areas in Marienfelde, Mariendorf and Tempelhof ensure lively truck traffic on the main roads in town. 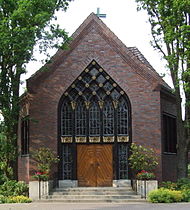 The entrance side of the chapel in the Marienfelde cemetery

The German architect Bruno Möhring designed several houses in Marienfelde . The beautiful Villa Emilienstraße 17 at the corner of Bruno-Möhring-Straße survived the Second World War and shines in new splendor today. Möhring led the renovation of the village church and designed the lovely chapel on the Protestant cemetery in Marienfelde . His own house in today's Bruno-Möhring-Straße 14a is difficult to recognize due to the recent development on the property.

On the property at Berliner Straße 10-18 between Beißstraße and Emilienstraße, the Elvira Castner horticultural school for women was located between 1899 and 1922 , the first opportunity for women to obtain a degree in horticulture and to work as a gardener.

The former Federal President Heinrich Lübke had been director of the German peasantry since 1926 . He had the house built at Emilienstraße 16.

The expansion of the Dresdener Bahn into a fast long-distance line is planned. The connections to the north-south tunnel at the Priesterweg S-Bahn station have already been built.