Blankenfelde-Mahlow is an official municipality in the northern part of the Teltow-Fläming district in Brandenburg .

The community is located south of Berlin . It borders on the Berlin district of Lichtenrade . Other neighboring communities are Schönefeld in the east, Großbeeren in the north-west, Ludwigsfelde in the south-west and Rangsdorf in the south and south-east.

The municipality of Blankenfelde-Mahlow is divided into the following districts:

The community of Blankenfelde-Mahlow was created on October 26, 2003 through the merger of the five previously independent communities of Blankenfelde, Dahlewitz , Groß Kienitz , Jühnsdorf and Mahlow.

Blankenfelde was first mentioned in a document in 1375. However, a significant part of this district, the so-called Gagfah settlement, was not built until the 1930s, after the Süd-Berlin Bodenaktiengesellschaft acquired and parceled the area. This increased the population considerably - from 766 in 1930 to 6,228 in 1939.

Mahlow was first mentioned in a document in 1287. After the place received a train station in 1875 , wealthy Berliners immigrated. In 1945 Mahlow became the district town of the Teltow district until its dissolution in 1952. As early as 1950, the Glasow community was merged with the Mahlow community. With the construction of the Berlin Wall on August 13, 1961, traffic connections to Berlin were cut. Only after the fall of the Berlin Wall in 1989 did these connections get going again. On August 31, 1992, with the gap in the Dresden Railway between Lichtenrade and Mahlow, the S-Bahn connection was restored.

On June 16, 1996 Noël Martin was the victim of a racially motivated assault in Mahlow .

In 2006 Mahlow got a new bypass road , which relieves the busy town through traffic and is intended to reduce noise and CO 2 pollution in town.

For the history of Dahlewitz , Groß Kienitz and Jühnsdorf see the respective local articles. 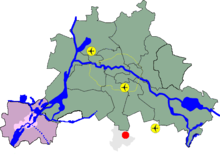 Location on the city limits of Berlin (red point)

The community council consists of 32 community representatives and the full-time mayor. Since the local elections on May 26, 2019, it has been composed as follows:

Local councils are elected in the individual districts:

Schwuchow was elected in the mayoral election on September 22, 2019 with 56.8% of the valid votes for a term of eight years.

Partnerships have existed since 1992 with the district town of Bad Ems in Rhineland-Palatinate , since 2005 with the municipality of Tószeg in Hungary and since 2015 with Kretinga (Lithuania). 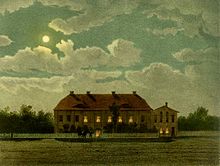 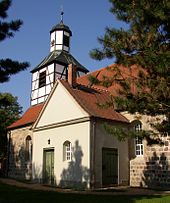 The promenade in the Blankenfelde district was named the most beautiful in Germany in 1933. It was located in the middle of the housing estate that had just been built by Berliners who had moved here and which today forms the center of Blankenfelde. In 2011 the (compensation measure of the airport) renovated Gutspark Dahlewitz was opened to the public again. The estate park is located directly on the L 402 state road between Dahlewitz and Groß Kienitz. Furthermore, the district of Blankenfelde has the nature sports park on the former barracks area in Jühnsdorfer Weg.

Parts of the Diedersdorfer Heide and Großbeerener Graben protected landscape areas belong to the municipality.

On September 23, 2008, the municipality received the title “ Place of Diversity ” awarded by the federal government .

In the south of the community is the largest industrial park in the district of Dahlewitz . Further industrial areas are located in Groß Kienitz and in Mahlow, east and west, directly on the B 96.

Mahlow is located on the main road B 96 between the Berlin border ( Tempelhof-Schöneberg ) and Zossen , the country road L 40 between Potsdam and King Wusterhausen and the L 76 according to Teltow . The closest motorway junction is Rangsdorf on federal motorway 10 (southern Berlin ring).

Since 1992 Mahlow with the stations Mahlow and Blankenfelde (Kr Teltow-Fläming) again with the S-Bahn line  2 from Berlin via Dresden train reached after they originally to Rangsdorf continuous connection in 1961 during the construction of the Berlin Wall separated and was discontinued. The terminus is now Blankenfelde.

In the immediate vicinity is the Berlin-Schönefeld Airport (SXF), which has been expanded to Berlin Brandenburg Airport (BER), but which is not yet in operation. It can be reached from Blankenfelde-Mahlow by train or car in a quarter of an hour.

The soccer team of BSC Preußen 07 Blankenfelde-Mahlow plays in the Landesliga Süd Brandenburg in the 2019/20 season.

Cities and municipalities in the Teltow-Fläming district