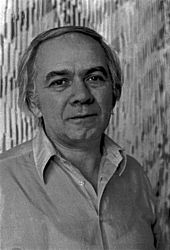 In 1943 Geccelli was admitted to study at the local art academy in his hometown of Königsberg . However, he could not begin his studies because he was called up for military service in the same year . In 1947 he was released from captivity. This was followed by studies at the Düsseldorf Art Academy with Heinrich Kamps and Bruno Goller until 1951 . However, the greatest influence on the young artist exercised Paul Bindel (1894–1973), whose class included Heinz Mack , Otto Piene , Raimund Girke and Hans Salentin . Geccelli toured England in 1949 and France in 1955. After completing his studies, he worked for ten years as an art teacher at secondary schools in Mülheim an der Ruhr and elsewhere.

At the end of the 1950s, his work was related to the ZERO group . On October 24, 1957, he showed his work at the fifth evening exhibition in Otto Piene's studio at Gladbacher Strasse 69 in Düsseldorf. Since 1964 Geccelli worked as a guest lecturer at the University of Fine Arts in Hamburg . In the following year he was appointed professor at the University of the Arts in Berlin (Department 6, Art Education and Art Studies ). He remained in this position until 1988. In 1980 he became a Fellow of the Hand Hollow Foundation in East Chatham through the mediation of George Rickey and was also a visiting professor at Hunter College in New York City . In 1983 he was invited to the Center International d'Expérimentation Artistique in Boissano . In 1994 he moved into his studio in Jühnsdorf , where he lived until his death.

“ Only a few contrasts are necessary to recognize the human figure. The rest is taken care of by stored knowledge: the image that we have of her. "

Geccelli is best known for his "moving figures" influenced by Alberto Giacometti , which he - placed in the middle of the picture - began to dissolve through a fragmentation of the colored surfaces. "In the works of the 1960s, which deal with a spatial occupy a moving figure in the surface of the picture, the human being reduced to outlines appears again and again. This also includes the theming of being and nothing. In the early 1970s, the surface of the picture appeared “as if the walking human figure was letting the air around it vibrate in waves”, until finally, towards the edge of the picture, “these waves released by the figure become their own grid-like structure”, with a basic color of the middle of the image is gradually changed in parallel with horizontal brushstrokes towards other colors.

The artist has received several awards for his work. In 1958 he received the sponsorship award from the state of North Rhine-Westphalia . In 1960 he was awarded the Villa Romana Prize and in 1963 the Ruhr Prize for Art and Science . In 1998 he received the Lovis Corinth Prize .