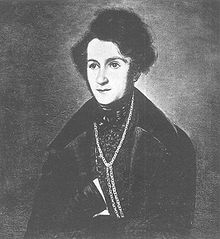 Alexander Duncker came from an aspiring family of booksellers in Berlin . His parents were Carl Friedrich Wilhelm Duncker (1786–1869) and Fanny Duncker geb. Wolff, his brothers the historian and politician Maximilian Duncker (1811–1886), and the publisher and publicist Franz Duncker (1822–1888), co-founder of the Hirsch-Duncker trade unions . Another brother, Hermann Carl Rudolf Duncker (1817–1892), was a member of the Prussian National Assembly and mayor of Berlin.

Duncker's father had founded the publishing house Duncker & Humblot with Peter Humblot in 1809 , which he ran alone after the death of his business partner in 1828. Alexander Duncker began his training there in 1829. After further years of apprenticeship at Perthes & Besser in Hamburg , he founded the Alexander Duncker publishing house in 1837 . In it he mainly brought out works of fine literature and fine arts. His authors included Thekla von Gumpert , Ida Hahn-Hahn , Paul Heyse , Karl von Holtei , August Kopisch , Fanny Lewald , Elise Polko , Christian Friedrich Scherenberg , Hermann von Pückler-Muskau and Friedrich von Uechtritz . He helped some of them to their first notoriety, such as Emanuel Geibel , Wilhelm Jensen , Marie Petersen , Gustav zu Putlitz and Theodor Storm . In 1908, Dr. Hermann Kellermann founded the Alexander Duncker Verlag and moved the company headquarters to Weimar in 1911. From 1950 his son Otfried Kellermann (1915–2001) continued the business from Munich.

Alexander Duncker had extensive political connections and was in lively correspondence with King Friedrich Wilhelm IV of Prussia. He later maintained contacts with Kaiser Wilhelm . Since 1841 he had the title "Royal Court Bookseller". As a reserve officer he took part in the wars against Denmark (1864) , Austria (1866) and France (1870/1871) . Most recently he was a lieutenant colonel .

Alexander Duncker died in Berlin in 1897 at the age of 84. He was buried in the Old Twelve Apostles Churchyard in Schöneberg , where his brother Maximilian had also found his final resting place eleven years earlier. In contrast to the grave of Maximilian Duncker, that of Alexander Duncker has not survived. 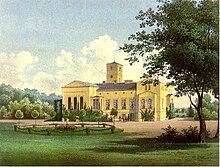 His main work was a graphic collection of Prussian castles, which under the title The rural residences, castles and residences of the knightly landowners in the Prussian monarchy along with the royal family, house fideicommiss and casket goods in lifelike, artistically executed, colored representations and accompanying Text was published by his publisher from 1857 to 1883. In 320 deliveries or 16 volumes, a total of 960 views with color lithographs in the format 20 × 15 cm were published, which are divided among the Prussian provinces as follows: 227 from Silesia , 169 from Brandenburg , 138 from Saxony , 120 from the Rhine Province , 92 from Pomerania , 72 from Prussia , 76 from Westphalia , 52 from Posen and 12 from Schleswig-Holstein and Hesse-Nassau . The price per delivery was 1 ¼ thalers , later 4 marks 25 pfennigs, which corresponds to a total price of 1,360 marks.

Another major project was the publication of Frederick the Great's Political Correspondence , which comprised 24 volumes when Duncker died in 1897 and which had grown to 46 volumes by 1939. Then the Second World War and the division of Germany interrupted the continuation of the collection. It was not until 2003 that the project could be resumed with the publication of the 47th volume.

Duncker was also active as a writer, so his works included: